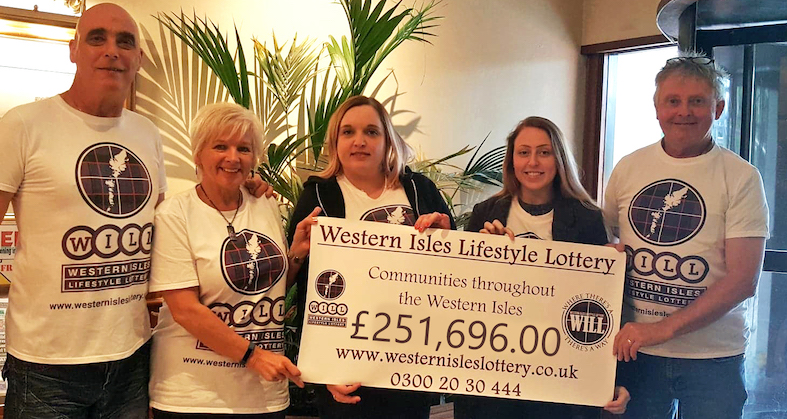 There are big celebrations taking place in the Western Isles Lifestyle Lottery Team camp this month (August 2020) as they cruise past the huge milestone of raising more than £250,000 for local communities across the Western Isles.

This is no small feat for the team of five, considering the local Lottery was launched just three years ago in August 2017. It’s aim was specifically to raise much needed funds to improve the aesthetics and amenities within communities as well as to provide and support public events. The total figure of £251,696 is compiled of the distribution of £170,977 for community projects with £80,719 being shared out in weekly cash prizes to many happy winners. Numerous locals have now won individual prizes over £1,000 each.

Janet Paterson and her husband, Cally, founders of the Lottery, intended the main purpose of raising income being to fund both the Christmas lights displays and the summer planting projects around the town of Stornoway.  However, they decided to include all Western Isles so every area could benefit.

Janet said: “We are delighted to have achieved our goal, and so much more, over such a short period of time. The project grew from the seed of an idea to replace the depleting community funding. The possibility of the initial plan was researched and, once we became aware of its potential, we approached Tony Robson to join us in the venture.

"We began the setting up of The Western Isles Community Society to facilitate the Lottery with Tony as Chairman of the not-for-profit organisation. Emma Fraser was our next recruit who became Secretary and was quickly followed by Shona MacLeod who is our Treasurer.

"The functioning of a Lottery is complex with multiple legal and financial aspects to it. We had to be confident of having a professional set-up with secure banking systems in place so we sourced, and partnered with, Gatherwell Ltd, an external Lottery Management company who have extensive expertise in all areas. Without their guidance and ongoing support, the Western Isles Lottery could not exist and we have gone from strength to strength by having them work alongside us."

Janet continued: “We were clear in our view that each area should receive proportionate funding so we devised a postcode system whereby the proceeds of every ticket purchased would return to the Supporter’s own community. With a community group identified in each area to manage the local funds, we were on our way. Proceeds are paid directly into each Area’s bank account at the start of each month. There are currently around 2,600 weekly ticket supporters and this level is steadily rising. The more that join in, the higher we can raise the weekly prize pot!”

Emma Fraser said: “There has been a lot of hard work going on over the last three years but there have been many highlights to show for everyone’s efforts. We teamed up with Stornoway Amenity Trust to finance and organise the Festive Light displays in the town over the last three years and have helped upgrade the Switch-on Events. The delighted faces on the children at the Peat & Diesel gig in the Nicolson last November made all the hard work worthwhile”.

There have been numerous and innovative projects carried out across the Isles. As well as supporting local groups’ events, in September 2018 the Lottery Team brought Disney Day to Town which proved to be a resounding success and benefitted businesses by bringing large crowds into Stornoway town centre. A Multi-National Day had been planned for this month, on an even larger scale than Disney Day, to bring all residents together to showcase the best of their own country with international acts from the mainland lined up to provide bespoke entertainment. Unfortunately, current circumstances put paid to these plans but the event will go ahead in the future.

Shona MacLeod of the Lottery Team said: “The joy of being part of this team is seeing the funds being put to such good use throughout all the areas. Lots of improvements have been made and a variety of equipment purchased to provide amenities for all ages. When you look at the lists of awards to date, you can see just how beneficial the Lottery has been. Working alongside the Stornoway Amenity Trust has been valuable in identifying where funds can be best used to give positive impact and these ideas have been shared with other communities."

Tony Robson continues to chair the team and emphasised that: “The Western Isles Lottery continues to make an impact on community projects from the Port of Ness to Castlebay.  The islands need positive things in these times and the local lottery is here to do its bit!

"We would not have been successful in the establishment of the lottery without the vital initial support from local businesses and individual supporters joining in to support their communities. We send our sincere thanks to each and every one who has played their part.”

The Lottery is on track to raise over £75,000 for community projects during its fourth year. To join in and help increase this amount, you can log into www.westernisleslottery.co.uk or phone their dedicated helpline on 0300 30 20 444 (local rates apply).

Three cash prizes currently totalling over £600 are won each Saturday night at 8pm. In addition, the 1st prize is raised to £1,000 once per month.

All updates are posted on the Western Isles Lottery Facebook page and their website is live in “real-time” showing all ticket purchases and funds being raised.

Janet Paterson said “Our moto is ringing true – “Where there’s a WILL, there’s a way.”