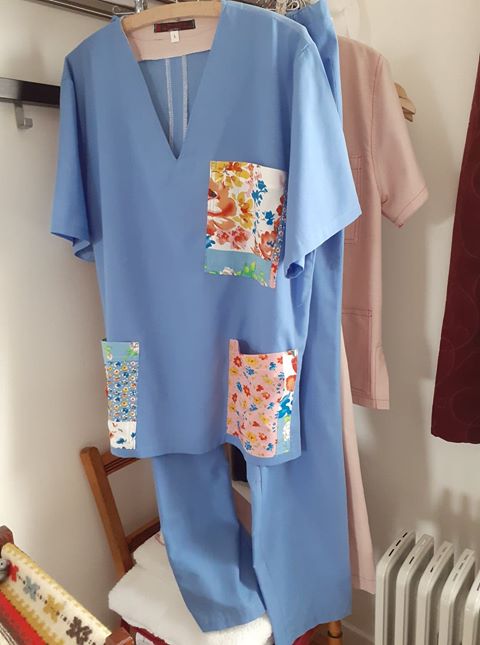 Scrubbing up for carers

One of the biggest stitching projects in memory is about to get into full swing in Uist, as a team of sewing enthusiasts take on the challenge of making scrubs for all of the islands’ care home staff.

Two care homes – Sacred Heart House in Daliburgh and Trianaid Care Home at Carinish, North Uist – between them employ 60 careworkers. Each needs a minimum of two sets of scrubs to rotate between shifts and, until two weeks ago, the total that they had was precisely none.

Now a team of stitchers with willing hands and time to give have stepped in to fill the need, using a supply chain co-ordinated by Vicki Manchester, Uist development worker for Volunteer Centre Western Isles.

Vicki has brought together funding from a generous benefactor, fabric from a specialist supplier, patterns printed by Stornoway Media Centre and findings from Lewis craft supplier Stitch in the Ditch of Tong, to set up what could soon become a veritable production line of care-worker clothing. 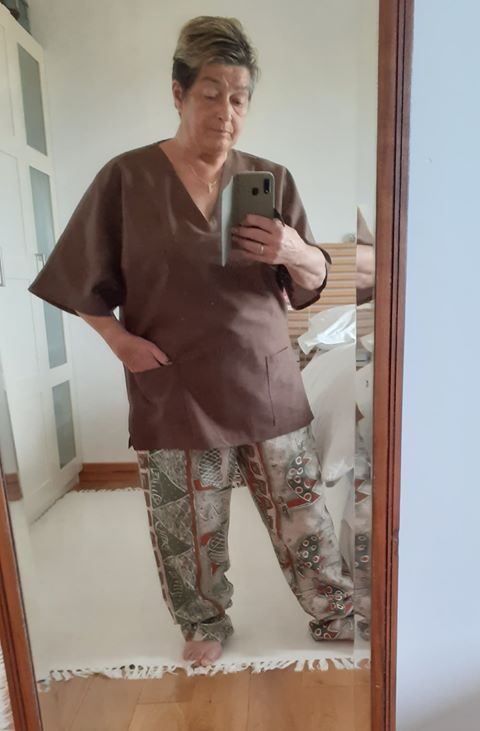 The idea was first put forward by North Uist seamstress Margaret Cowie, above, who had spotted a mainland volunteer project, For the Love of Scrubs, and wanted to do a bit to help.

Margaret said: “I got interested when my sister-in-law posted that she was washing duvet covers to make scrubs. Sheets and duvet covers make ideal material as they are poly-cotton and can be washed at 60 degrees.

“I used to sew for a job, but I’m not very fast as I am doing other things in between. I have a sewing machine, an overlocker and three colours of thread so I got going and initially made six sets of scrubs.

“They were absolutely over the moon with them, just thrilled, even though I was worried about fabric not matching and them having flowery pockets and all sorts. I posted some pictures on Facebook and a friend in Lochmaddy contacted me to say they were looking for scrubs in the Western Isles, so my next four sets were delivered to Carinish Church and they sent them on to Sacred Heart House.

“Then Trianaid decided they wanted some and sent a list of sizes and now Vicki has started to recruit a team and we have met together online to swap tips and make some decisions.”

One decision was what colour fabric to use, from a limited range available, since there’s such high demand UK-wide. The Uist team picked emerald green and all the materials are now on their way, with patterns due to arrive in Uist from Stornoway tomorrow (Tuesday 19 May).

Vicki said: “We’ve got a team of nine and rising every day, including ladies from North Uist, Benbecula and South Uist. We even have one lady in Glasgow, who is a costume maker for the TV series Outlander. She’s been furloughed so she has put her time and her studio at our disposal to start producing scrubs for Uist care-workers.”

Once all the materials arrive this week, Margaret has volunteered to cut the fabric into lengths and package it up with the right thread, tape and facings to make one set of scrubs per bundle. Some ladies are also making scrub bags – which allow a whole set to be put straight into the wash without being handled – and face masks.

Vicki calculates that the team needs to create at least 120 sets of scrubs, but she says how long the job will take is a case of ‘how long is a piece of string?’

“It depends on who we’ve got, how much time they have around childcare, home schooling and their own jobs, what time they want to put in – because after all this is voluntary.

“As far as we are concerned, as long as we have funding for the materials and volunteers to do the sewing, we will keep doing it and we’ll welcome further demand.”

Pictures show Margaret Cowie modelling one of her first completed sets of scrubs and another set waiting to be delivered in her wardrobe.