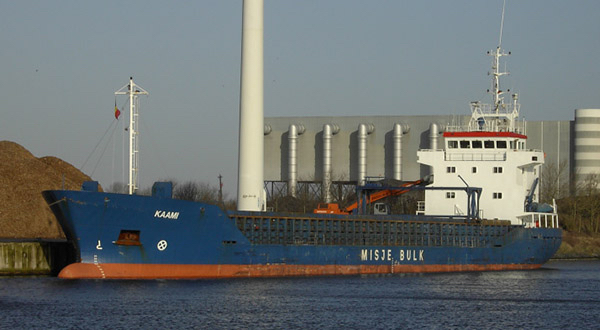 An exclusion zone has today (Tuesday 24 March) been placed around the stranded Norwegian cargo vessel Kaami, which remains hard aground on rocks midway between the Isles of Skye and Lewis.

A specialist salvage team from the Resolve Marine Group has been appointed by the vessel owners and insurers and is expected to arrive on-scene later this afternoon.

The ship grounded at 1.51am yesterday at the Eugenie rocks (Sgeir Graidach), north-west of Fladdah Dhauin and east of the Isle of Lewis. Eight crew members were later airlifted to safety in Stornoway by the Coastguard rescue helicopter R948.

The helicopter crew operated in severe storm conditions in the early hours of yesterday morning, with Portree RNLI Lifeboat and the Northern Lighthouse Board vessel Pharos standing by.

The Maritime and Coastguard Agency Emergency Towing Vessel (ETV) Ievoli Black remains on-scene today, patrolling around the vessel at a distance of between one and two miles. Observations from the ETV have reported damage to the port side of the vessel and a small amount of oily pollution which has reportedly dispersed quickly in the rough sea conditions.

Conditions in the area remain stormy, with winds gusting to gale force 8, occasionally severe gale force 9 and a rough to very rough sea state, with waves between two and six metres high.

The 90-metre general cargo vessel was en route to Sweden carrying refuse derived fuel (RDF) in the form of paper and wood-waste pellets. This is classified as a non-hazardous cargo and is produced from domestic and business waste, shredded and pelletised for use to generate energy.

The fixed-wing aircraft operated by HM Coastguard has today overflown the Kaami to complete aerial surveillance. Technical advice from the salvors is awaited following their initial inspection and both commercial and national response systems have been put on alert.

Stephan Hennig, the Secretary of State’s Representative (SOSREP) for Maritime Salvage and Intervention, is responsible for overseeing the response to accidents at sea. He has established a temporary exclusion zone around the vessel.

The SOSREP and the MCA’s Counter Pollution and Salvage team are in close liaison with the vessel owners and insurers, the Environmental Regulators for Scotland and with other pollution response agencies, including the national response contractors.

See We Love Stornoway’s Facebook page for a video of one of the crewmen being winched aboard Stornoway Coastguard helicopter.