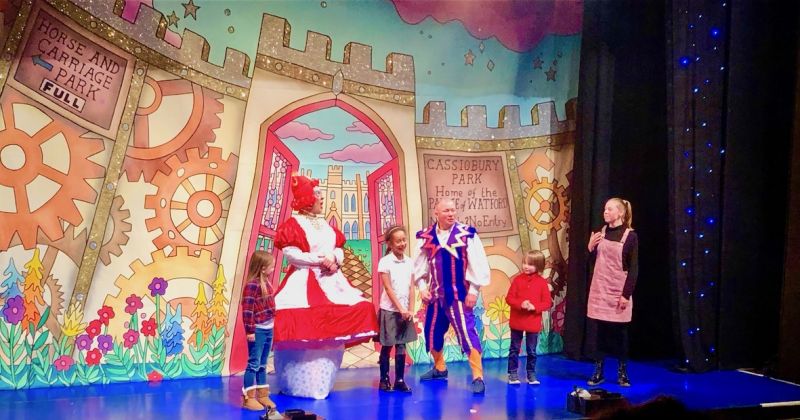 The classic tale of Sleeping Beauty was brought vividly to live on stage – and today (Friday 17) and tomorrow (Saturday 18) a total of three performances are being held each day, with the first one on Saturday as early as 11am.  However, two of today’s shows are already sold out.

Once again, the show proved that – despite the attractions of the on-line world -  modern audiences still love to participate in the shows, with huge involvement in the ritual exchanges between cast and particularly – but not exclusively – the children in the audience.

The all-new set – plus loads of modern production techniques and a great selection of music – kept the great old story vivid and up-to-date.

And the local dancers – getting their annual chance to join professionals on a full-scale stage and in a professional show – were superb in the many scenes where they appeared, both as crowds and supporting performers, of course, as stylish dancers with great costumes.

Stuart said earlier: “This year's pantomime is going to be one of the most extravagant of all, utilising the wonderful talent of the cast we have managed to get together - some of which are Lewis regulars - as well as introducing some great newcomers, not to mention our star this year, Steven Arnold, well known and much loved for his many, many years in Coronation Street.”

David Rumelle, who plays Nurse Nancy Nettlerash, says: “This will be my fourth year in Stornoway.  We always have a good time there.  It’s an absolute joy to do.”

The role of the villain, bad fairy Carabosse, is played by Linda Clark.  Linda, who also appeared in an episode of David Tennant’s Doctor Who, says: “The baddies are so much more fun to play – and you get used to being booed!”

Linda has been to Stornoway three times in the past.  “I first came 25 years ago, when we performed in the Town Hall,” she relates.  “The biggest memory for me was calling my husband from a phone box after a performance in June at 10:40pm and marvelling at how light it was even at that hour!

There were public thanks to the main sponsors and supporters - the Scottish Co-op; Cala Hotels; CalMac and EVENTS newspaper.

You can book here