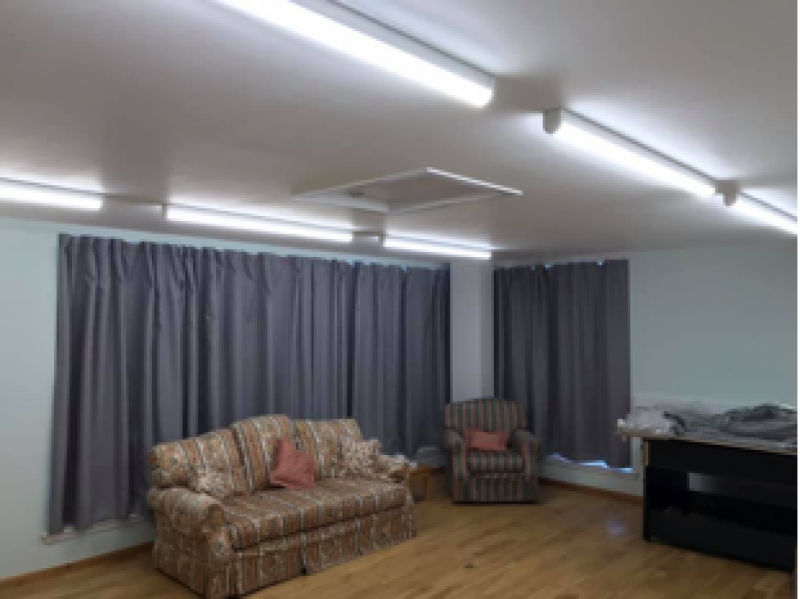 Clan Macquarrie Community Centre in north Lewis is celebrating the success of a programme to make it less expensive to heat – and save energy.

In the spring of 2019, the Centre in Borve was awarded funding of £32,731 from the Scottish Government’s Climate Challenge Fund.

The award was intended to deliver a number of different outcomes – with one of the primary objectives being to achieve improved energy efficiency at the Centre (and, therefore, savings in carbon emissions).

The energy efficiency measures planned included installing LED lighting throughout the building, fitting two new insulated ceilings (Green Room and Meeting Room), fitting thermal curtains to all the windows in the Centre and also installing insulation to two existing ceilings (Garden Room and office) and to some of the steel beams in these rooms.

The CMCC committee is delighted to announce that all these works have now been completed and would like to thank all the contractors involved for the efficiency shown in delivering that vital part of the overall project.

Even at this early stage following completion of the work, there are positive signs of improvement – a building that is using less energy to achieve previous levels of comfort and warmth for users.

Donald “Ba” Macdonald from CMCC expanded on the project detail: “In tandem with planning and seeing to completion of the capital works outlined above, our Committee has been busy delivering energy efficiency workshops throughout the wider community – with particularly sustained and welcome assistance from: Community Energy Scotland; Tighean Innse Gall; Home Energy Scotland, Urras Oighreachd Charlabhaigh; and Urras Oighreachd Ghabhsainn.

“To date workshops have been delivered to the local Young At Heart Group; Sgoil An Taobh Siar pupils and teachers; Sgoil Lional pupils and teachers; various other community organisations throughout Lewis and Harris.  The final workshop is scheduled for those in our community who might be interested in setting up a growing/horticulture group – that will be on 25th February at CMCC”.

Ba continued: “We are also going to host a 2-day training course on 23rd and 24th January, which is approved by CCF and which will be facilitated by qualified trainers from Urras Oighreachd Charlabhaigh.  The course will allow successful participants to communicate key aspects of climate change and carbon efficiency to their own organisations and communities.  It is open to all groups in the Western Isles, is free to attend, and lunch will be provided – but places are limited with pre-registration consequently being essential.  Details are contained within the accompanying poster advertising the event.  E-mail This email address is being protected from spambots. You need JavaScript enabled to view it. if you are interested in attending”

In addition to the building improvements, the workshops and the course provision, Clan Macquarrie has also embarked on an energy efficiency advice blog (see ccfenergyefficiency.wordpress.com) and have added a host of updates and photos of the various project strands via their social media sites (@clanmacq via Twitter and Facebook).

Ba concluded “Clan Macquarrie Community Centre would like to gratefully acknowledge the support received from Keep Scotland Beautiful/CCF and from the individuals, schools and other organisations who have supported our workshops locally.

“We are also very pleased with the contractors selected for the various works and thank them sincerely for carrying out the work in such a timely and co-ordinated manner”.

The CCF is administered on behalf of Scot Gov by the Keep Scotland Beautiful organisation.