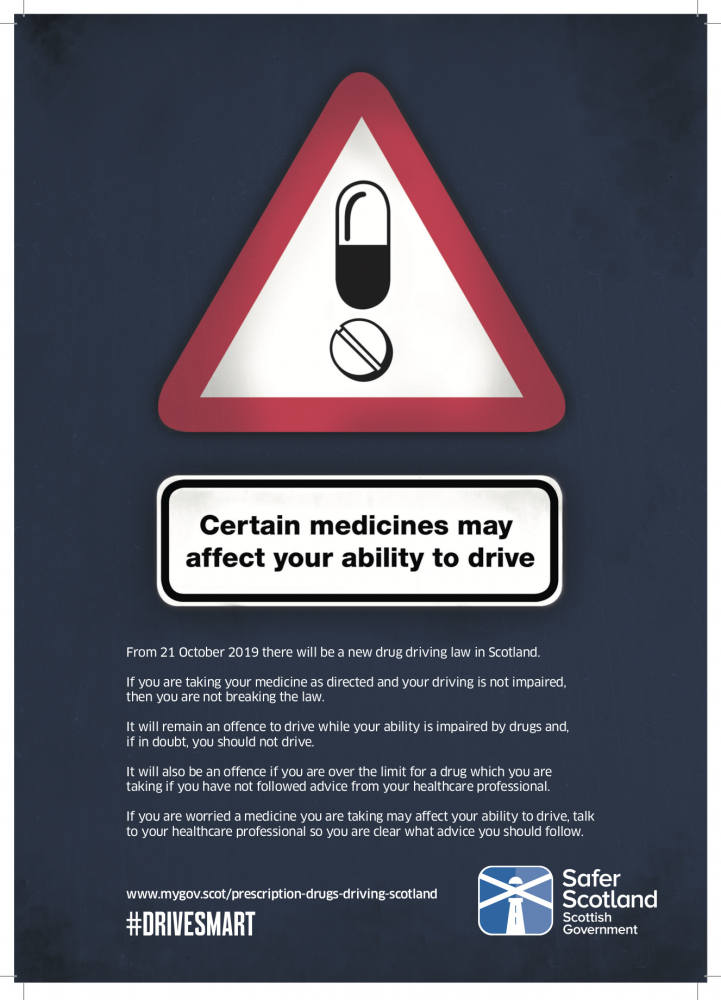 Awareness is needed of a new law introduced on driving after taking certain drugs (including some medicines), says the Outer Hebrides Alcohol and Drug Partnership (OHADP).

The law, introduced in Scotland on 21 October 2019, states that it is an offence to drive with certain drugs above specified blood levels in the body, whether your driving is impaired or not.

The new law sets limits at very low levels for eight drugs commonly associated with illegal drug use, such as cannabis and cocaine, to tackle illegal drug use and driving.

The law also includes eight drugs commonly associated with medicinal use, that are sometimes abused, that have been set at higher limits based on the available evidence of the road safety risk and to reflect their use as medicines.   These are morphine used to treat pain; diazepam, clonazepam, flunitrazepam, lorazepam, oxazepam, temazepam used to treat anxiety or inability to sleep; methadone used to treat drug addiction; and amphetamine used to treat attention deficit hyperactivity disorder (ADHD) and Parkinson’s disease.

Evidence shows that all of the drugs listed in the new drug driving offence result in a significantly greater road safety risk when taken in combination with alcohol, even in small amounts.

Existing law makes it an offence to be in charge of a motor vehicle while unfit to drive through drink or drugs, including medicinal drugs, with the penalties being a minimum 12-month driving ban, up to six months in prison and a fine of up to £5,000.

The new offence of driving while above specified drug limits will operate alongside the current offence and carry with it the same maximum penalties.  If in doubt, you should not drive.

New guidance issued advises that current professional practice when healthcare professionals are prescribing or supplying medicines is that they must take account of their risks, such as whether a patient's driving may be impaired by their medicines, and advise accordingly.

They should also explain the new  legislation, including the statutory 'medical defence' available to patients who have taken their medicine in accordance with the advice of a healthcare professional and the information contained in the leaflet accompanying the medicine.

If you are worried that a medicine you are taking may affect your ability to drive, talk to your healthcare professional in the first instance to ensure you are following the correct advice.