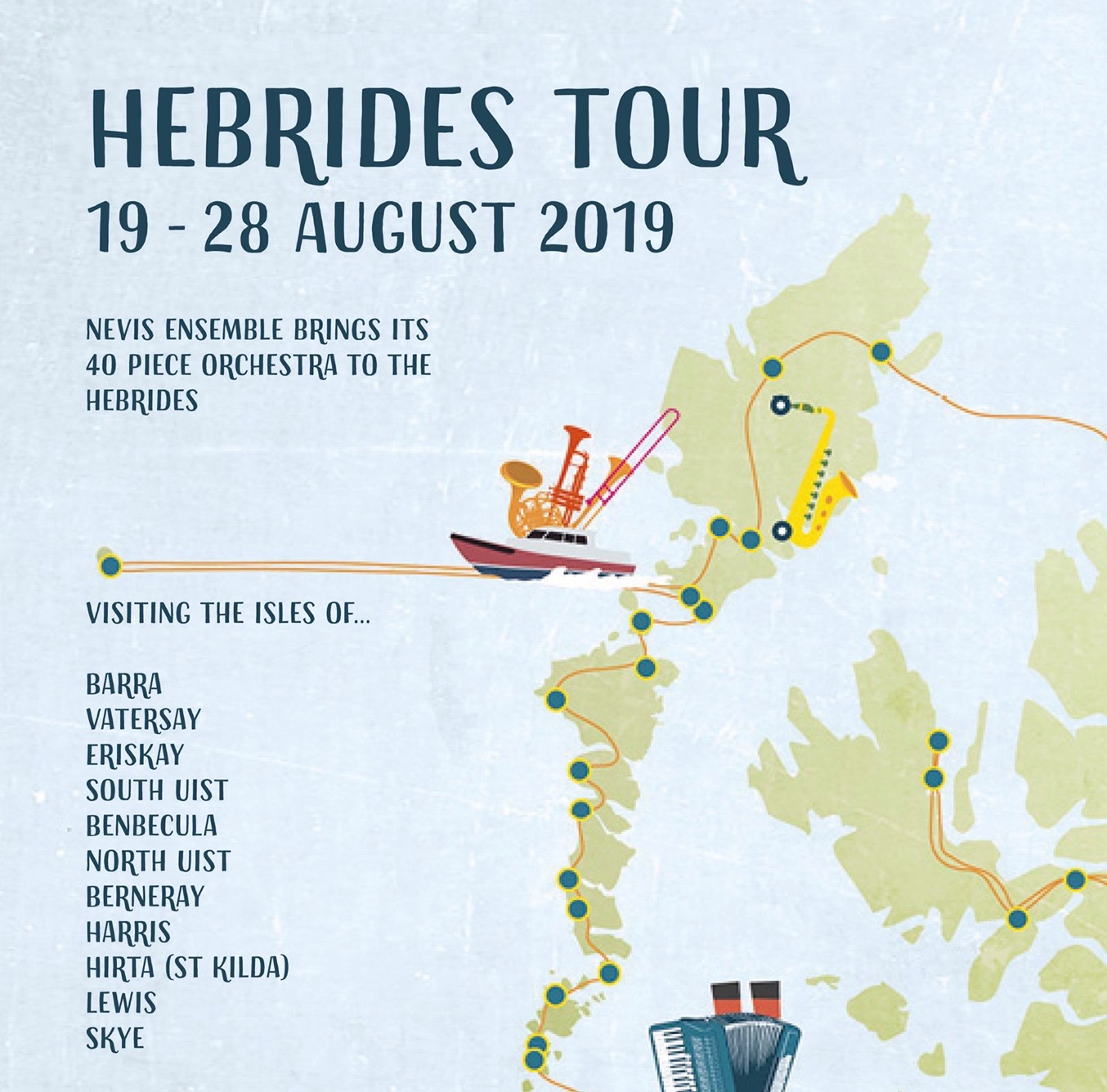 Scotland's only Street Orchestra is heading for the Outer Hebrides, with a full bill of events in Lewis on Monday August 26th.

The Nevis Ensemble has as its vision ‘music for everyone, everywhere’, and they are set to prove it with a series of concerts in community halls, schools and much less traditional venues – such as beaches and airports.

The Nevis Ensemble experience sees 40 young and energetic musicians run out of a bus, instruments in hand, breaking into performance less than five minutes later. They promise that every crowd will hear something incredible and unexpected, in a full-scale orchestral performances of the most diverse music you can imagine.

The Outer Hebrides tour will be conducted by artistic directors Holly Mathieson and Jon Hargreaves Nevis and the playlist will be different for every performance. Works played range from the earliest written-down music, by Hildegard of Bingen (born 1098!) to pop classics by A-Ha, Toto and Shirley Bassey – although some of the more expected classics by Handel, Mozart and Debussy are in there too.

For the Hebrides tour additional features include Scottish ceilidh dances, Gaelic songs, Waulking songs from Lewis and the world premiere of a new work by Rufus Elliot, GEILT (a number of ways), based on the composer’s experiences of hitch-hiking around the Hebrides.

The Nevis Ensemble reach Lewis after a packed schedule of performances which start in Barra today and take in the length of the Western Isles – Barra airport, Luskentyre sands and Berneray’s West Beach are just three of the venues they’ve built into the tour.

A highlight for the orchestra is a ‘side-trip’ to St Kilda. They’ll travel on four chartered boats to Hirta on Saturday 24th August and expect to play to a million seabirds, National Trust rangers and military personnel.

On Monday 26th they’ve teamed up with An Lanntair to take their show to Lews Castle at 1.30pm, where they’re hoping to play to an invited audience of Stornoway Primary School children in the castle grounds.

Next stop is Western Isles Hospital, with a performance for patients and staff at 3pm. The orchestra head west to Shawbost next, performing for staff at the Harris Tweed Hebrides mill and offering up their own arrangement of a Lewis waulking song.

The final highlight (and photostop) of the Western Isles will be the standing stones at Callanish, where the whole orchestra will be performing for an hour from 7.30pm.

As the Nevis Ensemble conclude their tour in the Western Isles, they’ll have played 24 concerts in the islands, before heading for Skye on the Tarbert ferry. The tour has been supported by Creative Scotland, the Robertson Trust, CalMac, Witherby Publishing Group Charitable Trust, Foundation Scotland, William Grant Foundation, An Lanntair, and Cubby’s Midge Salves.