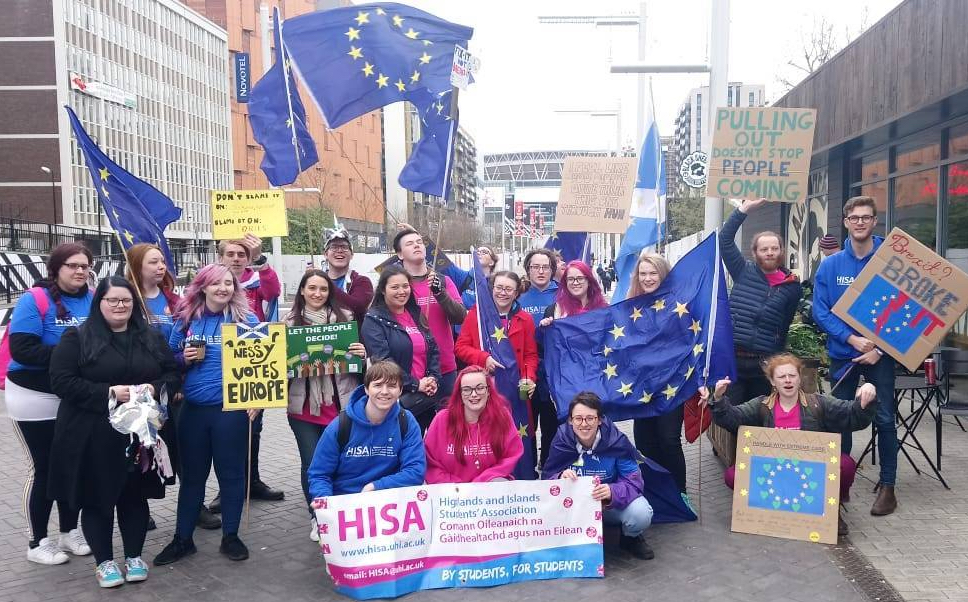 Three students from the Western Isles were among 24 Highlands and Islands students to make the long journey to London on Saturday (March 23rd), taking their place among hundreds of thousands demanding a rethink on Brexit.

And Harris student Kelly Mackay, 17, insists that they have as much right to have their voices heard as older voters, who won’t have to live with the consequences.

Kelly, from Cliasmol, studies at Lews Castle College UHI in Stornoway and was keen to make sure UHI students helped swell the numbers at the ‘People’s Vote’ march in London.

She travelled together with students from Stornoway and South Uist, as well as from Orkney, Perth, Inverness and Oban. The group made two overnight bus journeys from the Highland capital to London and back, with those travelling from Stornoway beginning their journey in the early hours of Friday morning, using ferry and bus to reach Inverness before the coach set out at 8pm on Friday night.

Despite the gruelling journey, Kelly told welovestornoway.com yesterday(Tuesday March 26th): “Brexit is such a big thing and it’s going to affect my future and that of future generations. I felt I needed to go down and represent people in the Western Isles – to make our voices heard so people know that we care and we want a change.

“We want to see Brexit stopped, to revoke article 50 or to hold a new referendum, to give us a better say instead of just letting Theresa May say what she wants over and over again. It needs to take account of the fact that they weren’t honest in the first referendum and also accept that there are now more of us old enough to vote who really care what happens.

Kelly found the experience of the demonstration completely different from what she expected. She said: “It was such a positive experience, really overwhelming. I just felt the strong belief that people care and want something to happen. It was really warming to see so many people standing in solidarity.”

And she believes the stand that people have taken is already having an impact on how things are going in Westminster. “Yesterday in Parliament Theresa May said that Article 50 could be revoked or there could be a second referendum. They can’t ignore a million people marching or six million signing a petition. I think we made a difference.”

Sorcha Kirker, vice-president for higher education with the Highlands and Islands Students’ Association (HISA) said, “It was an absolutely phenomenal experience to be a part of, and I am so proud that we have such passionate students who believe in a better future. As we represent students in such rural locations, it is so important that we are involved in events like this, because we have to fight that much harder to get our voices heard.”

The pictures show Kelly at the march together with other students from the Highlands and Islands.  (HISA and Kelly Mackay).