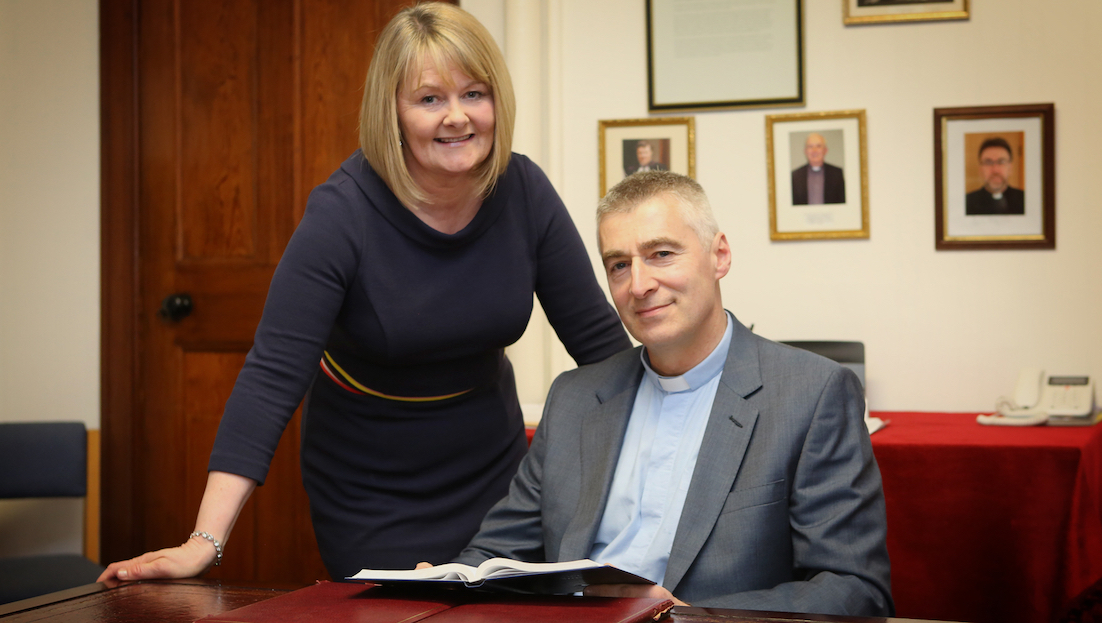 Rev Gordon Macleod - seen above with wife Diane - was inducted as the new Minister of Stornoway High Church of Scotland, on Friday March 22nd - the first time in  more than 100 years that a native of Stornoway has become the Minister at that Church.

The congregation had been without a Minister since August 2017 when previous incumbent, Rev Dr Wayne Pearce, left to take up a new charge in Edzell, Angus.

The Induction Service was led by Rev Paul Amed, Moderator of Lewis Presbytery of the Church of Scotland, who also delivered the ‘charges’ to new Minister and congregation.

Rev Macleod shared his journey into Ministry with Rev Dougie Wolf, now Minister of Barvas Church of Scotland, and it was fitting that Rev Wolf preached the sermon that night.

Following the Service, more than 200 people made their way to Stornoway Town Hall for an uplifting evening of food, fellowship and worship.

Rev Gordon Macleod comes from a well known Stornoway family and his wife, Diane, will continue to run the family business – a busy campsite – as Gordon moves into full time Ministry.

Having spent 10 years in the Merchant Navy and 20 years offshore in the North Sea, Gordon felt the call to Ministry and returned home to complete his studies.

He was ordained as a Minister of Word and Sacrament by Lewis Presbytery in December 2016 and took up the post of part time NHS Chaplain, working in Western Isles Hospital.

Gradually, he felt drawn to Stornoway High Church and took up the role of part time ‘Locum’ there in the summer of 2018.  Blessed under his preaching and pastoral care, the congregation soon called Gordon to their Minister, culminating in his induction to the charge last Friday.

A good number attended Church on Sunday morning as Gordon was ‘preached into’ his new charge by his close friend and former boss, Rev T K Shadakshari, Chaplaincy Lead for NHS Western Isles.

As was pointed out on Friday evening, this is the first time in over 100 years that a native of Stornoway has become Minister of Stornoway High Church and there is a great sense of anticipation as the congregation moves forward under Rev Macleod’s leadership.