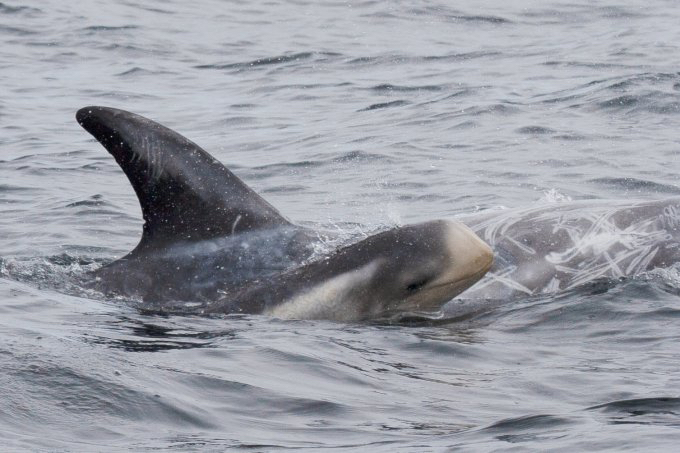 The conservation charity Whale and Dolphin Conservation (WDC) has today (Monday February 18th) published evidence that baby dolphins see the waters around Point, Tolsta and Lochs as a nursery.

The charity want more protection for a population of Risso’s dolphins in a ‘hotspot’ around east Lewis, after recorded sightings of the species showed that some individuals have been returning to the same area for at least 12 years.

The paper, produced by WDC and published online today in the Journal of the Marine Biological Association of the UK, identifies the dolphins’ repeated return to the area as the longest fidelity to a single UK site shown by the species.

Scottish Nature is considering the waters east of Lewis as a Marine Protection Area, and will be consulting on that proposal in the spring.

WDC’s Nicola Hodgins, one of the authors of the report, said: “Our research highlights a unique discovery and a very significant reason for this particular proposed site to be officially made a protected area. It is the only known location in Scotland that Risso’s dolphins rely on to feed and bring their calves and return to again and again, month after month and year after year.”

Local spotting groups including regular whale-watchers at Tiumpan Head helped to collect and document the data, which was backed by photo-evidence from boat surveys and fishing catch evidence. The area is also thought to be an important site for breeding sandeels, one of the species essential to bird species including puffins.

Risso’s dolphins are distinctive-looking and adults often carry multiple scars inflicted by one of their favourite foods, squid.

The high sightings rate of Risso’s dolphin calves occurred year-round, with peak numbers between May and October. A total of 117 recognisable individual dolphins were catalogued from 2010-2017 and calves, including new-borns, were recorded in more than a third of encounters, one of the highest rates anywhere in the world.

The Scottish Nature MPA consultation is anticipated later in the spring, during which time members of the public will be asked for their opinions on the creation of a Marine Protected Area in an area of coastal waters stretching fromthe Butt of Lewis to Loch Erisort. Three other MPAs are also proposed, one to the east of the Shiant islands.

The evidence presented as part of the East Lewis MPA proposal states: “A total of 2,404 shore-based scans carried out from Tiumpan Head between September 2011 and December 2017 resulted in 271 (11.3%) ‘dolphin-present’ scans. Dolphins were present year-round, with a seasonal increase between May and October. ‘Calf-present’ scans only occurred between April and October. Photo-identification images from 28 boat surveys produced a minimum population size of 117 animals.