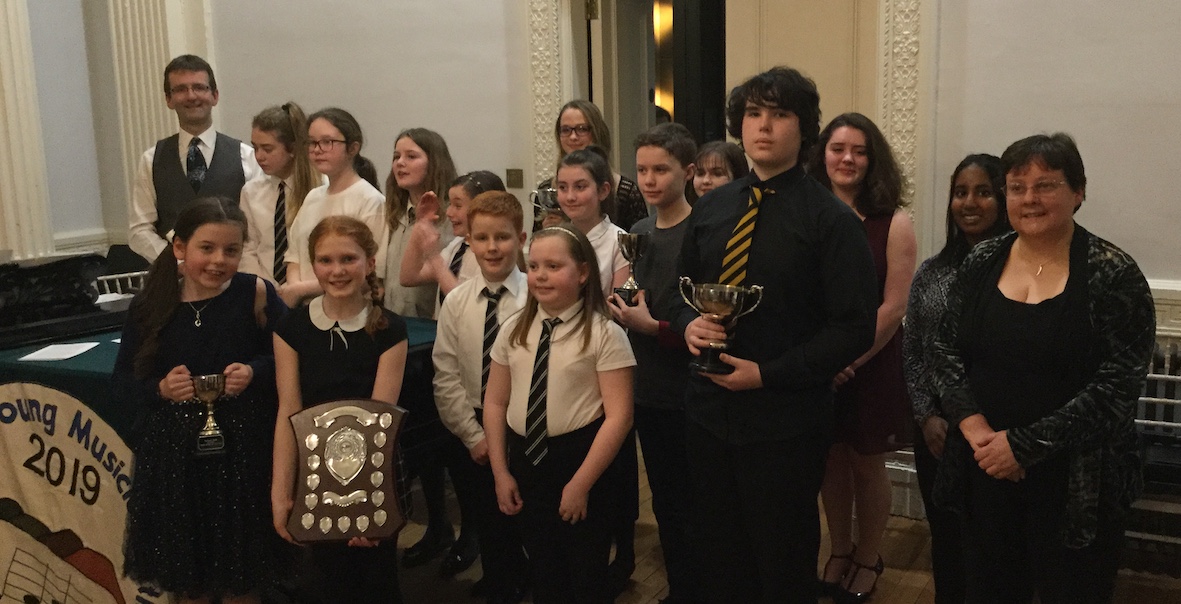 Beginning with preliminary rounds in the Stornoway Primary School and The Nicolson Institute from the start of the day, the Western Isles Young Musician of the Year and Young Singer of the Year contests culminated in a concert and prizegiving event in the ballroom at Lews Castle Natural Retreats.

Prizes and backing come from the Rotary Club of Stornoway and Comhairle nan Eilean Siar as well as the contest’s organising committee.

There were two professional adjudicators – Wendy Ritchie, on right of photograph above, and Michael Bawtree, on left of photograph above,.  A graduate of the Royal Conservatoire of Scotland, Wendy is currently Brass Instructor and Co-ordinator of Performance and Instrumental Music at Gordonstoun School.  Michael studied at Christ’s College, Cambridge and is a lecturer at the Royal Conservatoire of Scotland, assistant music director of the Lyrique-en-Mer festival in France, chorus director of the Edinburgh Royal Choral Union and music director of the Glasgow Chamber Choir.

Speaking before the prizegiving itself, Michael emphasised the importance of the music itself and the role that all the performers and their families – as well as the organising committee – had played in a tremendous celebration of music.

Michael said: “Everyone of you that’s competed today is a winner.  We would like to congratulate all the people that decided to out themselves forward for these competitions.  Those of you that won, those of you that didn’t win, please keep on enjoying your music, that’s why we all do it.  Enjoyment is what it’s all about.”  He also spoke of the benefits to confidence, teamwork and other academic courses from the music studies.

He praised the support of local schools and of Comhairle nan Eilean Siar over many years.

Wendy agreed with Michael and added they had had the “best fun ever” during the event – she praised the work done in the background by everyone involved to bring the event together.

The event saw the largest ever entry in the competitions 20 year history with over 180 young musicians taking part in solo, ensemble and group music making competitions.  This is testament to the hard work and dedication not only of the competitors but also their tutors and teachers.

The competition’s committee continued the development of the annual event by introducing a Piping competition, held at The Nicolson Institute.  Gavin Woods Chair of the competition said later: "We are delighted with the success and popularity of this event.

"We are especially keen to promote an inclusive approach to the competition so that no matter which genre of music you perform or what instrument you play you can compete in the Western Isles Young Musician of the Year.

"It is, of course, important for young people to feel included but equally important for them to be able to hear other young musicians from different musical backgrounds perform and excel."

(Additional information from the organisers has been added since this article was first posted.)