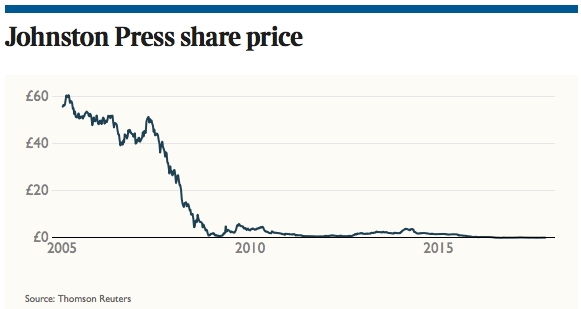 Johnston Press, the group of newspapers which owns the Stornoway Gazette, has given up its long battle to survive.

The group, which includes the i, The Scotsman and The Yorkshire Post, is preparing to enter into administration, the company confirmed last night (Friday November 17th).

The publishing group was trying to refinance £220m of debt that becomes repayable in June 2019.  Over the last 10 years, it had succeeded in cutting its debt mountain back from a reported peak of £793m.

But its advertising income declined over the summer after an earlier apparent return to growth, a setback which it blamed on changes in Google and Facebook algorithms.

In a statement published by the Press Association, the publisher said: “The board has concluded that there is no longer any value in the ordinary shares of the company.”

In an email to staff, the company’s chief executive David King talked of a “brighter future”.

King said the publisher will apply for court approval to be sold to a newly-incorporated group of companies controlled by its creditors.

He informed staff they would continue to be paid and should turn up to work as normal, with their contracts being transferred to the new owners.

In August 2018, the company’s share price spiked, surging by as much as 70 per cent in afternoon trading amid rumours that a mystery buyer was quietly snapping up more stock.

Johnston has now requested the immediate suspension of shares trading on the London Stock Exchange, with a cancellation of trading due to follow.

The company is due to apply for court approval to form a newly-incorporated group of companies controlled by creditors.

The publisher says it has more than 200 titles in print and online.

Back in 2005, Johnston Press was flying high.  That year it was described as “the regional press powerhouse” after it paid out £155m and snapped up the entire local newspaper portfolio of Scottish Radio Holdings – that deal included The Stornoway Gazette which was sold twice in on August 9th during frantic deal-making.

At the time of the takeover, the Stornoway Gazette Ltd - according to its published accounts - made a profit of £350,000 over 15 months trading up to the end of December 2005, with a turnover of £1.6m.

Johnston then splashed out £157.4m on two groups in Northern Ireland and the Republic of Ireland – that was £65m for Northern Ireland's Local Press Group and a further £92.4m for The Leinster Leader Group.

A look back at the annual report for 2006, the year in which Johnston completed the £160m purchase of The Scotsman, shows Johnston’s turnover was up 16%, operating profits stood at £186.8m, operating margins at a 33% and dividends had been increased 11%.

Within the last two years, it is understood Johnston Press turned down an offer from a local group of businessmen of £500,000 for the Stornoway Gazette, valuing it instead at £900,000.