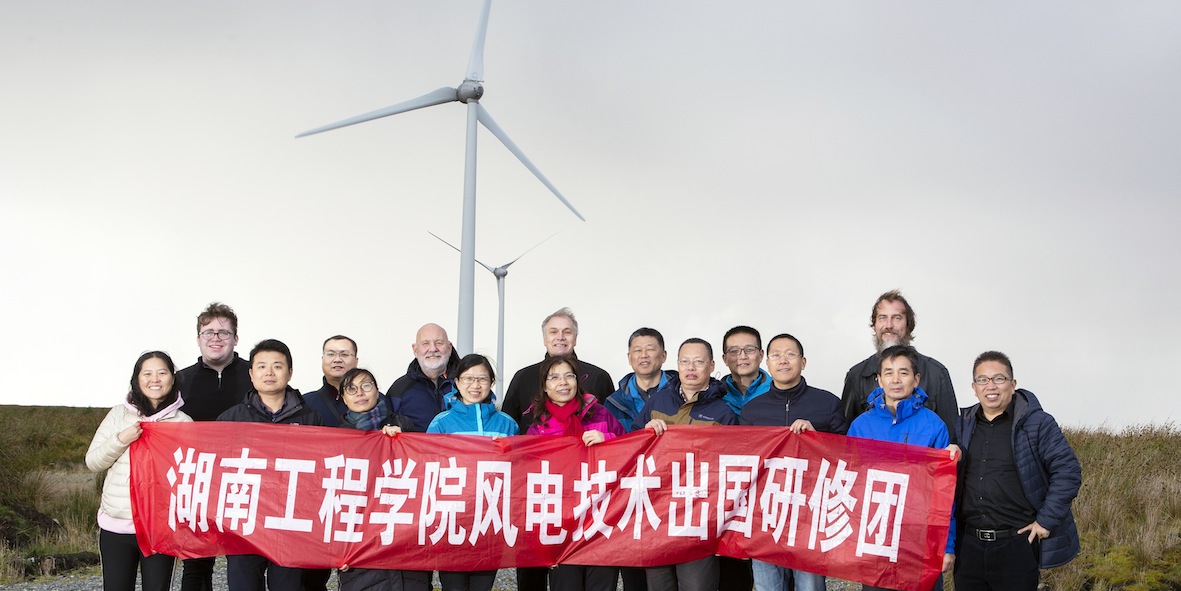 A delegation of Chinese academics in Scotland on an exchange visit with the University of the Highlands and Islands have visited a wind farm for the first time – and it was Point and Sandwick Trust’s community-owned wind farm at Beinn Ghrideag near Stornoway.

The visit to Point and Sandwick Trust’s award-winning wind farm was organised by lecturers from Lews Castle College UHI, who help deliver a degree to the Hunan Institute of Engineering, where this group of professors and senior engineers had come from.

The delegation from the Chinese province of Hunan were in Lewis as part of a two-week tour of UHI institutions – and declared they were “very impressed” with the community wind farm, which returns 100 per cent of its profits to the community for investment in good causes.

As well as getting a tour of the wind farm site, the delegation were also given a presentation by Donald John MacSween, Point and Sandwick Trust General Manager, on the history of the wind farmt.

The wind farm trust has donated £20,000 towards the Lews Castle College Innovation Centre, set up by Dr Chris Macleod, which aims to foster a new generation of high-tech business start-ups and entrepreneurial wealth creation in the islands.  The wind farm trust is working on a couple of other significant projects in partnership with the college, and hopes to be in a position to announce those soon.

The focus of last Thursday’s event, though, was the wind farm itself and Donald John MacSween took the group of Chinese professors and senior engineers, plus college representatives, out to the site for a guided tour in the afternoon, after the morning’s presentation.

Point and Sandwick Trust’s Beinn Ghrideag is the largest community-owned wind farm in the UK with a power output of 9MW and was named ‘Best Community Project’ at the Scottish Green Energy Awards in 2015 in recognition of this.

Donald John said: “It was the first wind farm they had ever visited. They were very attentive. They listened to everything I was saying and the woman who was their spokesperson said that they were deeply impressed with the community’s tenacity and ambition in getting the project done.”

Point and Sandwick Trust had formed the initial steering group, to look at the possibility of developing a community wind farm, in 2005 – and it was to be 10 years before that would be a reality.

Donald John said: “I told them how we had done it – right from the beginning of the concept, when there was 100 per cent support from the community, through to the Environmental Impact Assessments and planning permission, which was a game changer, through to the initial difficulties with the banking sector and then Santander coming to our rescue.

“I think they were shocked by the amount of time it took us to achieve the project because in China these things go from concept to connection to production in a matter of months.”

A group of UHI tutors go out to the Hunan Institute of Engineering twice a year to help deliver the course. Alasdair MacLeod, Senior Lecturer in Energy Engineering at Lews Castle College, is part of that group and was pleased to receive them in Lewis for a return visit, during which they also heard about potential future developments in the areas of wave and tidal power, as well as wind.

He added: “In an afternoon visit to Port of Ness, they gained an appreciation of the wind energy available on the islands!”

Perth College is the main UHI partner in delivering the engineering degree to Hunan, with contributions from Inverness College, Lews Castle College and North Highland College too.

It has been running for around five years. This visit by the Chinese delegation is, however, the first time they have made an exchange visit to Scotland. They also visited Perth College and North Highland College before coming to Lewis.