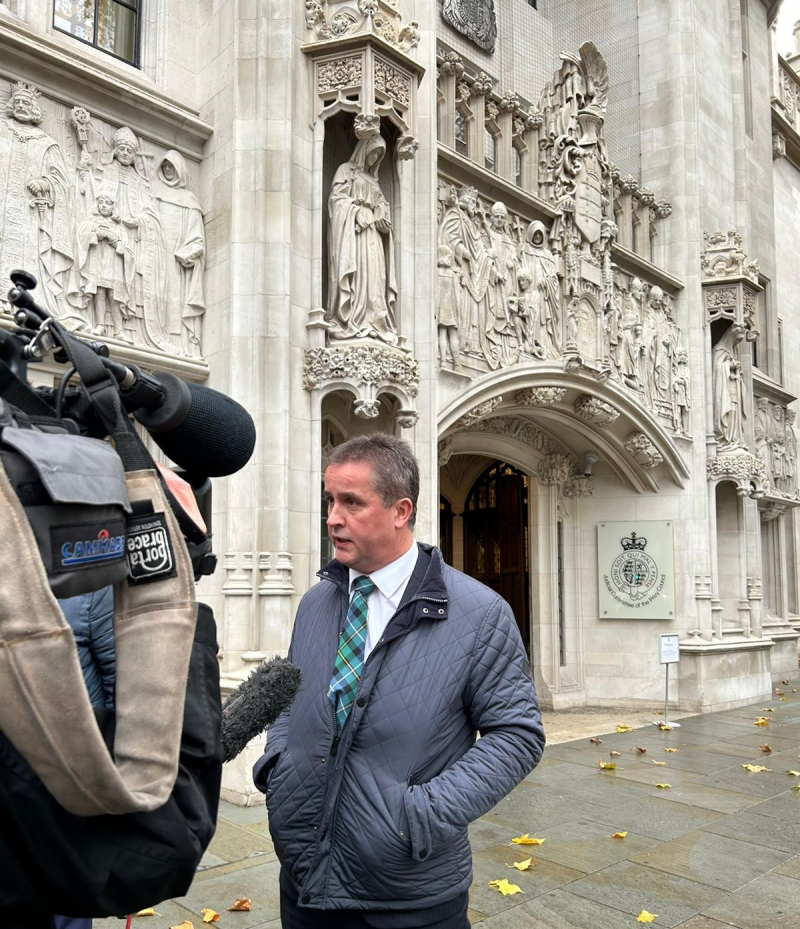 Speaking outside the Supreme Court in London after the judgement this morning, Na h-Eileanan an Iar SNP MP Angus MacNeil said the way forward for Scotland is now clear and using elections is the only option.

Mr MacNeil said: “Plan A is dead, so Plan B is the only way forward.

“The debate now hinges on which election and when. I have been at the Supreme Court this morning to hear the judgement that while a referendum wouldn’t end the UK legally, judges thought that in the politics of this situation that it likely would, and therefore they decided that the Scottish Government couldn’t hold a referendum on Scotland’s independence.

“Scotland is effectively a hostage in the UK under that ruling. However, we can use elections and when the people speak at a ballot box, if they choose independence, this will be recognised internationally.  The only option going forward is to use elections and the debate is which election.

“Personally, I favour calling a Holyrood election to move Scotland on, away from two years of Tory austerity and difficulty that is inevitably coming up.”

But the Western Isles Labour Party has welcomed today’s decision by the UK Supreme Court.

In a statement the local party said – This judgement will be welcomed by the clear majority of Scots who, as opinion polls have consistently proved, want to stay in the United Kingdom, and by the overwhelming majority of Scots of all views who simply did not want a referendum next year.  The SNP have wasted millions of £s of public money on a legal case which even their own Lord Advocate, Dorothy Bain KC, knew was extremely weak.

"Nicola Sturgeon has now claimed the next UK general election is a “de facto referendum” on Independence.  Like the SNP legal arguments which the Supreme Court has just rejected, this SNP claim is without any merit, and will be disregarded by the electorate and other political parties.  The next election is about getting rid of the Tories – and only Labour can do that.

"All this comes at a time when the Scottish Government is clearly malfunctioning.  Despite Nicola Sturgeon having centralised power around herself – she controls the cabinet ministers and MSPs, and tolerates no dissent - matters are going from bad to worse. There is the impression of policy being made on the hoof, repeated and well-documented failures to listen to expert advice, and lack of attention to detail."

"From a local perspective, our MP Angus Brendan MacNeil seems increasingly bizarre and at odds with his own party.  He has today suggested that a special Holyrood election should be held as the ‘de facto referendum on independence’.

"A special Holyrood election would of course require Nicola Sturgeon to resign as First Minister – something she is not about to do just yet.  Perhaps the one thing she has left in common with Angus Brendan MacNeil is a reluctance to face the voters anytime soon."

“We should be clear that the Supreme Court judgement today was about interpreting a narrow question around the provisions of the Scotland Act 1998, as opposed to a judgement on independence itself. Judges interpret the law; not make it. I offer no criticism of the judges and we should all respect and accept the judgment of the Court.

“However, the ruling exposes the limitations placed upon Scotland by devolution. If there is no legal way for Scotland to exercise decisions on its own constitutional future, and the UK Government blocks all other routes, who can credibly claim Scotland is in a voluntary union?

“The UK Government is now regularly ignoring Scotland’s elected parliament. Scotland cannot afford to stay in this union under governments that we generally don’t elect. Democracy cannot be denied forever. The people of Scotland will be given the opportunity to choose their own future at the next UK General Election.

“As the Chair of the Scottish Constitutional Convention Canon Kenyon Wright once said: ‘What if that other voice we all know so well responds by saying, 'We say no, and we are the state'? Well we say yes – and we are the people.’”