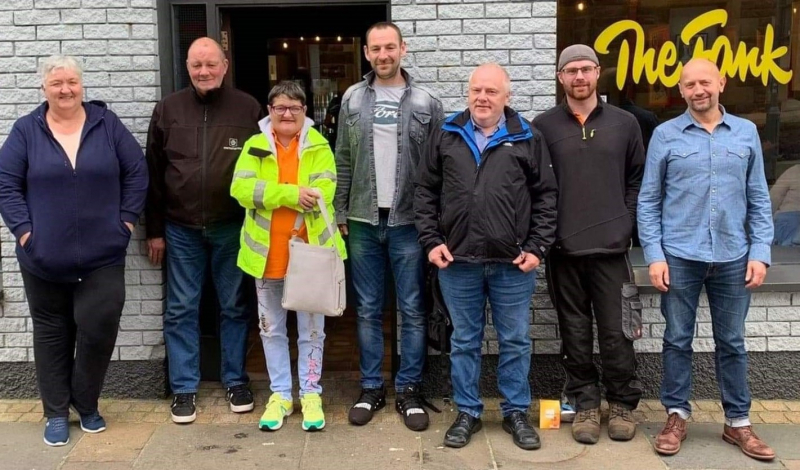 And that’s a wrap for Hebrides Alpha Trading which closed down at the end of October after 15 years of hard work.

The organisation was set up by Shona Macleod who had a vision to offer support to individuals with alcohol and other drug addiction problems who needed the assistance of supported accommodation and therapeutic employment. From having to rely heavily on grants for its first few years, the trading company was self-funding for many years.

The supported accommodation unit in Coll is still operating successfully but the trading company had to cease operations as a result of not having enough service users to fulfil their work commitments.

It had become increasingly difficult in the past couple of years to attract new clients on to the project – and, ultimately, the social enterprise could not carry on without the service users. It was a very hard decision to make, but the whole reason for being in business was to provide therapeutic employment to individuals with addiction problems. Without them, Hebrides Alpha Trading’s reason for being in business had gone, says manager Robert Sinclair.

One of the staff (Ewan) purchased one of the Heb Alpha vans and set up as a self-employed window cleaner on November 1, when almost all of the regular 350 window cleaning customers have gone over to him, so he’s going to be very busy.

Margaret, who has worked for 16 hours a week for the past 10 years, will be finishing in the office at the end of November and Robert, who has been the Project Manager since the project started in 2007, will be made redundant in December.

Trading ceased on 31 October and the last few weeks have been spent trying to sell of all the remaining assets, disposing all of the files that had accumulated over the past 15 years and chasing up outstanding debts, which at the moment are still over £10,000.

The cardboard side of the business was taken over by Angus Maciver Ltd on 1 November, which was a natural place for it to go, as Heb Alpha has been based in one of their buildings ‘The Old Casting Shed’ for the past 13 years.

The clothing banks which Heb Alpha used to empty every week (taking in over 30 tonnes of textiles every year) have been passed on to Bethesda, who have their own banks around the island.

Over the years, Heb Alpha tried their hand at a wide variety of jobs including a car wash on a Saturday in the Comhairle car park before the new Nicolson Institute was built; hiring out bouncy castles, sumo wrestling suits and the Gladiator Duel for birthday parties and Fun Days around the island; and kerbside recycling of plastics, glass, cans and papers, before CnES rolled out their service beyond the 5-mile radius of Stornoway.

These jobs all stopped a while ago but Heb Alpha continued to provide window cleaning; power washing; gutter cleaning; cardboard recycling; clothing banks, a shore tidy for 2 hours a week and house removals for local solicitors when houses were being sold and the contents had to be disposed. They were providing 3 labourers for 2 days a week to a local business for the past 8 months. Heb Alpha also had a cherry picker which was used for the very high jobs which couldn’t be done off a ladder and was often used for putting the bunting up around the town. And finally, they made Harris Tweed clocks out of recycled pallets and Harris Tweed which were sent all over the world.

“Pre-Covid we would have eight people in the Yard first thing every morning, waiting for their job sheets for the day and there was a real sense of camaraderie around the place.

"We started off every day with a short Bible reading and a prayer and then everyone would set off for the jobs for the day. Not every day was fun, especially in the winter-time when it was wet and windy, but everyone would go home tired and satisfied that they had done a good day's work.

“It’s going to be strange locking up the doors for the last time. It has been a very significant chapter in my own life and in that of everyone who has ever worked here. I am unsure as to what I will do next, but I will continue to put my trust in God for whatever the future holds.

“We achieved a lot in the past 15 years and if it were not for the strength, wisdom, courage and direction given by God, we would not have got off the ground all these years ago. We have had so much positive feedback from our customers who are all really sad to see us closing down. This has been very encouraging at a difficult time. As well as thanking all of our customers who have supported us over the years, I would like to put on record my thanks to all of my directors who have served on the Board over the years and who have been of great support and encouragement to me.

“I would also like to thank my family (Marina, Josh and Jodie) who have all gotten their sleeves up and worked on a voluntary basis with us many times over the years and who have been an incredible help to me.

“To God be the glory, great things He has done.