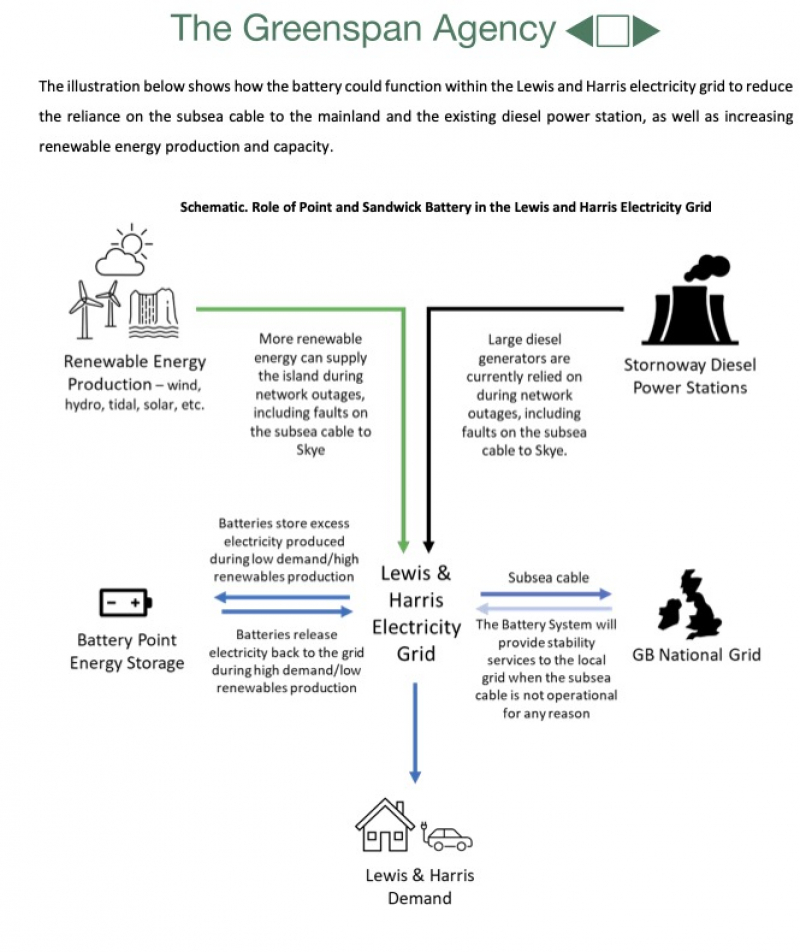 There's an electrifying chance that the battery might be put back into Battery Point in Stornoway!

Point and Sandwick Trust’s plans to boost renewable energy use and keep the lights on have taken a major step forward.

For the community organisation has notified Comhairle nan Eilean of a proposal to develop a 25 MW energy storage park in Stornoway.

Using arrays of lithium-ion batteries to handle power outages, the energy park would also enable a much greater proportion of power demands to be supplied by renewable sources. And cut emissions that harm the environment. (The original of the name for Battery Point was quite different - referring to the array of guns of the one-time Royal Navy Reserve base there.)

The project has been in the works since 2019. Though not a full planning permission application at this stage, the proposal to apply represents a milestone in getting the ambitious project switched on.

The proposed site for the development island is west of Stornoway Diesel Power Station and north of the Marine Coastguard Agency station at Battery Point. This location has been identified due to its proximity to the existing diesel power station and suitable connection point to the 33kV distribution network.

Point and Sandwick Trust is working with The Greenspan Agency based in Edinburgh. In the submission to Comhairle, The Greenspan Agency states: “This scheme will be a high-value infrastructure investment for Lewis and Harris, providing valuable energy storage capacity and improving the reliability and sustainability of electricity supply to the island.”

The project will consist of multiple lithium-ion batteries, power converter stations, transformers, high voltage electricity substation, site welfare units and site access. Though designed for outdoor locations, placing them inside a building is being considered.

Point and Sandwick Trust have conducted detailed technical studies for the project since 2019. However, renewed impetus was provided in 2020 when the subsea cable between the Isle of Harris and the Isle of  Skye malfunctioned, causing total disconnection of the island from the National Grid. The extent of the damage resulted in an 11-month period when electricity was being almost exclusively generated by the diesel power stations in Stornoway and Arnish.

According to the submission to the Comhairle, if the battery project goes ahead, it will help stabilise the local electricity network and allow a much greater proportion of power demands to be supplied by renewable sources.

It would, adds The Greenspace Agency, reduce reliance on the existing diesel power station during cable outages by up to 60%.

The energy park can accomplish this by storing and quickly releasing energy in subsecond timescales to balance supply and demand.

In addition, the battery can store energy during high renewables production/low demand periods and later discharge during peak demand/low renewables production periods. This, it is believed, would be to make better use of the renewable energy produced, resulting in a long-term environmental improvement to supply.

The lifecycle of the proposed battery system is 25 years and requires comparatively little maintenance during this time, continues The Greenspan Agency. The lithium-ion batteries can be recycled and replaced at the end of their design life.