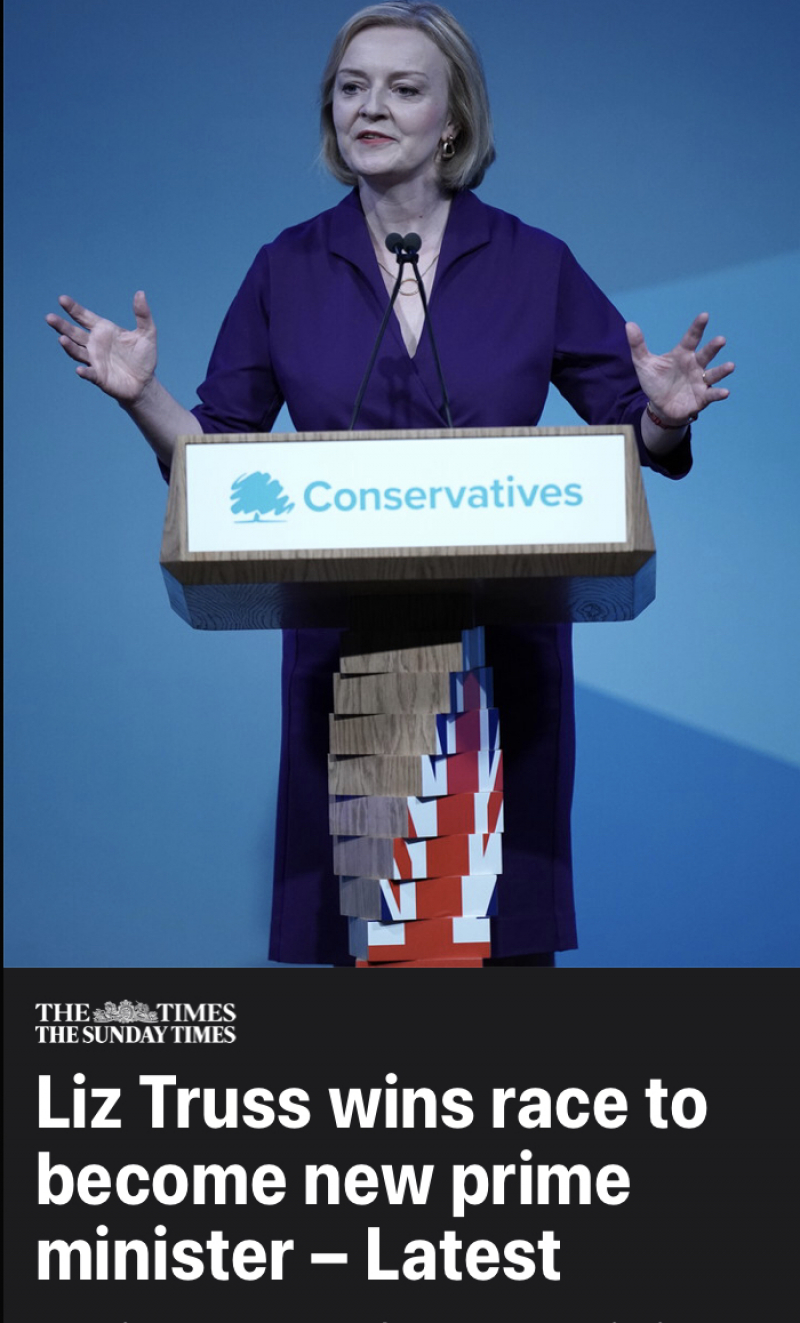 Both the local Labour Party and the SNP have been - unsurprisingly - less than fulsome in their welcome to the new UK Prime Minister who will be formally appointed by the Queen tomorrow (Tuesday September 6) after winning whole-hearted approval of only 81,326 Conservative party members or just 57% of that tiny electorate.

The Western Isles Labour Party said:  "In an uninspiring contest, Liz Truss was elected leader mainly because her rival, Rishi Sunak, was unacceptable to the Conservative Party membership.

"Sadly, doubts have already accumulated about her competence. The evidence has emerged somewhat in the style of the children’s fable ‘The Emperor’s New Clothes’ – all the information is in plain view, but top opinion-formers cannot admit what they are seeing.

"In January 2022 Ms Truss told the BBC - “We’re supplying and offering extra support into our Baltic allies across the Black Sea, as well as supplying the Ukrainians with defensive weapons."  Britain’s Baltic allies are located, strangely enough, on the Baltic Sea, which is 700 miles away from the Black Sea and these remarks provoked ridicule at the time.

"Worse was to come.  On 10 February Ms Truss flew to Moscow specifically for discussions about Ukraine with Sergey Lavrov, the enormously experienced Russian Foreign Minister.  He asked “Do you recognise Russia’s sovereignty over the Rostov and Voronezh regions?” Ms Truss replied “The UK will never recognise Russia’s sovereignty over these regions.”

"However, the Voronezh and Rostov regions are in fact inside Russia itself, and Russia’s sovereignty over them is not disputed in any way - as the British Ambassador had hurriedly to explain to Ms Truss.  These may be obscure regions, but if you’re Foreign Secretary, it is your job to know where places are.  Senior British politicians never make blunders of this magnitude.

"Ms Truss apparently likes to compare herself with Margaret Thatcher.  However, even those who disagreed with Mrs Thatcher’s politics recognised that she worked extremely long hours and was invariably very well-prepared on any important matter she might have to discuss.   Mrs Thatcher would never have allowed Britain to become a laughing-stock by showing ill-preparedness and by displaying a lack of knowledge of basic geography.

"All this is a matter of public record.  Ominously, at the launch of her bid for the Tory Leadership in July, Ms Truss managed to get lost leaving the room – she could not find the exit on her own.  The Mirror reported that even her own staff started laughing at her.  However, it seems that the main Conservative-supporting media have deliberately closed their eyes to her deficiencies.

"Political observers consider the Conservative Party to be incredibly efficient in finding a leader who can win an election – and much of the time, it is.  But in 2001, despite being manifestly unsuitable for the position, Iain Duncan Smith was elected, mainly because he was not Michael Portillo or Ken Clarke.

"Choosing a leader because of who they are not, seldom works out well and indeed, Mr Duncan Smith did not last long.  But now the Tories have done it again and our country will have to live with the ensuing consequences."

Liz Truss said on Twitter: "I am honoured to be elected Leader of the Conservative Party.

"Thank you for putting your trust in me to lead and deliver for our great country.

"I will take bold action to get all of us through these tough times, grow our economy, and unleash the United Kingdom’s potential."

And the new Prime Minister at No.10 will not solve the multiple crises facing the UK, says Isles MP Angus MacNeil, who stresses the only escape route for Scotland is independence.

Ms Truss has stated that she will announce support on the energy crisis within a week but there are no details on what this will involve.

She has already disrespected First Minster of Scotland, Nicola Sturgeon, and the people of Scotland by stating her intention to ‘ignore’ the First Minister despite the success of the pro-independence majority of MSPs in last year's Scottish Parliament election.

Mr MacNeil has written to the new Prime Minister for clarification on whether she will also rule out a Section 30 order for an Independence Referendum. Her predecessors Theresa May and Boris Johnson both rejected this request.

In his letter he states: “I am writing to you regarding Scotland's right to self-determination. You are the third Prime Minister in 4 years that I have written to, since November 2018, asking about a Section 30 order for a Scottish independence referendum.

“Given your predecessors, Theresa May and Boris Johnson, both rejected requests for a Section 30 order, please can you confirm, like your predecessors, that you too rule out a Section 30 for an independence referendum? Of course, if you don’t rule this out, then that is to be welcomed, but I think you should be straight and clarify the matter.”