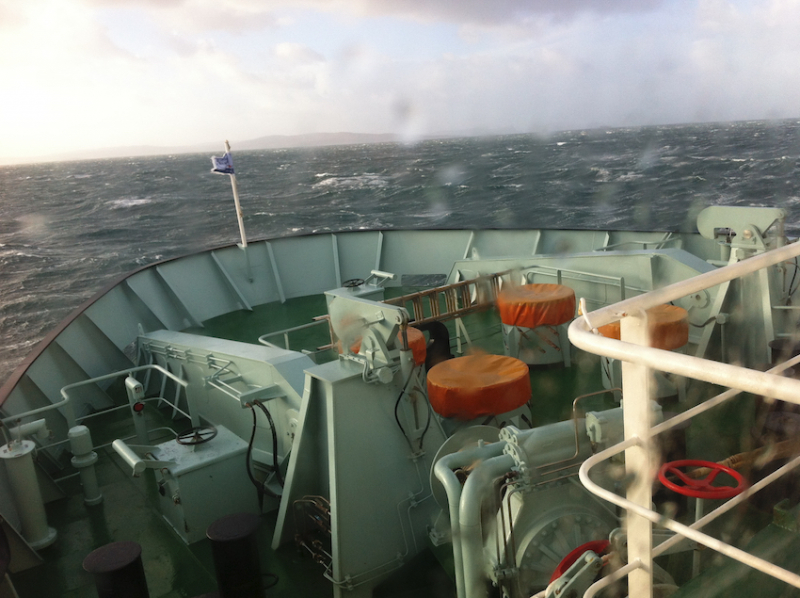 The tug-of-war over the ferry services to Tarbert and Lochmaddy this winter took several new twists late yesterday (Friday August 26).

The MSP welcomed “significant progress” in shortening the period of proposed disruption to ferry services to North Uist and Harris while Uig pier in Skye is being rebuilt to accommodate the new ferry – still called Hull 802 – which is supposedly under construction on the Clyde as it has been for the last five years.

It’s worth noting in passing that had Caledonian Assets Management Ltd simply decided to build new ferries that fitted the port facilities they were designed to serve, none of this work would have been essential just now.

Following a meeting this week between the Minister and local stakeholders including community representatives and the local MSP and MP, an alternative option to the schedule for Uig pier’s essential works and developments, has now been put forward.

Alasdair Allan said: “The original proposal would have seen Uig pier closed for over five months this winter, meaning no ferries at all to Tarbert, Harris and the service from Lochmaddy being diverted far to the north to Ullapool during that long period.

“During the meeting, CalMac also indicated that MV Arrow and MV Pentalina were more likely to be available during both the new proposed outage periods.  If this proves possible, then it would have a significant impact on the resilience of services during those times.

“I welcome this new proposal which will very significantly reduce the number of weeks that Uig pier will be out of action for.

“It is my view that this disruption, while still far from ideal, will be easier for local businesses and passengers to work around. The Minister for Transport has put a lot of work into coming back with these alternative proposals.

The new Transport Minister Jenny Gilruth has hosted regular engagement meetings this summer with local representatives along with CalMac and Highland Council, who are leading the Uig pier replacement project. Earlier Highland Council had only examined the impact of its closure proposals on the Uig area – not the islands served by the ferry route. Unsurprisingly, the impact on Uig was minuscule.

Last night Harris Development Ltd reacted with bitterness to the latest news: “We are extremely angry and disappointed at being excluded from the meeting held yesterday afternoon to discuss options to avert the proposed 6-month closure of Uig and the removal of our lifeline ferry service.

“Having been party to the previous two meetings this month and strongly voiced our concerns with the existing proposal, we were awaiting details of the next meeting to consider options requested by the Minister for Transport.  We found out, through another community representative 20 minutes after the meeting had started, that it was going ahead.

“It is completely unacceptable for the two community groups representing Harris (HDL and HTF [Harris Transport Forum]) not to have been deemed worthy of an invitation to hear the plans that have a huge bearing on our community.

“As the only community that will be left with no ferry during the works in Uig we should have been included in the discussion.  We have been at previous meetings because we had voiced our objections at how our community is being treated.  We are now left feeling that we have been punished for daring to speak up for our community by not being consulted on the latest proposal.

“However, we are led to believe that these came with a risk of closure up to 12 weeks during the main summer season next year.  If that is the case, then we CANNOT accept that huge risk to our already fragile economy.

“At the consultation meeting in April, we were told that delaying the works until next year was not an option but, now we are finding that this is indeed the option being put forward.

“One of the reasons we were given for not considering a floating linkspan [which could maintain the service throughout the works] was the time needed to gain a new dredging license etc.  Well, we now have that delay, so why can this not be part of the new proposal?

“Why are Highland Council and Transport Scotland so against doing anything that will mitigate the huge damage that the closure(s) will have on the communities in the Western Isles.

“We have written to the Minister for Transport expressing our displeasure at being excluded from the meeting and requested full details of the new proposal but have had no reply so far.

“No details have been received of what the proposed ferry sailings will be during the new closure periods.

“Nor do we know if the new proposals will be going out to the affected communities for them to have input. We fear that they will not, and this will be imposed on us, as has been the case for many years in relation to all matters to do with ferries.”