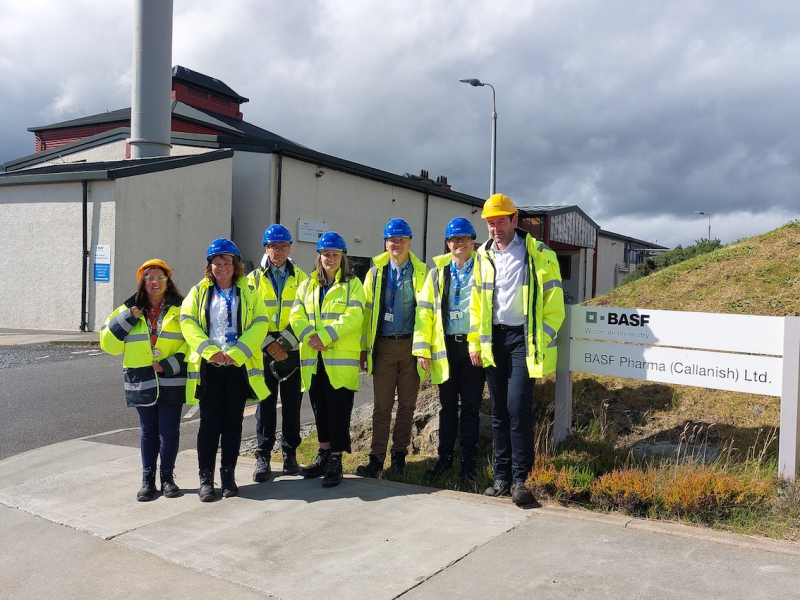 BASF Pharma (Callanish) Ltd is expanding its facility yet again with support from the region’s enterprise agency.

Highlands and Islands Enterprise (HIE) has invested up to £1.8m to create a new warehouse at Breasclete.

Work is underway by Stornoway-based Lewis Builders to build the new 550 sq m facility at the site where BASF Pharma (Callanish) Ltd occupies a factory which is owned by HIE.

The new warehouse will provide much needed storage capacity to support the company’s growth plans.

Around 80 people are currently employed at the factory including a team of skilled experts producing highly purified omega 3s as active pharmaceutical ingredients.

Using patented processing technology and sustainable fish oil supplies, the products are used in pharmaceutical and dietary supplements, most of which are exported around the world.

As the company expands its operations, it is expected to create more jobs over the coming years.

The BASF Pharma (Callanish) Ltd facility has undergone significant transformation since Equateq, a start-up company employing eight people at its inception, was established in Breasclete in 2006. The site had previously been used by Efamol and Scotia Pharmaceuticals having originally been constructed to rejuvenate the local fishing industry under a fish processing project backed by the Highlands and Islands Development Board in the late 1970s.

Since BASF acquired Equateq in 2012, the company has established itself as a global leading manufacturer of a high-quality lipid used in the treatment of cardiovascular diseases.

There is a strong focus on sustainability at the Breasclete site, with ambitions to further reduce its carbon footprint as it looks to transition to net zero CO2 emissions.

Joanna Peteranna, area manager for HIE’s Outer Hebrides team visited BASF this week along with HIE's chief executive, Stuart Black. Joanna said: “We have worked with BASF Pharma (Callanish) Ltd and its predecessor over many years to establish and grow this important business. The company has already achieved a great deal in Lewis, developing a highly successful scientific business providing well paid employment and trading internationally from an island location.

“The new warehouse will provide more storage capacity which will assist in their planned increased production. We’ve supported the company’s growth over several years and we are delighted to have played a key role in enabling this latest investment to strengthen the business further and secure jobs on the west side of Lewis.

"It's great that BASF have an operation on the Isle of Lewis and we are pleased that this in turn gives them the opportunity to contribute to the Island’s economy and communities.”

Angus Morrison, site manager for BASF Pharma (Callanish) Ltd, said: “This is another important milestone in the development and growth of the business on the Isle of Lewis. We are committed to sustainable manufacturing here at BASF Pharma (Callanish) and are grateful to the HIE for their support and investment, enabling us to secure highly skilled and high-quality jobs in our local community.”