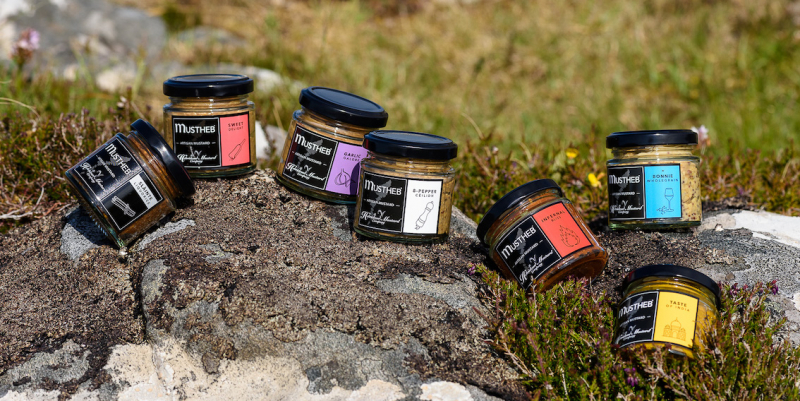 The Isle of Harris has seen a vast national and international expansion for its indigenous business community in recent years.

Harris Tweed Isle of Harris led the way with its Inverness shop; then Essence of Harris spread its retail influence across Scotland; and there's the now ubiquitous Harris Gin bottle and product from the Isle of Harris Distillery, while there's also A S Apothecary in Northton which has an international appeal to its unique product range.

But beside the main road into Leverburgh, there's another recent start-up which has successfully established itself on the market five years after its creation, and feels it's time to pop the bubbly.

When in 2017 Heike Winter, founder of the Hebridean Mustard Company, sold the first jar of mustard produced in the Outer Hebrides, her ambition was to establish a product that would act as an ambassador of good, honest and genuine taste. She had not expected that the mustard would soon become known beyond the borders of the Western Isles.

Today (Saturday August 20), five years later, she can justifiably claim that she has achieved the goal she set herself in 2017. The first variety of mustard has seven siblings now. More are to follow. The artisanal gourmet mustard, made from premium ingredients, is winning over top chefs in high-end restaurants and pleasing palates all over the world.

Even the Mustard Museum in Wisconsin, USA, has given Mustheb space on its shelves.

Heike's passion is to help the versatile paste achieve the status it deserves. She wants to show that mustard is more than just a blob of yellow on a plate, and that it goes with more than just steak and sausages. Good mustard has a personality and, unlike the most soulless industrial pastes found at knockdown prices on supermarket shelves, Mustheb leaves a lasting impression, a good feeling, as her customer response shows.

In March 2022 she set another milestone with the invention of the world's first mustard tasting tent. Weather permitting, mustard lovers can take part in a tasting experience at the roadside.

The fifth birthday is no reason to rest on one's laurels. On the contrary; Heike affirms: "Those who know me know that standing still is not an option. I want to continue to surprise mustard lovers from all over the world."

The aim is happy customers, that's why she is also braving unpleasant issues, like the current problems around sourcing global raw materials and the skyrocketing prices for raw materials.

However, she is confident that Peace, Love & Mustheb will continue to be a must-have of the Hebrides for years to come.