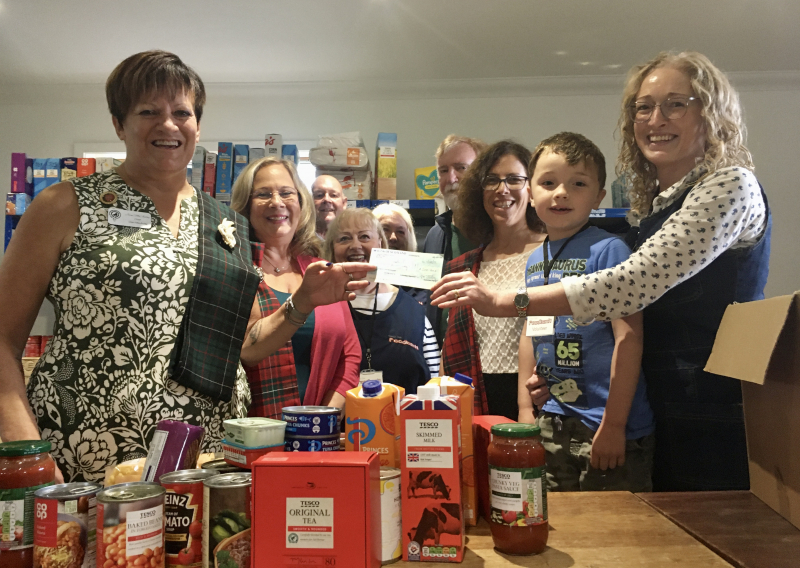 A comparison between food poverty issues in the Western Isles, Canada and the USA engrossed visitors to Stornoway today (Thursday 11 August) as the 2022 gathering of Clan Macaulay got under way.

Macaulays of all spellings from around the world are in the islands for a three-day programme of events celebrating their heritage and roots, but also looking at present-day issues in the country their ancestors left.

The gathering began today with a civic reception at Comhairle nan Eilean Siar and the presentation of a donation to the Eilean Siar Foodbank, where the topic of food poverty was robustly discussed.

Eilean Siar Foodbank co-ordinator Sandra Macleod and volunteers Margaret Maclellan, Marion Macleod and Jessie Murray explained to representatives of the clan how food boxes are assembled, filled and delivered to families in need in the islands.

In return they learnt how the need for food support is being greatly felt in communities around Canada and the USA, as well as here in Scotland.

Clan chief Joan McAulay, whose family emigrated from the Uig district of Lewis, via Quebec to Saskatchewan in Canada, said that her repeated visits home to the islands never failed to make her emotional.

She said: “It means a lot to come back to the Western Isles, because there are so many Macaulays here and everybody is so welcoming. There’s a spirit here that’s second to none, like nowhere else, even elsewhere in Scotland.”

Mary Jane McCauley Meischeid is visiting Lewis for the first time from her home in the USA. She said: “My family originate from County Donegal in Ireland and this is my first year on the planning committee. It’s been fun meeting everybody in the group, even before getting here.”

Sadly, some of those who had intended to travel when the gathering was first scheduled in 2021 were unable to do so. First the gathering itself was postponed due to the pandemic and this year there was still reluctance to travel.

Even when the reduced group did make the trip across the Atlantic, some were delayed by lost baggage in Edinburgh and a couple went down with Covid in the Scottish capital and have travelled no further.

For those who have made it here, there’s a full agenda of touring planned tomorrow, with coaches booked to take the clan around historic sites connected with the Macaulays, such as Clach an Trushal, the standing stone reputed to mark the last great battle between the Morrisons of Ness and the Macaulays of Uig.

Serious business like the annual general meeting and a workshop session on genealogy will be interspersed with social activity including a formal meal, bingo, the Macaulay heavy(ish) games on Saturday and a ceilidh, all centred around the Caladh Hotel, which is hosting the gathering.

The Macaulay clan will disperse on Sunday after dancing until midnight at a final ceilidh on Saturday night. A collection taken throughout the gathering will raise money for Eilean Siar Foodbank.