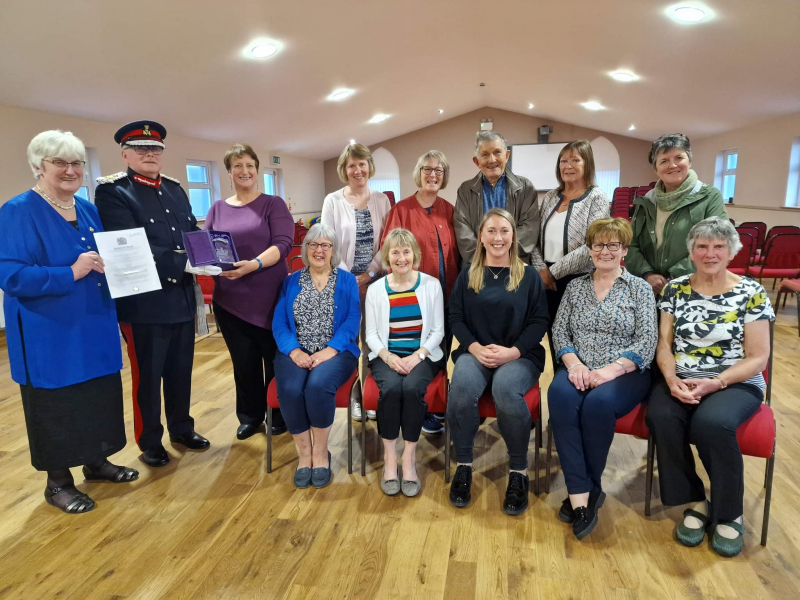 Smiles all round for Loch a Tuath News

The volunteers of Loch a Tuath News (LATN) were smiling from ear to ear last night (Tuesday 9 August) as they finally took delivery of their Queen's Award for Voluntary Service.

Lord Lieutenant of the Western Isles Iain Macaulay and Deputy Lord Lieutenant Annie Macsween visited the volunteer team to present them with a crystal award and a certificate signed by Her Majesty the Queen.

The Queen’s Award for Voluntary Service is the highest award given to local volunteer groups, and was this year awarded to 22 organisations across Scotland – 244 in the UK  – in recognition of their outstanding community service.

The award to the community newspaper, which was announced on 2 June as part of the Queen’s Platinum Jubilee celebrations, honoured what they described at the time as: “Recording that which becomes history, fostering community spirit and tackling social isolation.”

Jayne MacArthur, editor of the magazine, said then: ‘We are over the moon to receive the QAVS award. It is recognition of the hard work that has been put into the magazine by every single one of our volunteers, past and present.

“To receive this award in the same year we were named Highlands and Islands community newspaper of the year is quite overwhelming, but it is great for all those who are involved both now and who have been involved in the past to receive recognition for the hours they put in to produce a great quality publication enjoyed by many.

“In the early days of the pandemic, in particular, we went to great lengths to ensure the magazine was published, sometimes having to deliver copies by hand as many of our volunteers had to shield.

“Many living alone in our community valued the dependability of their copy. Collaborating with other local groups, such as the community council, enabled outreach into the community, identifying those who might be lonely and needing assistance.

“People who were unable to be contacted physically benefited from connectedness and retained a sense of being part of the community. The LATN is a fixture in many readers’ houses and has been a beacon of stability and contact for those isolated and anxious, and we will continue to do our best to serve our readers.”

The award was officially delivered by Her Majesty’s representatives in the Western Isles last night, after which the volunteer team said: “As you can see by the smiles, we are delighted to be recipients of this award, which is for the lifetime of the magazine, past, present and future.”

Two volunteers from LATN will attend a garden party at Holyrood in July 2023, along with other recipients of this year’s award.

Picture from Loch a Tuath News.