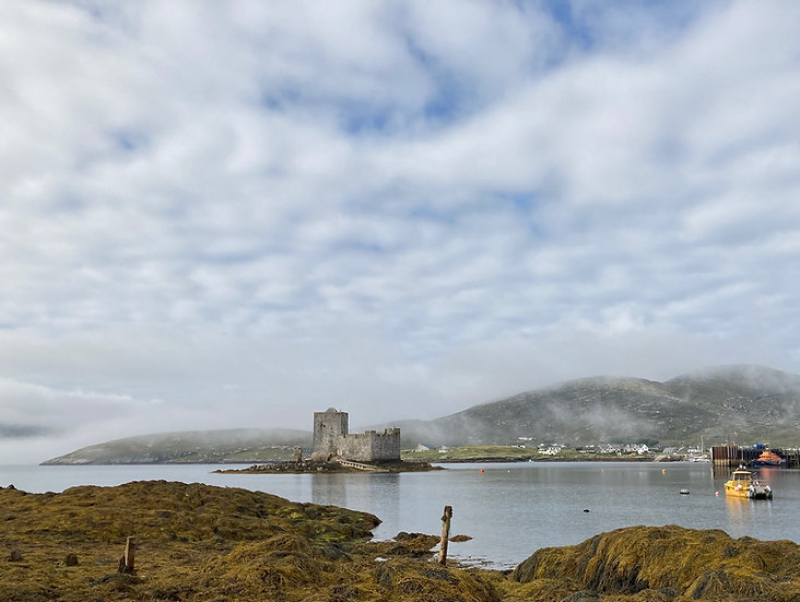 Macneils from all over the world gained an insight into works on Kisimul Castle yesterday (Monday 8 August) during their clan gathering in Barra.

Historic Environment Scotland representatives joined Rory Macneil of Barra, chief of the Clan Macneil, to update those attending the gathering, as well as local residents, about work in progress at the castle, which is currently closed for restoration.

Clan MacNeil had previously spoken of their ‘sadness’ at news that the castle was to remain closed during their 2022 Clan Gathering.

In May this year Na h–Eileanan an Iar MP Angus Brendan MacNeil said that residents of the Isle of Barra feel let down and angry about the continued closure of Kisimul Castle, which they felt was being poorly stewarded by Historic Environment Scotland.

He said that that HES was ‘not living up to their promises’ over the iconic castle in the bay and called for HES chief executive Alex Paterson to visit Barra to meet the community face-to-face and explain why, in HES’s custody, Kisimul Castle has remained closed for so long.

Sian is the islands and world heritage visitor services manager for HES, and her role includes supporting site teams at staffed properties in Orkney, Shetland and the Western Isles.

A spokesperson for Historic Environment Scotland (HES) said: "We are continuing to proactively engage with the clan chief and the community, and as part of this, offered to speak about recent conservation, stakeholder and tourism activity during the gathering.

“This included an update on recent conservation works including re-roofing parts of the site and installing a new underwater power supply, as well as talks on the history of the site, and providing updated interpretation in Castlebay.

"In terms of longer-term plans, we know how keen people are to access the wider interiors of the site, however we have a statutory duty to keep staff and visitors safe from potential risks and the specific conservation challenges affecting the wider site are complex.

“Our chief executive and members of the team met recently with the clan chief and other representatives, and we intend to meet again next month to discuss future plans."