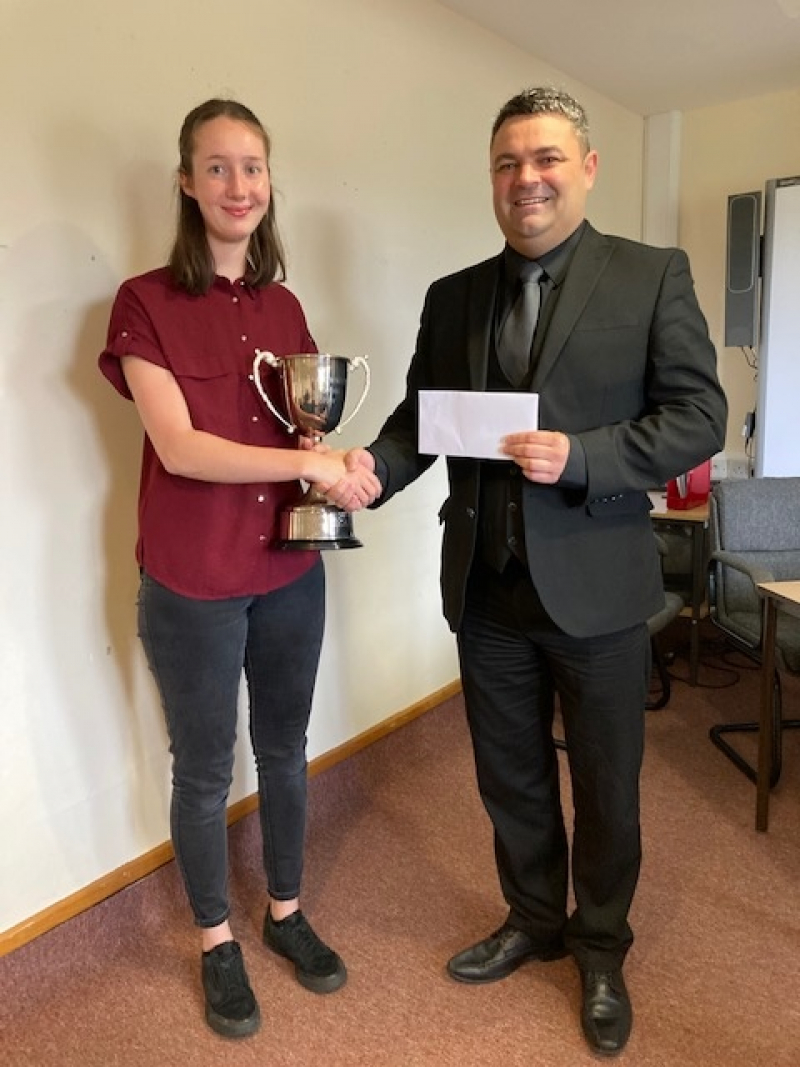 The Donald Stewart Memorial Trust is pleased to be back with its annual awards after a pandemic-induced absence, and delighted to announce the winners of its two prestigious 2022 awards.

This year's awards have gone to Sgoil Lionacleit and The Nicolson Institute, with Mairi MacIain, a 6th year pupil in Sgoil Lionacleit, winning the Award for Outstanding Achievement and Luke Macleod, a 6th year pupil in The Nicolson Institute, winning the Award for Significant Contribution to Gaelic Development.

After considering all the nominations received for this year's Award for Outstanding Achievement, Trustees unanimously agreed that the Award would go to Mairi MacIain.

Mairi, the Trustees said, was a highly motivated and committed individual who has worked tirelessly to gain excellent academic qualifications during her time in Sgoil Lionacleit and this is backed up with her wonderful achievement in getting 5 A's in an academic year which was subject to huge disruption and uncertainty. Mairi has also completed the course work for Advanced Highers in Maths and Physics.

But what most impressed the Trustees was Mairi's achievement in gaining a nationally recognised CREST award for student-led project work in the STEM subjects. Mairi worked with a local research scientist in North Uist to gain experience in using data in real world applications and this was a significant part of her CREST award.

Mairi's drive, commitment, motivation, inspiration and selflessness have been a wonderful example to younger students and her peers, and her effect on them cannot be overstated.

Gordon Young, Headteacher at Sgoil Lionacleit said, "We are delighted that Mairi has won this prestigious Award - it is well deserved. Mairi is personable and enthusiastic about everything she does and has been a model student during her time at Sgoil Lionacleit. Her academic qualifications speak for themselves and Mairi is a fluent Gaelic speaker who will go on to become a real ambassador for Gaelic Medium Education. I speak for all at Sgoil Lionacleit in saying that we wish her well as she moves on to the next stage of her academic journey."

The Award for Outstanding Achievement was presented to Mairi by Comhairle Leader Cllr Paul Steele. Presenting the award to Mairi, Mr Steele said: "Congratulations to Mairi in her outstanding accomplishment in winning this year's Award for Outstanding Achievement. She has set a fine example to others around her and, indeed, is an inspiration to us all. It is particularly impressive that this was achieved against a back of disruption and uncertainty during COVID. I wish Mairi well in everything that she does in future." 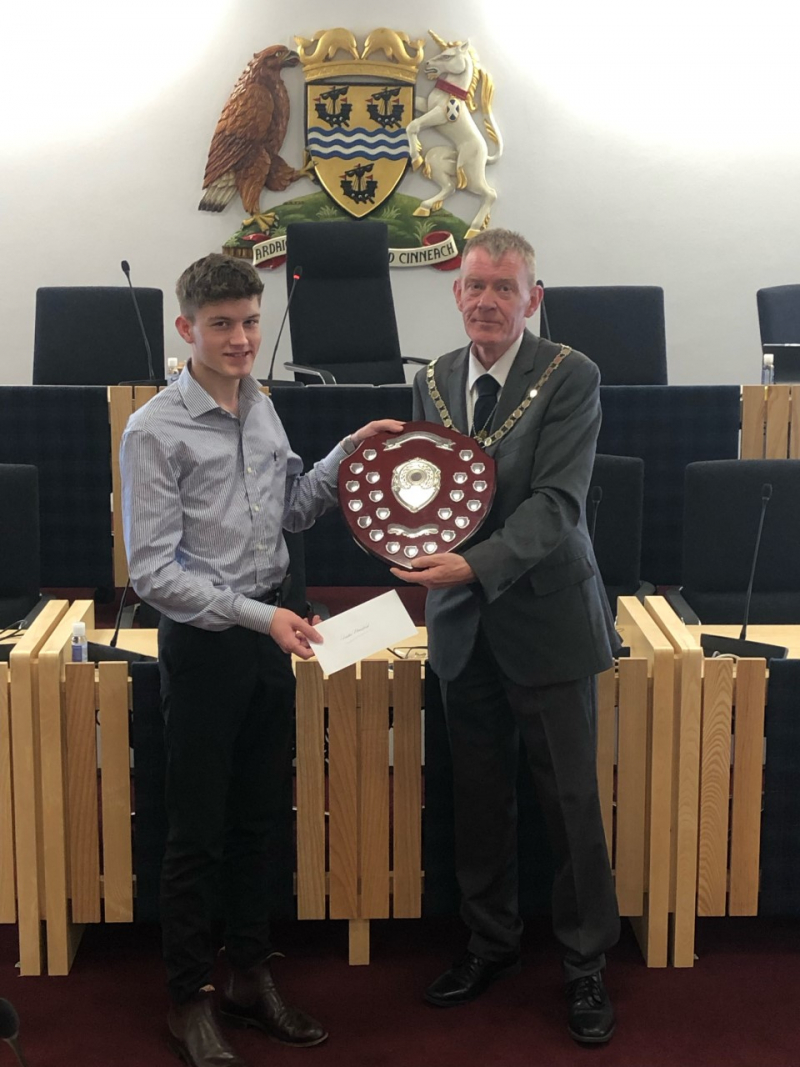 In selecting Luke as winner of the Award for Significant Contribution to Gaelic Development, the Trustees, who select the winners of both awards, were delighted to learn that Luke had been an excellent ambassador for Gaelic both within the school and also in the wider community. They were delighted to learn of his participation in the Mods, Deasbad Gàidhlig Nàiseanta nan Àrd-sgoiltean and Café Beartais. They also enjoyed learning of his work in producing a P7/S1 transition video for pupils and parents and also a Gaelic video for the Leanne Fund and FilmG. The Trustees stated that all these events raise the profile of the Gaelic language at local, national and indeed international levels and that Luke was to be commended for taking part in them.

Trustees were again extremely happy to learn of Luke's leadership qualities and skills in supporting others in school by working weekly with the GME class, helping with Seachdain na Gàidhlig activities, and also by participating in the Bòrd na Gàidhlig focus group considering the draft National Gaelic Plan consultation.

Fiona Cunningham, from The Nicolson Institute said, "Luke has been educated through GME for his entire school education. It was evident form his early days as a pupil within The Nicolson Institute that he was very competent in speaking, reading and writing Gaelic. At every opportunity Luke used his Gaelic in a productive manner, involving himself in events and initiatives within and outwith his school. Coming from a home where Gaelic is not the first language this is a notable achievement and his positive attitude towards the Gaelic language has made him an excellent role model."

The award for Significant Contribution to Gaelic Development was presented to Luke by Comhairle Convener Cllr Kenny Macleod.  Mr Macleod said: "Congratulations to Luke on this magnificent achievement. I am very impressed with him, his fluency in Gaelic and indeed his confidence, all of which was evident after hearing his speech in Gaelic at The Nicolson Institute prize giving ceremony a month ago. I am always impressed by someone who has such a high level of fluency in Gaelic when it wasn't the first language of the home and it just goes to show what can be achieved with the right application and work ethic. Perhaps Luke will be a future Convener of the Comhairle!"

Margaret Martin, Chair of the Donald Memorial Trust said, "We were highly impressed with the overall quality of this year's submissions in the two competitions. On behalf of the Trust I congratulate Mairi and Luke on winning their respective awards and wish them both well in all they do in the future. It is evident that we have a wealth of talented young people in the Western Isles. I wish to thank the schools for their continuing support for the Donald Stewart Memorial competition, without whom the competition would not exist, and especially this year following all the disruption the schools have suffered over the past couple of years. It is interesting to note that Mairi is the granddaughter of Donnie Johnson, one of the original founders of the Donald Stewart Memorial Trust. We are delighted Donnie was able to attend the presentation to Mairi."