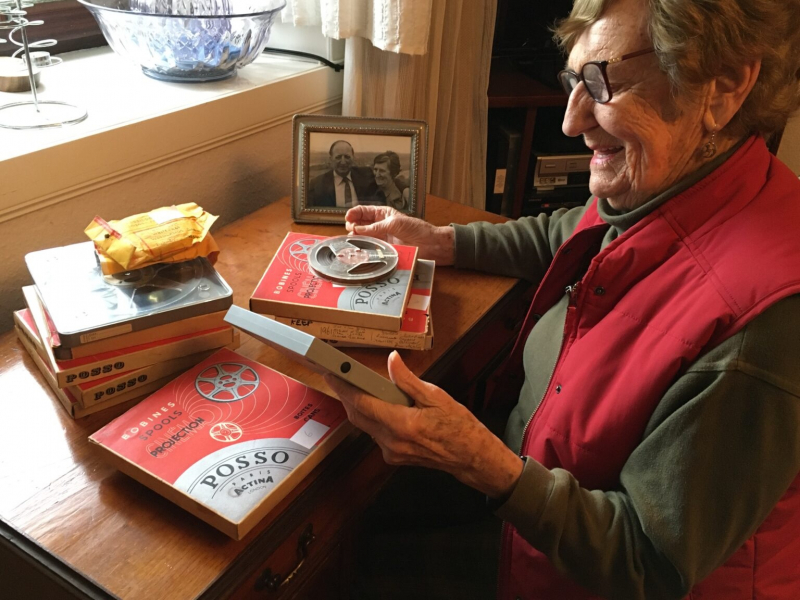 Reeling in the past with Isle film

Tickets for the Berneray premiere of DÙTHCHAS | HOME - a documentary based on home movie footage from the Sixties and Seventies - are now available.

The tickets for the August 18 showing in Berneray Community Hall are free, but donations will go to the Berneray Hall renovation fund.

One avid member of the audience will be Gloria Mackillop, the widow of the late Donald "Splash" Mackillop, as the documentary features footage from their 1968 wedding day that Gloria hadn't seen before until recently.

It's taken 50 years, but the retired nurse will finally relive her wedding day on the big screen. Gloria, 91, originally from Australia, was believed to be the first non-Gaelic speaker to live permanently on Berneray.

The archive film collection recording life on Berneray half a century ago lay forgotten. The footage shot by friends was gifted to the Mackillops. But it wasn't until after Gloria's husband died that she decided to find out what the reels contained.

Kirsty says:  “This precious footage from Berneray provided us with the perfect opportunity to explore how cultural and linguistic loss has affected one tiny island. A similar story can be seen throughout the Hebrides over the last century, but it’s important to balance this with the profound sense of community and deep belonging that still runs strong. It’s a special thing to have the story of Berneray told by the islanders (and descendants) themselves, and it’s been a real privilege to get to know them better in the process.”

Kirsty MacDonald has more than 20 years of experience in the Gaelic language and cultural sector. A native of North Uist, she is fluent in Scottish Gaelic and has a love of indigenous minority cultures and languages, history and ethnology. As well as researching and presenting the archaeology series ‘Talamh Tròcair’, she has contributed to several broadcast productions for BBC Alba such as An Dotair Mòr (2014), An Cràdh / Endo What? (2015), An Taistealaiche / The Far Traveller (2019), Iorram / Boat Song (2019) and Maorach: Hebridean Shellfish (2021). Dùthchas | Home is her first co-director role.

Andy says: “When the FAODAIL | FOUND archive film project were given this archive film collection, as Donald says in the film, we didn’t know what was on it other than what was written on the reel boxes – Berneray 1960-78. Thanks to very generous crowdfunders we had the collection digitised to 4K and were amazed at the fantastic scenes the reels held. One iconic scene was repeated every time the filmmakers, Bill & Ann Scott, left the island – friends and family waving from the pier as the boat slowly pulls away. I knew we had a film to make.”

Andy has worked in creative and collaborative film and contemporary art since the late 80s. He was director/cinematographer/producer of the Scottish BAFTA nominated £300,000 budget feature documentary TRANSITION, the first Scottish documentary to make the official selection at IDFA in 2000. In 2000 he worked with Taigh Chearsabhagh Museum & Arts Centre to make the participatory documentary feature Passing Places – The Real Outer Hebrides. He is passionate about environmental issues and the islands where he now lives.

The soundtrack is by Gaelic musician Donald Shaw, a founder member of the traditional music group,  Capercaillie.

The Edinburgh International Film Festival has shortlisted the documentary for an award.