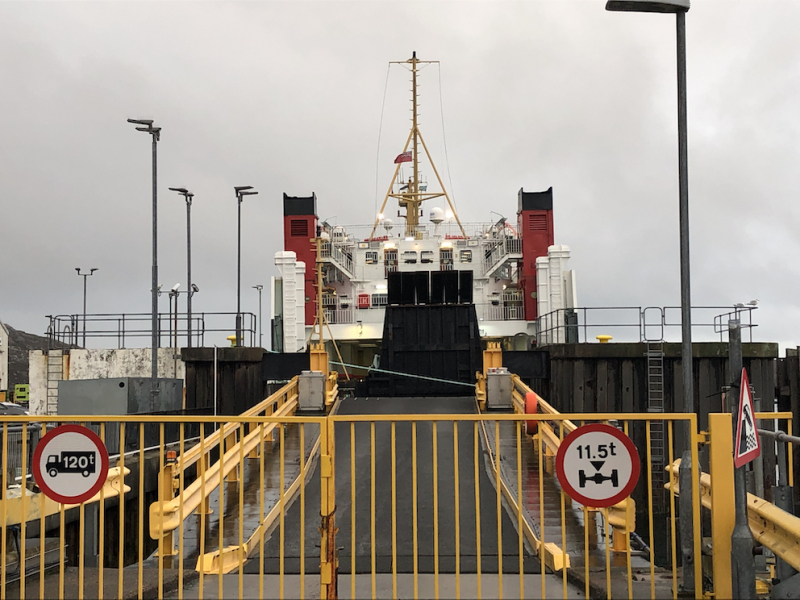 According to reports today (Sunday July 31) in the Herald newspaper, CalMac Ferries Ltd have recently been hit with £3.5m in fines from Transport Scotland for the service failings of their ageing ferry fleet.

This exceeds the £3.3m pre-tax profit that CalMac recorded in the year to March 2021.

How this makes sense given that state-controlled CalMac Ferries can only work with the ferries provided to them by the Scottish Government and its company Caledonian Maritime Assets Ltd (CMAL) is not being explained.

Now a group of South Uist businesses are calling for the penalties to be put in a pot to compensate those who lose money from disruption to the ferry services.

The Lochboisdale Ferry Business Impact Group was formed in the wake of a two-week disruption to the South Uist service in May, caused by the removal of MV Lord of the Isles for repair work to her firefighting system which was preceded by a three-month period which saw the almost complete removal of the service.

A study for the group said the major disruption resulted in financial and economic losses estimated around £648,000.

The Lochboisdale Ferry Business Impact Group survey, which was sent to 395 businesses across Uist & Barra, ranging in industries from accommodation, food producers, IT, retail and more, showed 91% of the businesses were affected by the period of cancelled sailings.

The assessment shows that for each day of cancelled sailings, Uist suffers a loss equivalent to almost 2.5x full year’s average salary on Uist (£46,285 a day).

The group also looked into the other services across the CalMac fleet and found that not only is the Lochboisdale sailing disproportionately removed, the timetabled sailings show that in terms of population South Uist has an inadequate number of weekly sailings to start with.  South Uist, Eriskay and Benbecula have a population of 3,200 and only 10 sailings a week, compared to Mull which has a population of 2,667 and 209 sailings across its multiple routes.

The group have requested the following:

The following are comments from the group in relation to the results of the survey:

“No ferry means no income, no jobs, no people”

“Uist is speedily advancing in many industries such as renewables, heritage, food and drink production with two new distilleries being built and even a Space Port in the plans. Uist is not held back by lack of ambition or capability, but by Calmac, CMAL, and Scottish Government treating our lifeline connection as expendable”

“Uist is home to a strong Gaelic Culture, without a strong direct lifeline to the mainland that culture will quickly dilute and eventually evaporate with islanders forced to move their businesses and families to the mainland. It’s akin to a modern-day Clearances”

The Lochboisdale Ferry Business Impact Group says it will continue to push for the service that South Uist deserves to protect its businesses, economy, communities and culture.

John Daniel Peteranna, whose Daliburgh-based renewable energy company supplies wind turbines: "If there is no train, due to a strike, there is always another option, get the bus, get a lift, use your car. But if there is no ferry you just cannot get there. This is not understood on the mainland. Yes, there are other ferries from other islands, but they do not connect with each other.

"The ferry operator is fined for missing sailings. But this money goes back to the Scottish Government. We want the Scottish Government to put those fines in a fund that the island business affected and who have sustained losses due to cancelled ferries, on whatever route, would be able to apply for compensation as they are the actual people affected and are losing money with every cancellation."