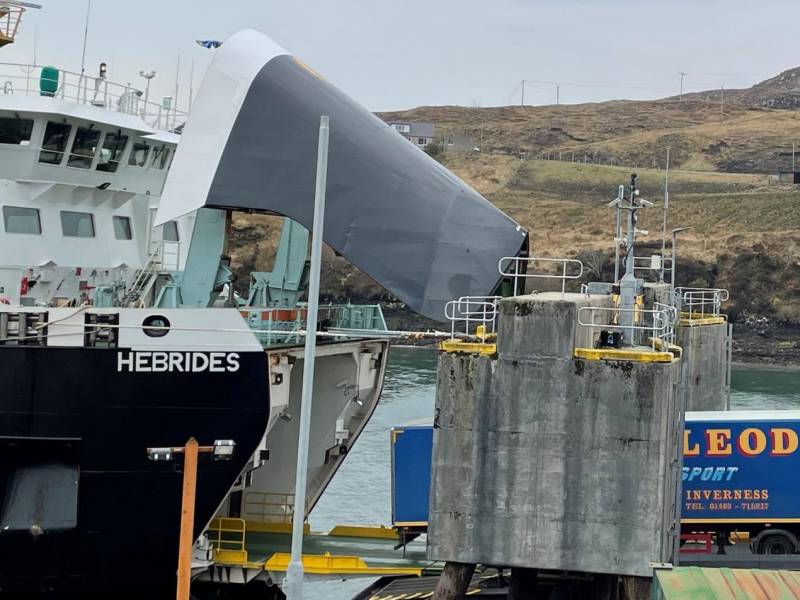 As some of the dust and waves of the most recent CalMac ferries crisis begin to settle, the bleak prospect of having no ferry service at all from Uig on Skye to Tarbert in Harris for month after month from later this year, becomes more grim by the day.

Kenny MacLeod, who chairs Harris Development Ltd, has written to MSP Alasdair Allan in yet another attempt to make officials and government ministers understand the seriousness of the closure of the ferry link for people in Harris.

They will have their multi-million new terminal in Tarbert standing unused for at least 24 weeks while pier replacement is undertaken at Uig - a port owned by Inverness-based Highland Council who have no requirement to consider the wellbeing of the Isle of Harris.  It's worth pointing out that of the works involved in the Uig Ferry triangle, the ferries are five years late and the work on Lochmaddy terminal is more than a year behind the original schedule so even 24 weeks is not necessarily the length of the closure.

Kenny MacLeod tells the MSP: "Thank you for sharing with us your letter to the Transport Minister [Jenny Gilruth] of 31 May regarding the proposed closure of Uig ferry terminal during the forthcoming development works (the whole harbour is not closing – fishing vessels will still be able to operate from there as will CalMac’s suggested passenger service).

"Unfortunately, your letter does not in any way reflect the actual demands of the Harris and Uist communities who are going to be so seriously impacted by the proposal.  We are looking for the terminal to remain open during the works and the ferry to continue to serve Lochmaddy and Tarbert as it normally does.

"This is our lifeline service but you and the Government are willing to take that away without any real thought for the consequences for the people living on Harris and Uist.

"The only reason that there is a proposal to close the terminal for 24 weeks is because neither Transport Scotland, the Scottish Government nor Highland Council cared enough about the people of Harris and Uist, to have a requirement for it to remain operational throughout, built into the tender and final contract.  You care more for ensuring the contractor has an easier job than for keeping our lifeline service going.

"We know, from our recent meeting with [Calmac Managing Director] Robbie Drummond, that the option of having a floating linkspan was looked at but, for some reason unbeknown to him, this was rejected.  We know that this was not due to a lack of available linkspans and so can only be down to a financial consideration.

"We are beyond anxious and are, in fact, in great fear for the existence of our community due to the current proposal.

Businesses are already looking at plans for closing down because they cannot continue to trade as a result of the planned 24-week minimum closure.

The same is true for Uist which is looking at a 2/3rds reduction in its freight capacity."

"Your letter only picks on some of the questions that were raised at the most recent of the consultations which were fronted by CalMac (who are powerless to act on any of the suggestions made to them).  The consultations should have been run by Transport Scotland and the Scottish Government, who are ultimately responsible and have the power to implement suggestions, but they clearly chose not to face the communities that their decisions are having such a devastating impact on.

"One of the more important questions that was asked and could not be answered by those present was why the contract did not include keeping the terminal operation as a requirement.  That is by far the fundamental question and one that we would hope you would be loudly knocking at the doors of Transport Scotland and the Transport Minister for an answer.

"In the third paragraph you refer to the anxiety that is being caused in Harris.  We are beyond anxious and are in fact in great fear for the existence of our community due to the current proposal.  Businesses are already looking at plans for closing down because they cannot continue to trade as a result of the planned 24-week minimum closure.  The same is true for Uist which is looking at a 2/3rds reduction in its freight capacity.

"The Scottish Government invested £millions in the Ferguson shipyard to safeguard 300 or so jobs in Inverclyde.  We would expect our MSP to be very loudly demanding that similar money be invested in protecting not only jobs but whole communities in our islands from the devastating effects of the proposed closure of Uig ferry terminal.

"You make no mention in your letter of the other, equally devastating, decision that has impacted on the Tarbert and Lochmaddy service this summer.  The limitation on the use of the mezzanine deck on the MV Hebrides (and which was suggested by yourself) has caused a significant number of cancellations and lost revenue for businesses seeking to recover from the severe impacts of Covid.

"This is again another area where the needs of your constituents have been completely overlooked by you.  The Government are refusing to pay £816,000 to protect at least £3.5m of income for the Harris economy."

In conclusion, Kenny MacLeod says: "We would ask that you seek an immediate reversal of the decision to limit the use of the mezzanine deck on the MV Hebrides so that even at this stage of the season we can salvage something from the ruins of your input.

"Further we would ask that you urgently speak to both the Transport Minister and Transport Scotland and ask that the option of using a floating linkspan be revisited and arrangements made for this to be in place to ensure the very existence of the Harris and Uist communities continues beyond the end of this summer.

"You have been elected by the people of the Western Isles to represent them in the Scottish Parliament.  We would ask that you put the needs of your constituents ahead of any thoughts of protecting the Government from any criticism for decisions that so clearly and negatively impact on our fragile communities."