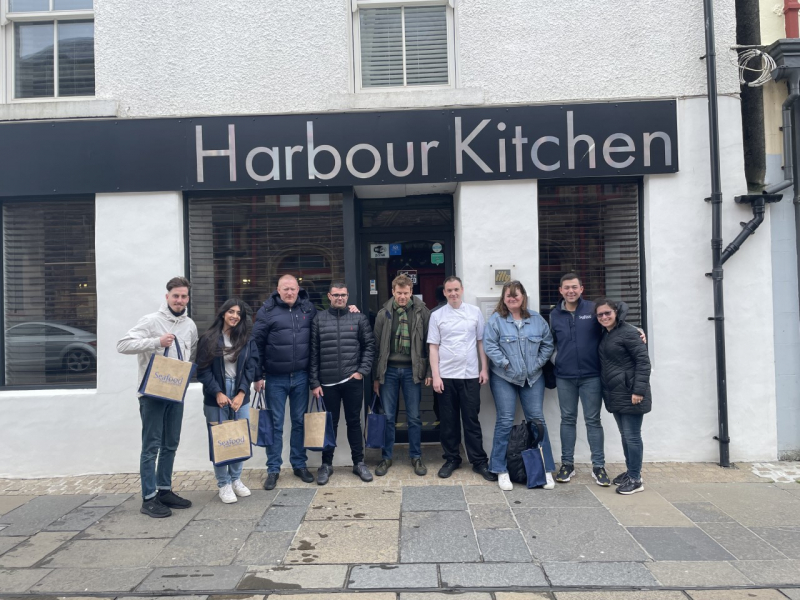 Whilst he is well used to cooking solo, the pressure was on as the guests in front of house were the biggest collection of culinary star acts Harbour Kitchen ever has hosted.

"To say I was a little apprehensive was an understatement, though, in these moments, you need to switch off the nerves and just cook to the best of your ability. I treated them like any other guest; going too far with menu choices or ingredients would not reflect what we do at Harbour Kitchen.” confessed Lach.

He went on: "I have always wanted to use local produce and showcase them in a way that doesn't disguise them. We are fortunate to have some of the world's best seafood on our doorstep, so projecting dishes that show off our products speak for themselves."

As a result of Lach’s hard work, the lunch proved a huge success, and he was subsequently inundated with questions from the group about the restaurant.

Lach remarked: "The lunch went really well and was loved by all, including Tom Aikens and Andrew Sawyer, who congratulated me on hosting a lunch which consisted of a six-course tasting menu with a wine pairing. The feedback was amazing; great and honest feedback on the food from high profile chefs was incredible."

The extraordinary lunch table was a spin-off from a Seafood Scotland study tour that Harbour Kitchen participated in during March, and the Stornoway eatery is now an established finale for these tours. After visiting various seafood suppliers throughout the Western Isles, the tours wind up with a leaving lunch at Harbour Kitchen featuring the local produce they have been introduced to on the tour.

"We have since once again secured more contacts thanks to Seafood Scotland. So who knows who could pop in the door next time?" says Lach.