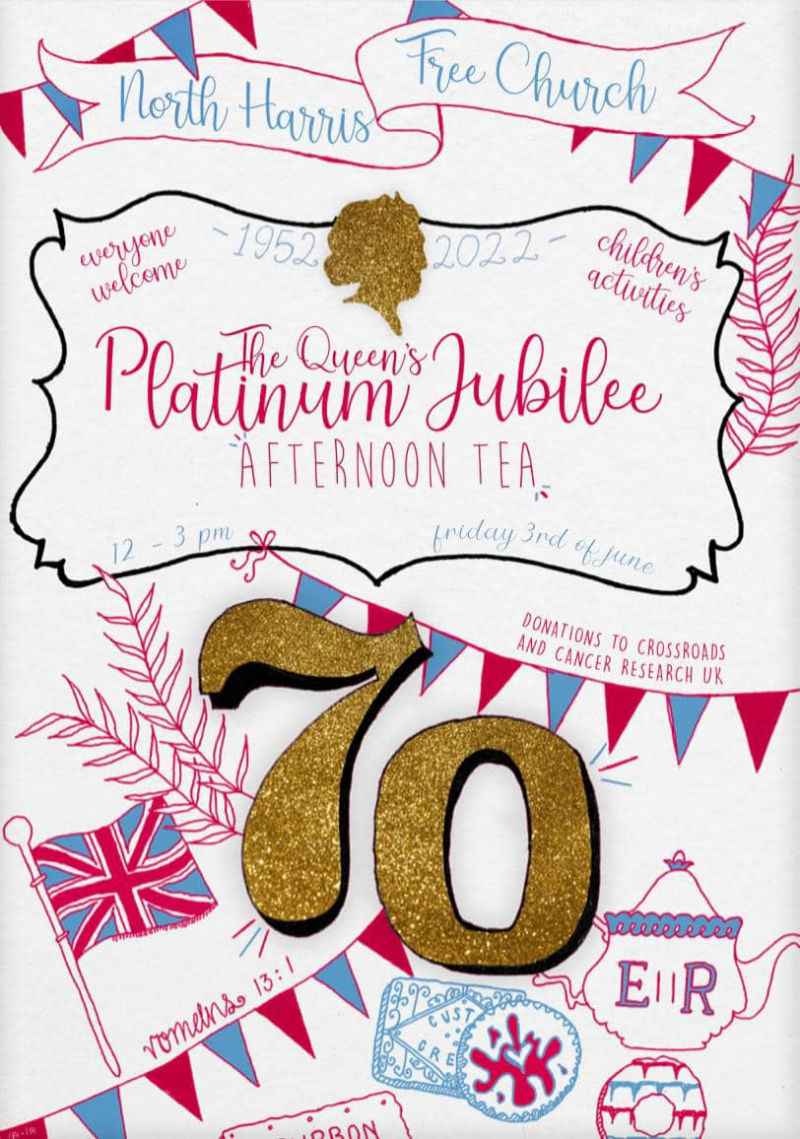 With just eight days to go until the extended bank holiday planned for the Platinum Jubilee of Her Majesty Queen Elizabeth II, celebration plans in the islands are slowly building to create a varied and widespread programme.

The isles themselves will be represented at the national celebration in London on Friday 3 June, when Lord Lieutenant Iain Macaulay and his wife Anne represent the Western Isles at a service of thanksgiving at St Paul’s Cathedral.

Last week the Lord Lieutenant issued a plea to anyone organising events to get them registered on the Platinum Jubilee website at https://platinumjubilee.gov.uk/events/ (see the full story here https://www.welovestornoway.com/index.php/articles-auto-3/24435-sign-up-your-jubilee-events-plea).

Four events are so far listed on that site throughout the Western Isles, though many more have been notified directly to the Lord Lieutenant’s office since the appeal.

Those listed on the website include a Tipsy Tea Party organised by Cancer Research UK (Isle of Lewis Committee) on Saturday 4 June in Stornoway Town Hall from 1pm-4pm, with live music.

Also in Stornoway, at St Columba’s Old Parish Church on Saturday 4 June, the Boys’ Brigade and Girls’ Brigade will help host an afternoon tea, while on Sunday morning at 11am the Lord Lieutenant will attend a Thanksgiving Service with invited guests.

Ness has its own celebrations, with Comunn Eachdraidh Nis exhibiting royal memorabilia from 30 May to 9 June and an event on Friday 3 June, when Lewis and Harris Youth Pipe Band will play and there will be royal-themed cakes and decorations in the café.

On the same day at Eoropie Dunes playpark there’s to be an afternoon of jubilee fun with a tea party, treasure hunt and crafts, children encouraged to dress up for the party.

Elsewhere events are planned in Scalpay, Tarbert, the Bays of Harris, Breasclete, Carloway, Benbecula and in Barra.

Breasclete Community Centre is to host a garden party between 12 and 4pm on Saturday 4 June. In Point a Tipsy Tea Party planned by Sheshader Amenities Association for Friday 3 June has been cancelled due to poor ticket sales.

A jubilee bonfire and Dannsa Rathaid are planned by Scalpay Community Association, with entertainment from dancers and musicians, on Saturday 4 June and tea and cakes for everyone.

There are also to be jubilee bonfires hosted by Comann Eachdraidh Chàrlabhaigh on Beinn Ìomhair, by Breasclete Community Centre on Beinn Bhig and in Barra. Also in Barra, Garadh a Bagh a Tuath is to hold a garden party on Thursday 2 June.

Some events are taking place before or after the weekend itself, such as tree planting on Carloway Estate in October and the 300 trees which were planted at the Clan MacQuarrie centre in March.

Events like the planned bonfires are part of a nationwide celebration which will see beacons being lit the length of the UK on Thursday 2 June to initiate the jubilee weekend.

Lord Lieutenant Iain Macaulay said: “It’s good that we are beginning to get details of events across our island and communities, and it’s important that those still planning to put on events get them advertised so that we know the number and range of events planned to celebrate the Platinum Jubilee weekend.

“The Jubilee flag will be flying at all council offices and at Perceval Square, where at 9.15pm on Thursday 2 June the Lewis and Harris Youth Pipe Band will play the Jubilee composition Diu Regnare, a 6/8 march written by Stuart Liddell, pipe major of the world champion Inverary and District Pipe Band.

“That event will be co-ordinated across the UK, as will the lighting of the beacons at 9.45pm. It’s certainly very encouraging that people are beginning to get their events notified by registering them on the Platinum Jubilee website as well as by local publicity.”

Pictures show Lewis and Harris Youth Pipe Band on parade in 2021 and the glamorous invitation for a Jubilee event in Tarbert.