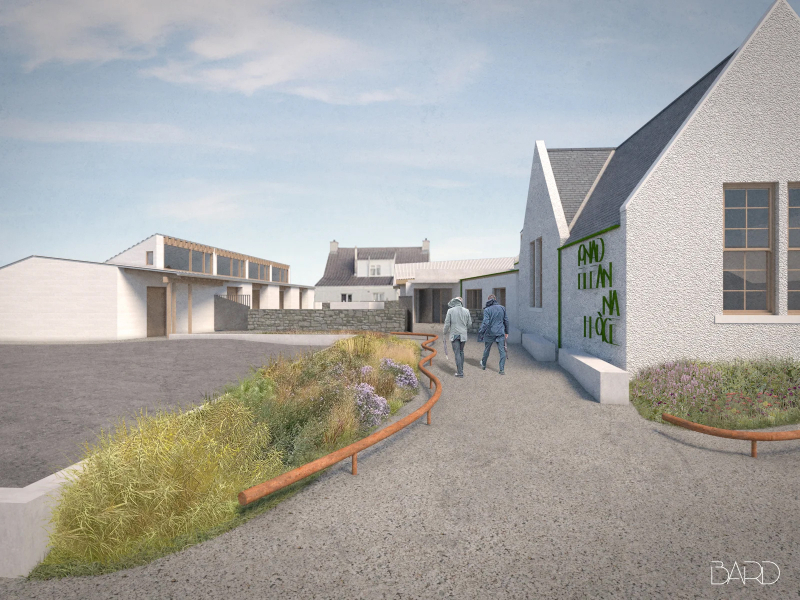 The crowdfunding buy-a-slate campaign to reroof the former Eriskay School is now well over halfway to its £2,500 target.

The reslating of the original main building, due to be transformed into a community hub, will require 8000 slates.

But for £10, Comann Eachdraidh Eirisgeidh is offering people globally the chance to purchase a slate in the name of a person of their choosing.

The fund-raising campaign at crowdfunder.co.uk/p/buy-a-slate---eriskay-school-redevelopment is just one of the avenues being explored to help make the former school a new pivotal point for the community.

In April (2022), the vision for repurposing the school took a big step forward with the submission of an application for planning consent to convert the main building into a multi-purpose community facility.

Since its opening 127 years ago, Eriskay School has played a historic and significant role in the community life of the island.  However, the building has deteriorated in more recent years since the school closure. It is now in need of rescue if it is to be recast once again as Eriskay’s focal point. After almost a decade of disuse, it has proved too late for the extensions, and funding was secured for their demolition.

The aim now is to save the original 1895 building and turn it into a community asset to benefit islanders and visitors alike.In addition to being a base for the historical society, the transformed community hub will also be a base for Comann Each nan Eilean – The Eriskay Pony Society to promote and educate about this rare and unique breed of native pony.

Meanwhile, the crowdfunding campaign is billed as an opportunity for the public and the Eriskay diaspora to support the project and leave a tangible reminder. For each slate purchased, you can email the message you would like to add to the Eriskay School Redevelopment Book of Sponsors. These messages will be compiled and put on permanent display in the new building’s Archive Room.

If you donate £20 for a slate, you or the campaign organisers will write a short message on the reverse slide of the slate before it is placed on the school roof.

As well as individuals, it is also open to companies to sponsor slates, an entire row, or even a section of the roof. Companies that sponsor five or more slates will be name-checked in social media posts and thanked in newsletters.

The former Eriskay School closed its doors in 2013, with Eriskay pupils transferring to the new Daliburgh School.

The crowdfunding page organisers comment: “The old Eriskay school provides the perfect base for our historical society to preserve our heritage and culture and gives us the opportunity to rescue this historic, significant building for the community.”

It is also anticipated that the transformation will create much-needed employment, a social hub, and a space where local people are given the tools and encouragement to thrive and where visitors are inspired and enriched by Eriskay’s stories, heritage and nature. The hoped-for impact of the new hub is the creation of lasting social, economic and health improvements while making plenty of new memories

Currently, there are no visitor information points on the island, so one of the many drivers behind the project is to address this obvious gap in Eriskay’s tourism offering.

Meanwhile, the search is on for a name for the new facility.

The historical society has put forward four suggestions; namely, Ionad Eilean na h-Òige, Eilean m’ Òige, Caisein Eirisgeidh, and Eilean na h-Òige.
However, the comann eachdraidh are open to other suggestions in Gaelic or English. You can indicate your preference from the four proposed names or make another suggestion by emailing This email address is being protected from spambots. You need JavaScript enabled to view it..