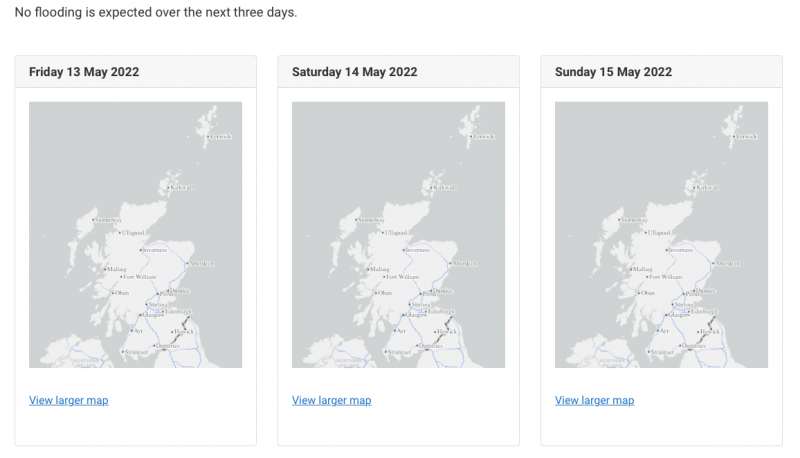 A new flood forecasting service is being trialled by the Scottish Environment Protection Service (SEPA), launched yesterday (Thursday 12 May).

The new Scottish Flood Forecast, supported by the Met Office, is now on trial offering digital, colour-coded map guidance to areas of flood risk up to three days in advance, indicating whether the source of flooding is from the sea, rivers or from surface water.

SEPA would like public feedback on the new service, which will also describe the potential impacts of flooding and link to advice and information on what protective action people can take if required.

The forecast will be produced every morning, 365 days a year, and runs alongside the current Floodline service, which issues shorter notice regional flood alerts and local flood warnings to people who have specifically signed up to receive them.

The new Scottish Flood Forecasting Service follows extensive user research, which showed a need for flood information to be provided earlier, in a simple and clear way, and the ability to check when no flooding is expected.

After the test period which began yesterday, the service is expected to be formally launched later this year.

Pascal Lardet, flood warning unit manager at SEPA, said: “More extreme weather and rising sea levels due to climate change mean we have to learn to live with flooding.

“It’s vital communities are supported to prepare for the potential impacts as early as possible. Thanks to this new product and the extra notice it offers, they’ll have the best chance to reduce the risk of damage and disruption.

“The three-day Scottish Flood Forecast is the biggest change to our flood warning service since it began in 2011. We have listened to customers to ensure we are creating a product that will help them prepare for flooding at the earliest opportunity.”

“This is becoming increasingly challenging as climate change impacts threaten to affect communities across Scotland and the risks from flooding increase.

“During this pilot period we look forward to hearing the views and opinions from communities throughout Scotland to create an improved final version.”