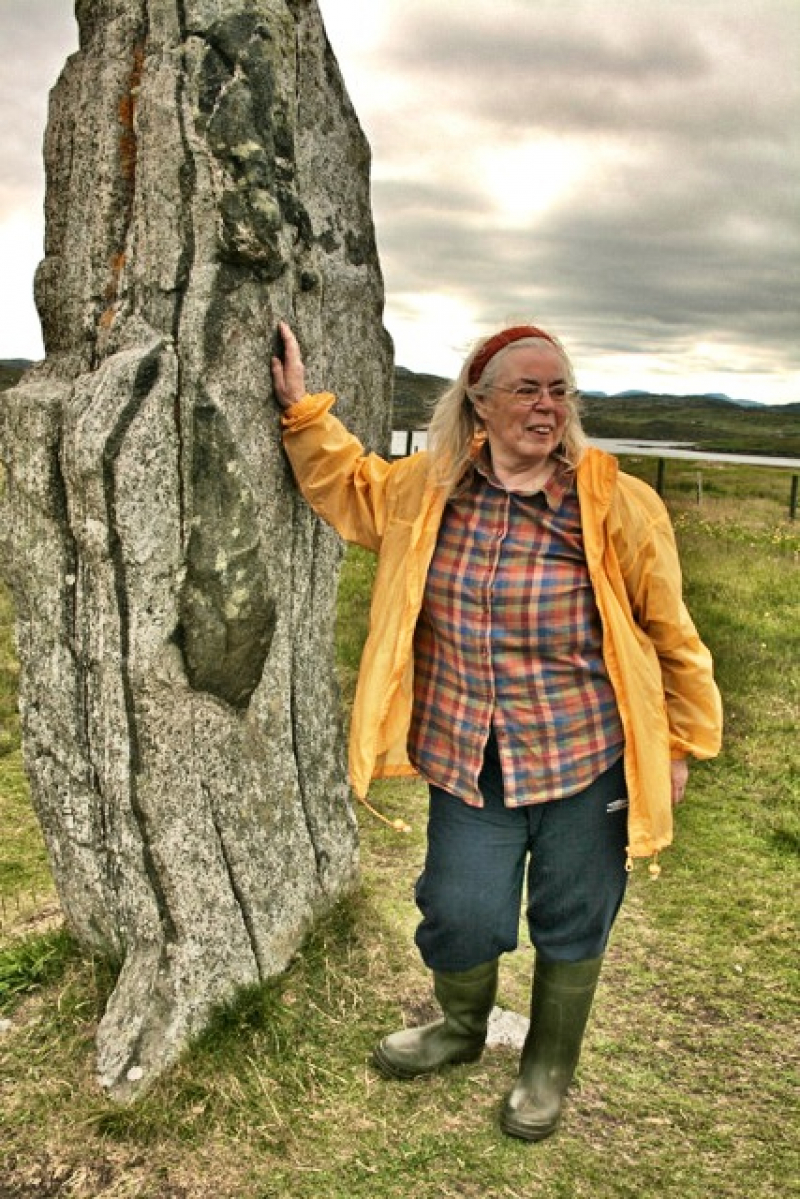 Passing of ‘Queen of Callanish’

A historian who made a life’s work out of researching and explaining the mysteries of Callanish has passed away at the age of 80.

Margaret Curtis was a uniquely well-informed, inspired and inspiring guide to the stone circles of Lewis, especially to the circles of Callanish, which she researched with a combination of scientific thoroughness and intuition over many years.

Margaret spent her early years in Birmingham and Felixstowe, studying music and archaeology at university.

After her first marriage, to Gerald Ponting, the couple arrived in Callanish in 1974, when she became a peripatetic primary school music teacher, working between schools at Breasclete, Achmore, Shawbost, Carloway and Bragar.

The environment of Lewis fired her enthusiasm for ancient history and archaeology and she became, over time, the principal authority locally on the Callanish stones.

Among books and papers she wrote, explaining her understanding of the history and mythology of Lewis stone circles, she and her husband co-authored ‘Standing Stones of Callanish’ in 1977. She continued to write, speak and guide people around the stones for the following forty years.

The couple embarked in immersive research into the stones, contributing not only their books and papers, but a BBC Chronicle programme after which, in 1978, they were presented with the British Archaeological Award for their research by HRH the Prince of Wales. 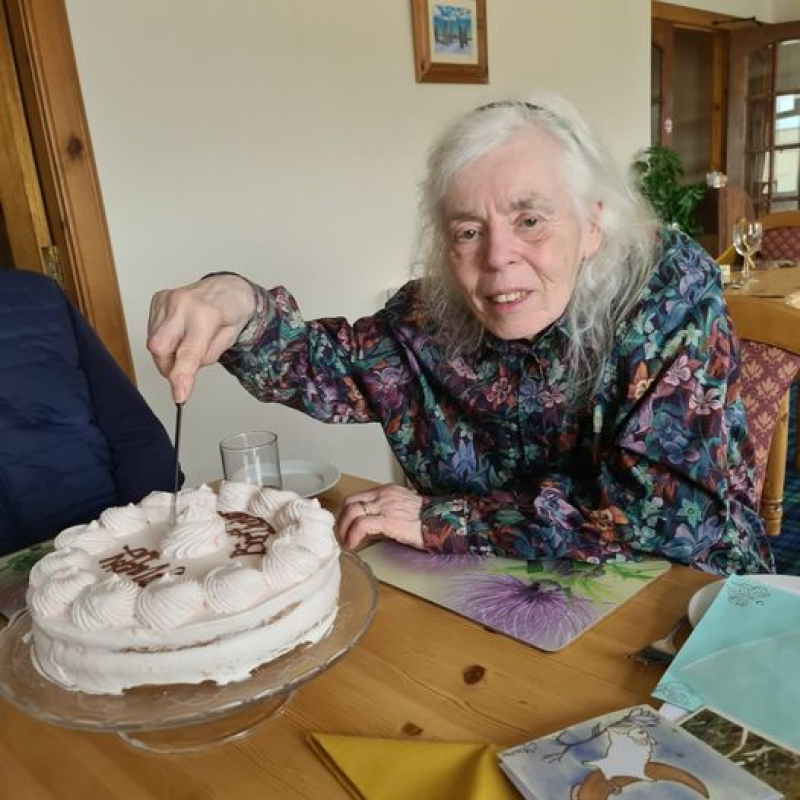 As an amateur archaeologist Margaret worked with archaeologists from the University of Edinburgh, beginning with the excavation of the end-stone of the east avenue at Callanish 1, the principal stone circle in the west side landscape.

Margaret had identified that a stone was likely to have fallen in that location using old drawings and the excavation she initiated in 1978 uncovered the stone from under the peat, later leading to it being raised in its original position. Local schoolchildren were invited to witness the excavation.

Although stone circles and their relationship to astral movements and human history were her principle interest, Margaret also responded to calls for her expertise with local finds from other epochs of history.

With her second husband, Ron Curtis, she assisted in a 1991-92 excavation by Edinburgh archaeologists on finds of bone and artefacts emerging from wind-blown dunes at Cnip on the Bhaltos peninsula.

The remains were later described as the burial of a ‘Viking princess’, buried together with ornaments at a site which contained two other burials. 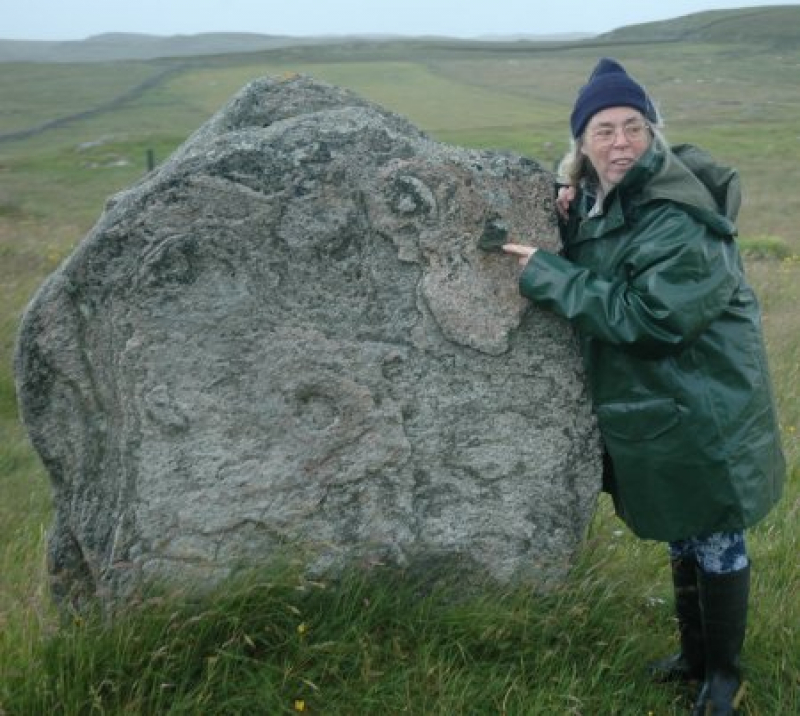 Margaret’s interest in astro-archaeology shaped her work with the public as an interpreter and well-informed guide. She became a champion of the idea of the stones as a guide to goddess worship, explaining how the hills from Mòr Mhonadh to Roineval can be seen from Callanish as a sleeping woman, known as Cailleach na Mointeach (the old woman of the moors).

She described how, every 18.61 years at the major lunar standstill, the full moon rises over the form of the sleeping woman and then passes behind the Callanish stones, creating a spectral illusion which would have astonished the ancient people who witnessed it.

Writing on the website of the Geo Group, Margaret said: “We saw this rare and spectacular event in June 1987 with friends from across the world. None of us will ever forget the beauty of that calm, clear summer night.

“Even after years of scientific study, we had never anticipated the wonder and drama of the event itself.”

Margaret’s sense of awe and wonder was shared with visitors as part of her work guiding and explaining the stories connected with the stones. Indeed, many of Callanish’s stone circle visitors came as much on a pilgrimage to meet her as to be guided around the stones.

After spending time in her company in 2014, American magazine writer Laurel Kallenbach wrote: “Margaret is truly the Wise Old Woman of Callanish. She says she’s personally most interested in the area from a scientific point of view, but she acknowledges that her work also draws from local history, folklore, and ethnology.

“She’s given tours to modern pagans and goddess worshippers, and she admits that their insights into earth-based rituals inform her work. After all, there are no written records about Callanish, so oral tradition in the form of legends can contain kernels of truth.”

English artist Jane Tomlinson was similarly inspired by time spent with Margaret, who she described as ‘as unique and enthralling as the monument to which she has devoted her life.’

The news of Margaret’s passing, on Saturday (26 March) at Western Isles Hospital, brought numerous tributes from visitors, Callanish residents and historians around the world, who described her as ‘a wise soul’ who left ‘a fine legacy’ and gave great knowledge to many people.

One said: “She was an inspiration and wonderful company and taught me so much. So sorry to hear of her passing – she will join the giant guardians of the stones.”

Another said: “She was an inspirational woman with total dedication to Callanish, its history and mysteries. She will be greatly missed.”

Uig crofter and heritage consultant Malcolm Maclean, the former director of Pròiseact nan Ealan, wrote on Facebook: "I had the great privilege of assisting Margaret with her early Calanais research in the 1970s and 80s.

"She started by mapping all of the many sites in the area, went on to detailed study of each individual stone and knew more about Calanais than anyone else alive. Her discovery of a fallen megalith – buried just outside the fence at the main site – prompted the first archaeological dig to use modern scientific methods and this one dig is responsible for a huge proportion of what we now know about Calanais. Passionate amateurs are not supposed to be so successful, however, and some of the professional archaeological establishment never forgave her for it. Her work deserved far more official recognition and support but her love of Calanais and it’s mysteries was all the motivation she ever needed.

"Margaret could be eccentric but her unique contribution to island history and archaeology is immense. She devoted decades of her life to studying a small but very special corner of our planet and her discoveries have enriched all of us for generations to come. She still had so much to do and was confident the next lunar standstill will provide dramatic new confirmation of Calanais’ global importance and a further vindication of her life’s work.

"I have lost a very dear friend and we have all lost a very special islander. Her legacy will long outlive her."

Margaret is survived by her son Ben, daughter Becky and grandchildren Eloise, Sasha, Tabitha and Calum. A memorial service is to be arranged during April at St Peter’s Church in Stornoway.

The pictures show Margaret on her 80th birthday last summer (Callanish Digital Designs) and during tours of the stones with visitors Jane Tomlinson and Laurel Kallenbach.