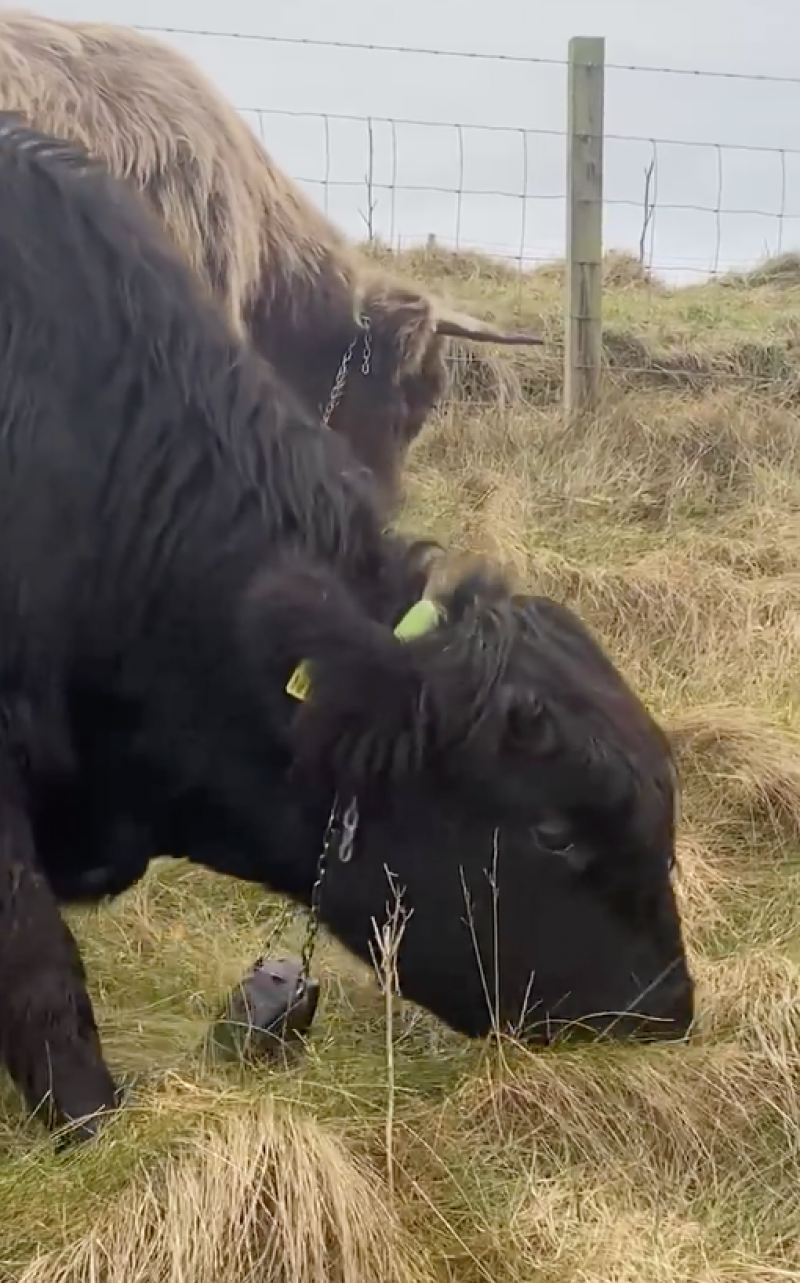 Cows go high-tech on An Lot

A new, high-tech solution to protecting both grazing land and cows is being tried, tested and approved at An Lot in North Dell, where ‘geo-fencing’ is helping to manage the grazing of cattle in a notoriously boggy area.

He’s so convinced that the innovation has succeeded that he’s participating in an open day in March, run by the Nature Friendly Farming Network and the RSPB, giving other crofters the chance to come and see the system in action.

At first glance his cattle seem to be wearing old-fashion cow bells around their necks, grazing undisturbed despite what looks to be quite a bulky necklace.

In fact the neckwear is a battery-powered collar, which works together with an app on Sweeny’s phone to create the geo-fencing – virtual fences with invisible, crofter-set boundaries.

Sweeny said: “The first thing I do every morning is to check where the cows are on my phone. Most crofters who have kept cows know that you’re always getting the call saying ‘your cows are out’, but I’ve had these collars since October and they’ve pretty much ended any cattle-escape incidents overnight.”

Over recent winter months Sweeny’s cattle have been grazing on boggy ground near the Loch Stiapabhat nature reserve. It’s usually an area that’s dangerous to livestock and is only viable now due to the collars.

Sweeny said: “I set a boundary via the app on my phone and the collars give a mild electric shock (about one third the power of an electric fence) if a cow reaches that boundary. It gives three audio alarms as she approaches, followed by the zap.”

As well as managing where the cows go, the collars feed back information to Sweeny via the app, which he can check, as he explains ‘without leaving my bed’ if that’s the way he wants to go.

He said: “Initially my motivation for getting them was to manage the grazing and to keep the cattle safe, but as I am using them I find more advantages. I can check where each cow is and I can see if she hasn’t moved.

“She might be stuck in a bog, she might be dead or she might just be sheltering from the weather, but I can go straight to her and check.

“In winter I feed them once a week and there are three or four spots I go to try and get the food close to them. Now I can just look on my phone, see where they are grazing and go to the nearest point to put food out for them, so it’s saving me time and making the work more efficient.

“In the summer I could push the boundaries out and let them go further onto the moor, then I could use a drone to check them rather than spending time roaming about on the quad. It’ll be interesting to see how that develops.”

The purchase of the collars wasn’t cheap, but the CAGS grant made it possible and Sweeny thinks it’s an expensive gamble that has paid off.

“Most people use CAGS money for fences and sheds and such like, but these collars cost me about £230 each, plus VAT. I got the support from CAGS and they work so well I have been able to afford to get another cow.

“The solar-charged battery lasts up to nine weeks and I can see on the app the status of each battery. I can already see, as the days get longer, that they are charging up more and they should last much longer in the summer.

“I think they are great and can be used to get lots of neglected, unfenced crofts back into action.”

Also welcoming the innovation is the RSPB, whose representative Shona Morrison will host the event on 4 March as part of the Corncrake Calling initiative.

They see geo-fencing as part of a move towards conservation grazing and have facilitated the visit to Ness as part of the agroecology partnership project ‘facilitating mindset change’.

Crofting, grazing and the potential of Nofence technology is one of 15 online and in-person events running through February and March to explore better farming with nature, across Scotland (full details here https://www.nourishscotland.org/projects/agroecology-mindset-change/)

Meanwhile in Ness, other crofters are definitely interested in the potential of geo-fencing. Nofence invited Sweeny to co-present an online seminar on Tuesday (15 February), showing how grazing technology can marry with traditional crofting practice.

The open day on Friday 4 March at Comunn Eachdraidh Nis will give crofters a chance to hear about the system in person, before going out to see the cows and collars in action.

The free event includes lunch and is open to everyone, with booking at https://www.eventbrite.co.uk/e/265263378907

Sweeny said: “Even mainlanders can come, you just have to get yourself here.”

Pictures show the cows peacefully grazing with their Nofence collars (An Lot/Donald Macsween).