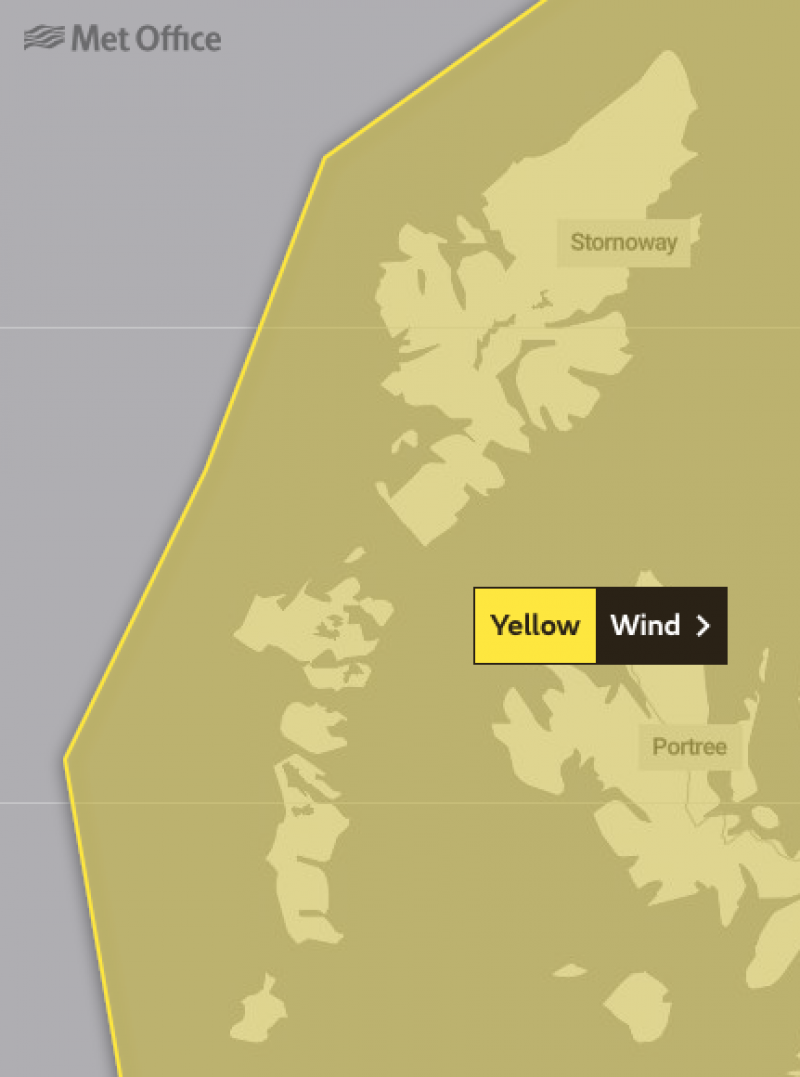 Three days of gale warnings have been issued this morning (Friday 28 January) by the Met Office, as strong winds blast most of Scotland over the weekend.

And CalMac’s ferry services across the network are already showing widespread disruption, as wind speeds build through today.

The consecutive warnings of wind cover Saturday, Sunday and Monday, with the first warning coming into force at 4am tomorrow (Saturday).

It warns of strong winds crossing Scotland between 4am and 3pm on Saturday, with gusts of 50-60mph widely expected and a chance of a brief period of gusts above those speeds in places.

After a lull in the winds, a new warning comes into force at 6pm on Sunday, when the Met Office warns of a period of strong north-westerly winds developing across western Scotland, lasting until 12 noon on Monday (31 January).

The strongest gusts are forecast around coastlines and over the hills, with exposed locations expected to see 50-60mph gusts for a time. There’s a small chance of more damaging gusts, reaching 70-80mph around exposed coasts and hills.

Possible impacts include power interruptions and loss of mobile phone networks, as well as sea spray and debris being thrown onto exposed coastal routes and properties.

Cancellations to island ferry connections begin today, with this afternoon’s services between Stornoway and Ullapool, the night-time freight service on the same route tonight and tomorrow morning’s Stornoway Ullapool return service all cancelled. Later services on this route are also liable to disruption or cancellation.

There will be no departures from Uig or Tarbert this afternoon and the 6.15pm service from Uig to Lochmaddy has been brought forward to 2pm. Later services on these routes are also liable to short-notice disruption or cancellation.

The Sound of Harris service has now stopped running for the day, and early departures from Berneray and Leverburgh tomorrow are also cancelled, with a review due at 11.30am tomorrow for later services.

The Lochboisdale to Oban/Mallaig service remains cancelled until 6 February due to maintenance and repair issues.

In Barra there’s further disruption, with Sound of Barra services now cancelled for the day and suspended pending a 12noon review on Saturday. That’s followed by disruption of a different kind on Sunday (30 January) as MV Loch Alainn has essential work done to the vehicle ramps.

A passenger charter for foot passengers only is scheduled to operate on Sunday, but CalMac says: “Due to uncertainty of all the weather fronts and low pressures forecasted over the weekend, this service is liable to disruption or cancellation at short notice.”

Services between Oban and Castlebay have also been suspended for today and tomorrow, with the next scheduled service planned to operate on Sunday.