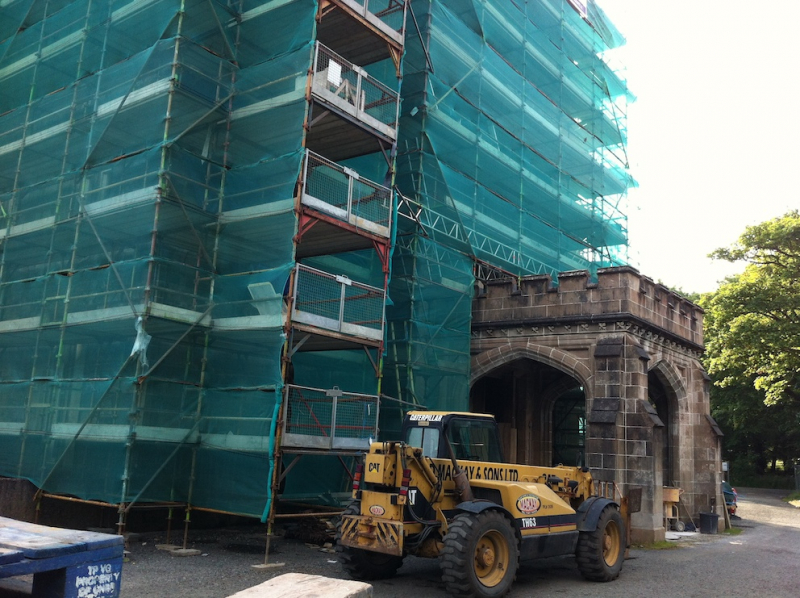 After settling a no-fault legal claim over their handling of the hotel rights for Lews Castle, Comhairle nan Eilean Siar councillors seem to be split down the middle about revisiting the affair after being warned the council may have breached the law.

In September 2020, the Comhairle paid out £450,000 to the Kenman Holdings hotel group after they were snubbed for the lucrative accommodation and catering contract following the £20 million refurbishment of the castle. Instead, the contract was awarded to hotel operator Natural Retreats in a procurement process that was alleged to be badly flawed. The contract award prompted Kenman Holdings, the parent company of the Cala Hotels Group in Stornoway, to launch a legal challenge against the council in 2015 and later seek approximately £23million in compensation.

While the out-of-court settlement looked to be the end of the matter, a report to the Comhairle by Monitoring Officer Tim Langley suggests the council may well have contravened the law.

In his report, Mr Langley stated that since the legal action had been settled without admission of liability, no contravention of the law had been established. Therefore, any view of the matter would be an opinion and not definitive.  “However, when considered on the balance of probabilities, it is apparent that the actions of the Comhairle in respect of the procurement process gave rise to contraventions of the law,“ he went on.

“Given that those contraventions are in the past and cannot now be remedied, and that Internal Audit has made various recommendations to improve the Comhairle’s practice in future, it is not considered necessary to make any further recommendation.”

The report recommended that the council note the matter.

However, two days later, on December 10 past, ten SNP, Alliance, and Alba group councillors wrote to Council chief executive Malcolm Burr requesting he arrange a special meeting of the council to debate the matter further and ask questions about the Monitoring Officer’s report.

The subsequent special meeting was live-streamed on YouTube. But with only 19 channel subscribers and no obvious mention of the meeting on the Comhairle’s website or social media, it’s debatable how many people were aware of the meeting at the time. However, as of the morning of Monday January 24, the video has had 213 views.

Convener Mr Norman A Macdonald chaired the meeting, with only a handful of the 25 councillors involved actually present in the chamber. The remainder joined the meeting remotely by video link.

Mr Macdonald explained that the meeting had been called following a request for a special meeting of the Comhairle under Standing Order 6.

Chief Executive, Mr Malcolm Burr, reporting to the meeting, said ten members of the Comhairle, more than the required quarter of members, had lodged the request for a special meeting. As it was best to arrange special meetings within 14 days, the meeting on December 22 had been arranged.

In addition to the reasons noted in his report, he further advised that since the Comhairle had resolved to note the report at its meeting of December 8, this would require the suspension of Standing Orders since it concerned a decision taken within the last 12 months.

When that is the case, said Mr Burr, Standing Order 67 applies, which requires that a two-thirds majority of members present voting in favour of the matter being further considered unless the chair ruled that there was a material change of circumstances.

However, before the Convener could put the matter to a vote, Councillor Gordon Murray said he would like to raise a point of order as he was not sure the advice being given was a correct interpretation of Standing Order 67. Councillor Murray contended that Standing Order 67 only applied if the Comhairle wished to change a decision made in the last 12 months.

He commented: “I don’t think anyone has said they want to change the decision. They will be asking questions, so no one has put any amendment forward. I think it’s not the correct interpretation of Standing Order 67. And if members are not allowed to ask questions on this report, I think you may be in breach of Standing Order 36.”

Councillor Murray told the meeting Standing Order 36 states that all matters before the Comhairle, which are the subject of a report from the Chief Executive or a Director, can be introduced by the chair to allow members to ask questions, seek clarification, or request further information.

But Mr Murray added he would like to hear the opinion of the Monitoring Officer on his interpretation of Standing Order 67.

Mr Burr pointed out that Mr Derek Mackay advised the Comhairle on procedural matters rather than the Monitoring Officer.

He continued: “But I am happy to give the reasons for my advice to you. The reason for this request for this meeting is to allow full debate and allow members to ask their questions on the Monitoring Officer’s Report. Now, the matter was competently on the agenda of the meeting of December 8, and this request seeks to reopen a matter which the Comhairle has considered, and that is the fundamental point here.”

Said Mr Burr: “The matter was on the agenda, the Monitoring Officer presented his report, questions were asked, you, as Convener, took the view that you did as to the continuation of the debate. But the point is that the matter was on the agenda and noted. It cannot be on any reasonable interpretation of the Standing Orders that something which the Comhairle or a committee has noted can then be reopened for discussion unless the Standing Orders are suspended, and that is the reason for the advice before you today.”

At this point, Mr Burr asked that Mr Derek Mackay, the Democratic Services Manager, be brought in to raise any points that the Chief Executive had missed.

Mr Mackay commented that Standing Order 36 allows the chair or Convener of the meeting to “gauge the sense of the meeting”. He understood that this is what the Convener had done at the earlier meeting in December.

Uist councillor, Mr Calum Macmillan, then raised a further point of order, challenging the applicability of Standing Order 67. He pointed out that Standing Order 67 had not been applied at a previous meeting on September 9 when an extant decision of the Comhairle was overturned from August 21.

“How can we have Standing Order 67 being applied today when it was not applied on September 9?” asked Mr Macmillan. “There has got to be parity between the two occasions. They are quite different in that the report presented to us on December 8 was for noting. But in that report, it was said that on the balance of probabilities, I recall, there was a legality, but it was not to be reported.”

Mr Macmillan then asked why the report was before councillors for noting if it was not for approval?

He argued that it was up to councillors as the political body to say whether the matters would be for reporting to others or not. On balance, Mr Macmillan was not in favour of reporting it, but they had not been afforded that possibility.

He went on: “And I still contend that it is for approval, not just for noting, because there is a material matter that would be of concern and therefore, I would contend that Standing Order 67 having not been applied on September 9 should not apply on December 22 this year.”

Clarifying his statutory role, Monitoring Officer Tim Langley said his statutory obligation is to consider whether it appears to him that there has been a breach of the law and to report if he considered that to be the case.

“I have that obligation and that discretion to decide whether to report or whether not to report,” Mr Langley told councillors.

Before the Convener could put the suspension of Standing Orders to the vote, Loch a Tuath councillor, Mr Calum Maclean, attempted to raise a further point of order. He asked if the Convener was aware of “recent correspondence” issued by Council Leader Mr Roddie Mackay, lobbying selected councillors to deny the request for the suspension of Standing Orders. And further, if the Convener approved of the language which referred to those councillors seeking to ask questions as “unreasonable, unpleasant, undignified, unpleasant” and engaging in a ‘witch hunt’.

But the Convener ruled that Mr Maclean’s interjection was not a point of order as it was not part of what was being discussed but introduced a new aspect entirely.

Pressed on whether he was aware of the Council Leader’s comments, the Convener said it was not a matter for him to make a decision upon. However, he had made it clear that points of order had to be pursuant to the report being discussed.

A roll call vote was then held, and the move to suspend Standing Orders was defeated by 13 votes to 12.