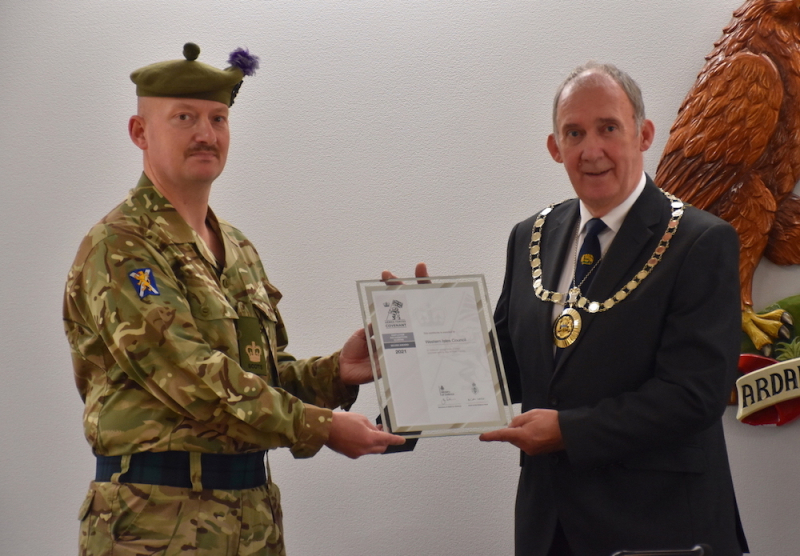 Award for work with reservists, cadets

The award certificate was presented on November 16 at the Comhairle Chamber in Stornoway. The certificates are for employers who joined the Ministry of Defence scheme in 2016, with both Gold and Silver awards reviewed and revalidated on a rolling five-year basis.

WO2 Colin Smith and Private Cameron Thompson from C Company of 7 SCOTS presented the award to Council Convener Councillor Norman MacDonald. As well as being an Army Reservist, Pte Thompson also works as a purchasing assistant for the Council.

Convener MacDonald, who had previously been a cadet, spoke fondly of that time – adding that it was vital to acknowledge the contribution of those who serve, or who have served. He said the Council would do all it could to support local reservists and cadets.

He added that it was often said that reservists are “twice the citizen”, but in island communities they are often three or four times the citizen, with many also taking on the role of coastguards or other members of the emergency services on top of their day jobs and Armed Forces commitments.

WO2 Smith spoke to highlight the challenges of recruiting and retaining reservists, with COVID-19 restrictions impacting and delaying training activities.

He also thanked Mr MacDonald and the Council for his support.

There are strong links to the Armed Forces across the islands. The tweed used in the refurbishment of the Comhairle Chamber is the Iolaire tweed designed by Harris Tweed Hebrides to commemorate 100 years since the sinking of the Iolaire and the loss of 201 men returning from the First World War; a tragedy that impacted almost every family on the islands.

As ever, the memorial ceremony held on November 14 had a huge turnout of families, despite poor weather. 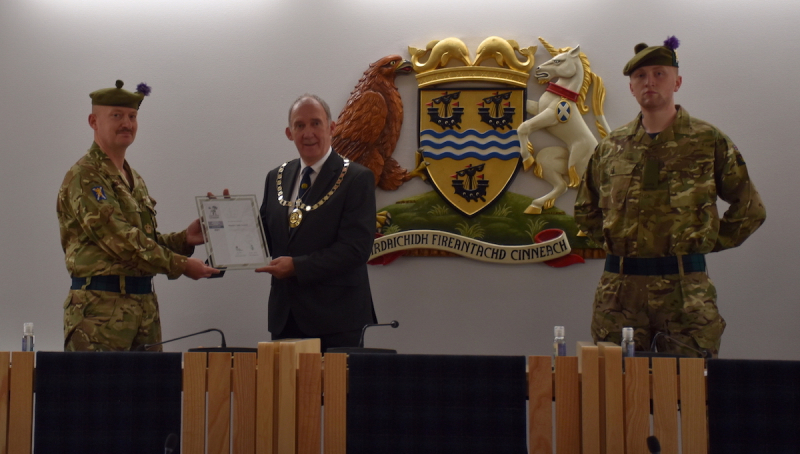 The ERS Silver Award is in recognition of the support organisations, such as Comhairle nan Eilean Siar, give to the Armed Forces community.

The ERS Scheme recognises those who demonstrate or advocate support to that community and align their values with the Armed Forces Covenant – a pledge from the nation that those who serve or who have served and their families are treated fairly.

Silver Award winners must meet certain criteria, including: employing at least one individual from the Armed Forces community, actively ensuring that their workforce is aware of their positive policies, demonstrating support to mobilisations of reservists and providing at least five days’ additional leave for training.

For organisations to be revalidated they must continue to adhere to that criteria. The revalidations recognise the long-term support employers have given to the Armed Forces community and highlight that, through their consistent support over a sustained period of time, they have been able to continue to champion and demonstrate their forces-friendly measures.

For more information on the Armed Forces Covenant, click HERE.

For more information on the Employer Recognition Scheme, click HERE.