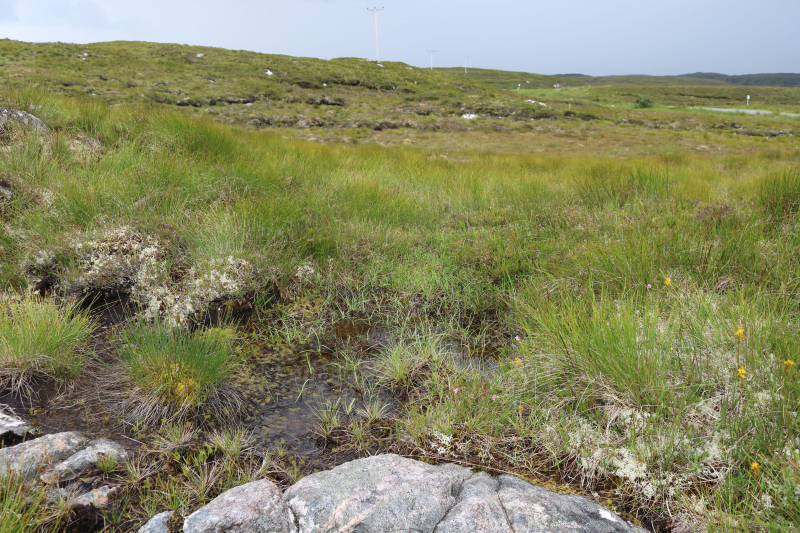 In keeping with the theme of global talks at COP 26 in Glasgow this week, Scottish Water has today (Tuesday 2 November) given an update on peatland restoration projects in Lewis.

Peatlands act as vital carbon storage, and peatland restoration schemes such as those at Loch Fasgro and Loch Orasaigh  help protect drinking water sources and biodiversity.

The restoration projects return areas of blanket bog to more natural conditions, stopping the erosion of peat, regulating the flow of water and raising the water table, thus encouraging peat-forming vegetation to thrive.

Over four hectares of peatlands has just been restored at Loch Fasgro on the west of the island, while the third phase of a 20-hectare restoration project at Loch Orasaigh is in the planning stages. It will take the total area covered by all three phases at that site, south of Stornoway, to just over 60 hectares.

When peat dries out and cracks, the carbon it had been storing since its formation is released into the atmosphere as greenhouse gases. Repairing the damage to exposed peatlands and blocking drainage ditches to raise the water table at the sites allows new peat to form.

Scottish Water aims to deliver around 330 hectares of restoration across Scotland in 2021/22, capturing and storing the equivalent of 231 to 924 tonnes of carbon dioxide per year.

Malcolm Walker, Scottish Water catchment liaison officer, said: “Peatlands are the largest natural carbon store in the world and play a vital role in tackling climate change - projects such as these which focus on restoring and protecting these areas are of increasing importance as we all focus on the drive towards net zero emissions.

Shetland News takes a look at some of the less obvious environmental costs of building wind farms on peat moors.
https://www.shetnews.co.uk/2021/10/29/experts-warn-that-wind-farms-should-not-be-built-on-peatlands/

“When the peatland is exposed to the elements, it gets washed into our drinking water reservoirs and we then have to remove it during the treatment process at the water treatment works, which can be costly and time consuming.”

The team has worked closely with the local estates and grazings committee at both locations to make sure the work is done sensitively, particularly with respect to the long tradition of peat cutting for domestic fuel which still continues on the islands.

“We explained the issues we were having in the treatment process and the peat cutters were offered alternative banks outwith Scottish Water’s drinking water catchment area.”

“When we cut the peat, you’re left with this bare land part of it and if you have running water running off it, the silt will then make its way through the water course naturally into the reservoirs.

“Scottish Water explained to us exactly what they were wanting to do and how they were trying to do it, and we decided that we would like to take the opportunity to move forward with them to try and improve source water quality - if it reduces the amount of dirty run off, it costs them less to produce the water that we drink.”

Project officer Ben Inglis-Grant said: “It has been great to see how these damaged peatlands can be put on the road to recovery whilst balancing the various groups’ priorities.

“By reversing and limiting erosion and enabling the peatland to recover to its natural state, at both Loch Fasgro and Loch Orasaigh, we are not only restoring the local peatland habitat and improving nearby water quality, but we are also playing our part in helping to meet the Scottish Government targets for peatland restoration in Scotland.”

The picture shows the Loch Orasaigh site with disused peatbanks and new peat forming in the boggy ground.