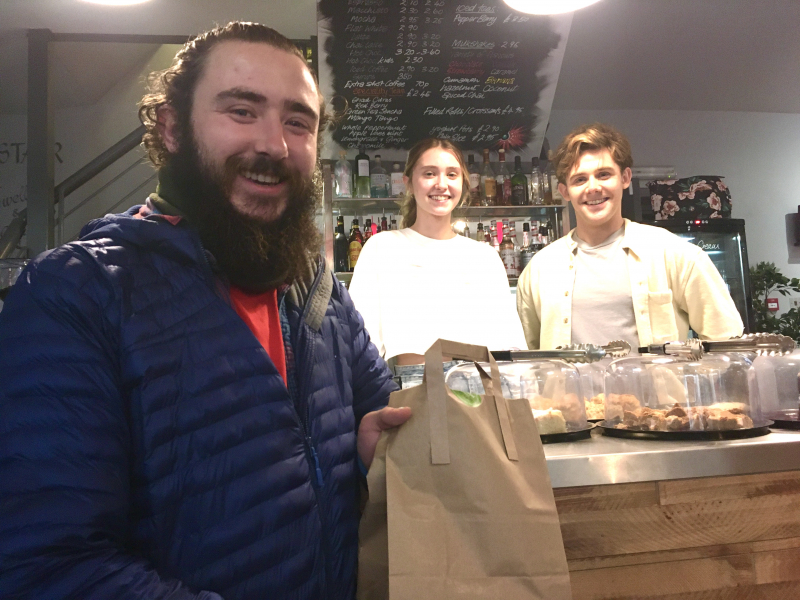 The army veteran, who has hit the road round the coastline of Britain to raise £10,000 for services welfare charity SSAFA, walked into Stornoway on Wednesday soaked to the skin and smiling from ear to ear.

The last leg of his four-week island walk, from Vatersay to the Butt of Lewis, was the infamous ‘bog slog’ over moorland between Ness and Tolsta, completed in driving rain and howling wind, with sodden peat and fast-running burns to negotiate.

Drying off and warming up at Stornoway’s Artizan café yesterday, he said: “That tough walk between Ness and Tolsta sticks in my mind as the hardest walk and the biggest experience of my trip. 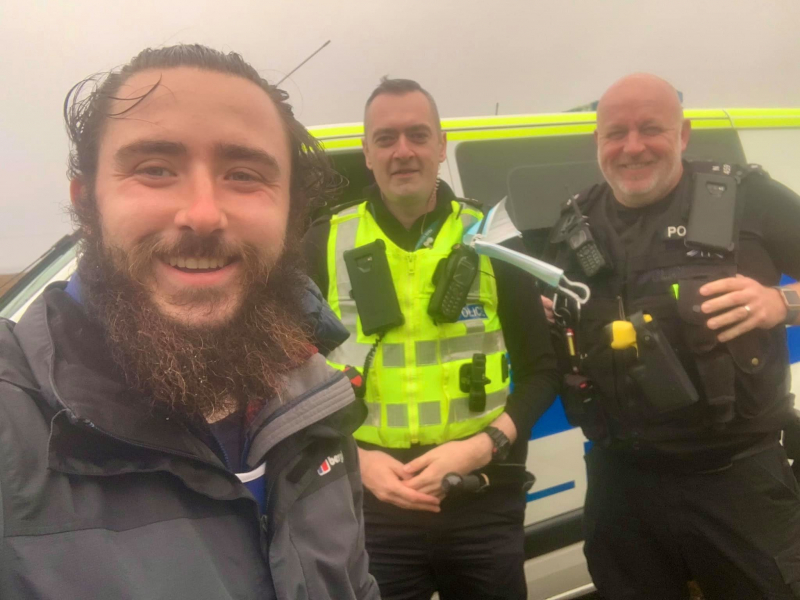 “I had to cross a river where the stepping stones were submerged in the water and drink from a waterfall running brown with peat. I tumbled over hidden peat banks and had to pitch my tent using boulders for tent pegs.

“I’m happy I did it. I learnt a lot about myself physically, mentally and spiritually and I saw some amazing sights, from a galaxy of stars above my head to a river running so deep and fast that I didn’t think I could cross.

“But I did, and when I reached the opposite bank I just punched the air and shouted ‘yes!’ Now I feel more determined and motivated than ever before to really look forward to what’s to come.”

Throughout his time walking the coasts of the Western Isles, Dan has been bowled over by generous hospitality, kindness and an overwhelming sense that people in the islands still know how to enjoy their lives. 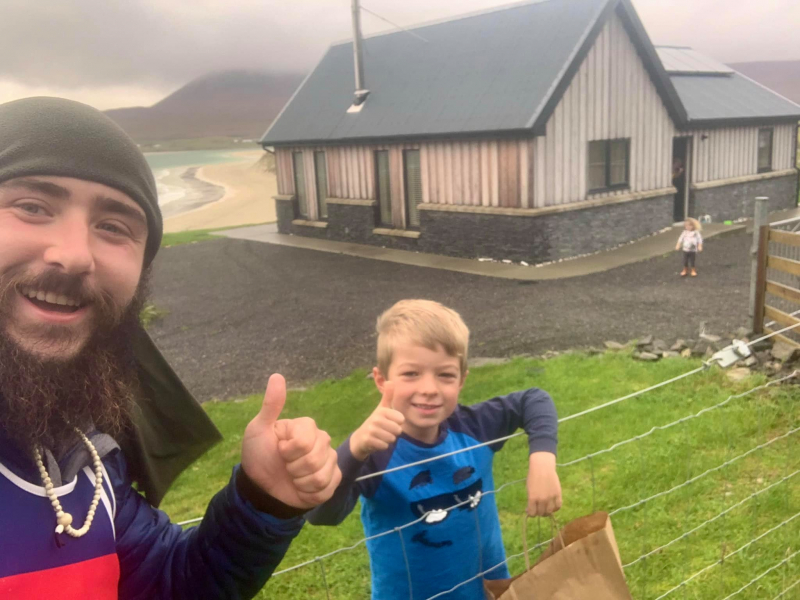 He said: “The people here are unbelievable – how easily they can open their door, let a stranger in and give them what they need. I’m so grateful for it and so blessed to have received it.

“I only have my experience of the cities to compare it to, but everyone here is so much happier, kinder, more positive, calmer and I think most of it is due to where they live. The community spirit is second to none.”

Dan’s become something of a celebrity during his time in the islands, with many people following his progress on his Facebook page at https://www.facebook.com/danwalksuk/

Through that he’s documented the people he has met and the help that he has been offered, from accommodation to hot drinks, pot-noodles and even a donated tent.

His stand-out memory is of the young lad he met in Harris, offering a bagful of treats as he passed by. He said: “I just remember walking down that hill and that wee boy running out with a big bag of goodies and a fiver in his hands. It really stands out as an example of the kindness and generosity of others.” 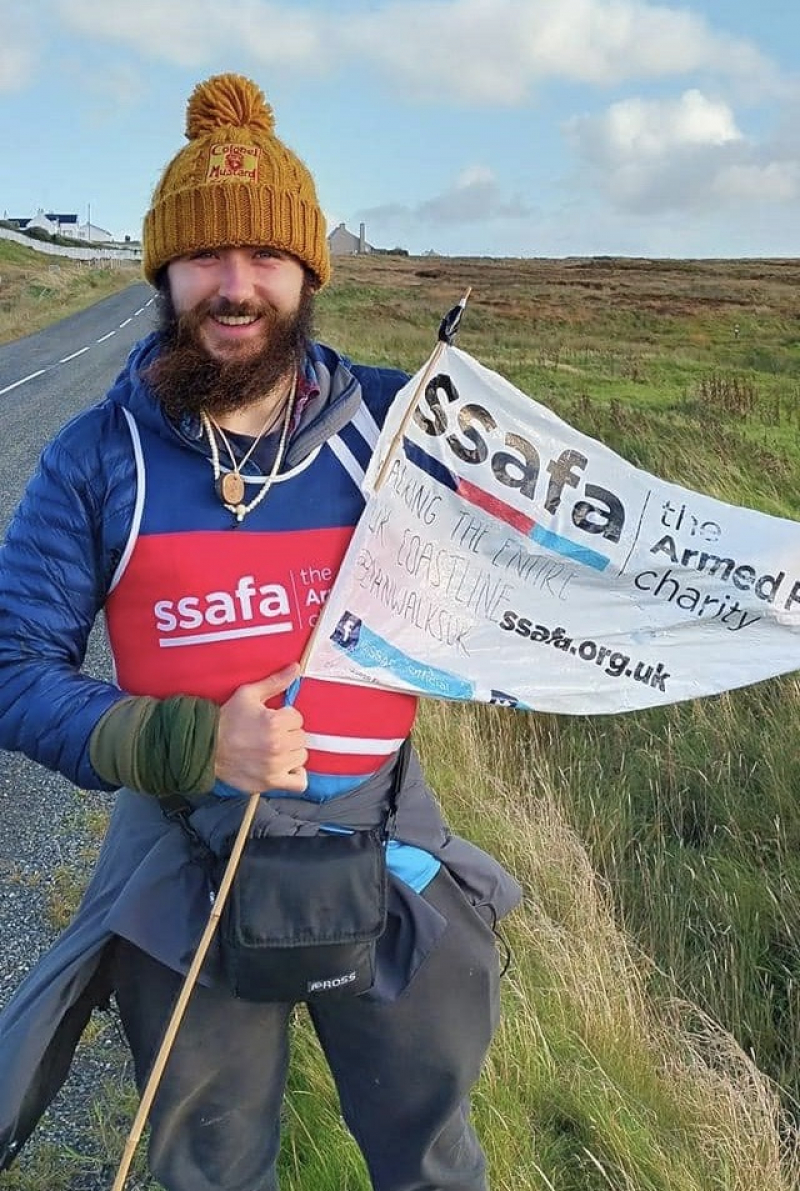 Dan plans to sail for Ullapool this afternoon to take up his walk again, heading north along the west coast, but he plans to come back to the islands after his three-year round-Britain marathon has finished.

He said: “I will definitely come back here when I’ve finished my walk, hopefully bringing my girlfriend to go round the islands and meet the people I’ve become friends with again.

“The islands have given me back the drive and fire which I thought I was losing. I’m hoping it will still be there until I cross the finishing line in three years’ time.”

You can support Dan’s fundraising for SSAFA at https://www.justgiving.com/fundraising/danwalksuk

The pictures show a young man handing Dan goodies at the roadside in West Harris, Stornoway police constables Paul and Rick meeting him with noodles and sweets in the Harris hills, Dan smiling on the road through Tolsta and receiving a warm welcome at Artizan café in Stornoway from staff members Mary Ann and manager Seumas.