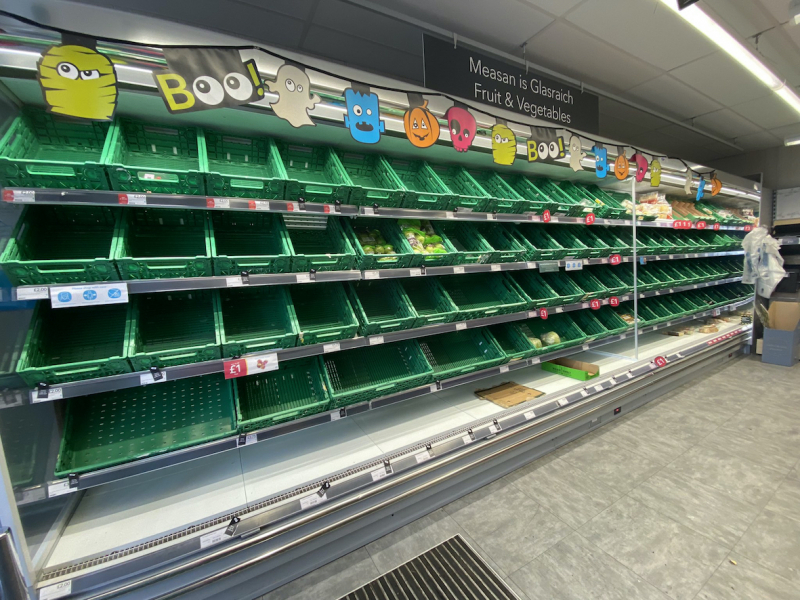 Amid reports of shortages and delivery problems – delays and lost items – right across the post-Brexit economy, the Scottish Co-operative food stores have been hit by a supply crisis which has left unusually empty shelves on a variety of islands.

It’s stated that “the Co-op ordering system has suffered a large failure affecting all meat, produce and chilled lines, including milk.”

Stornoway’s Co-op reported yesterday (Wednesday October 27): “We have not had access to our email since early Tuesday morning.

“Our IT support team are working to fix this issue. If you have emailed an order for delivery today, we are unable to process it. We apologise for the inconvenience. Our click and deliver and collect service are still operating as normal.

“As was the case on our last delivery on Monday, there will be minimal stock this evening.

“The Co-op is trying to divert stock from mainland stores to its island stores, but we have no visibility of what that will be and in what quantities.

“I can only apologise for the continued disruption and assure you that this is being dealt with as the highest priority. We hope that this will be resolved by Friday night's delivery.

“I would like to take this opportunity to thank the fantastic team of colleagues in Castlebay who are working hard to ensure that our availability across ambient and frozen is maintained throughout challenging times.”

Islanders on Mull were told that the situation at the Co-op in Tobermory and a number of its other stores was caused by a "severe ordering system failure".

It said it was working to resolve the problem and new stock was arriving at its Mull supermarket.

But islander Andrew Wilson said on Twitter that the situation affecting essentials had been going on for months.

Mr Wilson said: "We keep getting the usual response that it's a nationwide problem with shortages.   The only problem for Mull residents is that we don't have any other option to shop elsewhere.

A Co-op spokeswoman said: "We understand the genuine inconvenience this will have caused our customers and are taking immediate steps to divert emergency additional supplies to the store to help them restock as quickly as possible, as serving our island communities is a priority and a responsibility we take very seriously."

On Twitter, Mull islander Sam Jones said: “We’re can’t just pop to Tesco instead. Our alternatives are a Premier & Spar round trips of 14 & 24 miles.”

In another tweet, Isles businessman Peter Brown from Barra stated: “They made a corporate decision in Manchester some years ago to become a convenience store so all their purchasing decisions and shelf meterage is predicated on a convenience store, not a small supermarket.

“I think areas which depend on a Co-op should consider a community buyout.”