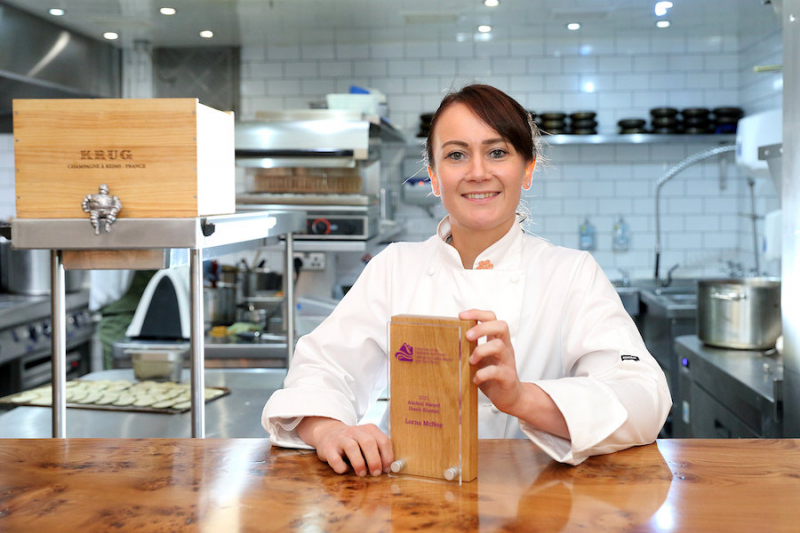 A high flying chef who started out washing dishes before taking a course at the University of the Highlands and Islands, has now gained the UHI Alumni Award for 2021.

Lorna McNee, aged 34, from Forres was selected for the title in recognition of her professional success which saw her receive a Michelin Star just five months into her first head chef role.

Lorna, who graduated with a HNC in professional cookery from Moray College UHI in 2008, was awarded a Michelin Star in January this year for her work at Cail Bruich in Great Western Road, Glasgow.

She is the first solo female chef in Scotland to be awarded a star in 20 years and the only female chef to have ever received one in Scotland's largest city. The award was Glasgow's first Michelin star in 18 years.

Lorna started her career washing dishes in the Little Sicily restaurant in Forres, before discovering her passion and talent for cookery at Moray College UHI.

During her studies, she was offered a placement with Gordon Ramsay at Claridge's Hotel in London, which she was able to attend thanks to the financial support of university donors. This sparked the creation of the university's student development fund which has since supported over 500 students to take part in opportunities to develop their talent through donor gifts.

She worked as an apprentice at Restaurant Andrew Fairlie in Gleneagles before joining Cail Bruich as head chef in August 2020.

The UHI alumni award celebrates the outstanding achievements of its alumni and recognises the impact they have had on business, public or academic life. It is presented annually to a former student who has demonstrated notable success in their professional career, has had a significant impact in their community or has demonstrated an ongoing commitment and contribution to the university.

As this year's winner, Lorna was presented with a trophy by the university's principal and vice-chancellor, Professor Todd Walker, and head of development and alumni, Alison Wilson, at Lorna's restaurant in Glasgow.

Lorna said: "It's such an honour to have won the 2021 alumni award. The university gave me so much while I was studying there, which helped me grow into the person I am today and I'm delighted that my achievements have been recognised in this way."

Lorna credits much of her success to her education at Moray College UHI and she continues to visit whenever she can to speak with current students: "It's not that I disliked school, but I wasn't very academic. I was always much more hands on and college was perfect for that. I was given lots of encouragement, which I really hadn't had before. It meant a huge amount to me to be told by my lecturers that my knife skills were really good and that my béchamel sauce was well-seasoned."

Professor Todd Walker said: "It is a pleasure to present Lorna with this award. She is a very deserving winner and an excellent example of what our alumni can achieve. We hope her story will inspire our students and the 30,000 other members of our alumni community."

Moray College UHI principal, David Patterson, added: "We are immensely proud of Lorna and all she has received. We are grateful too for the commitment she has shown to the on-going work of the college to transform lives in Moray, including being Guest of Honour speaker at our college graduation and bringing the Master Chefs of Great Britain up to Moray to enthuse and inspire our hospitality students."