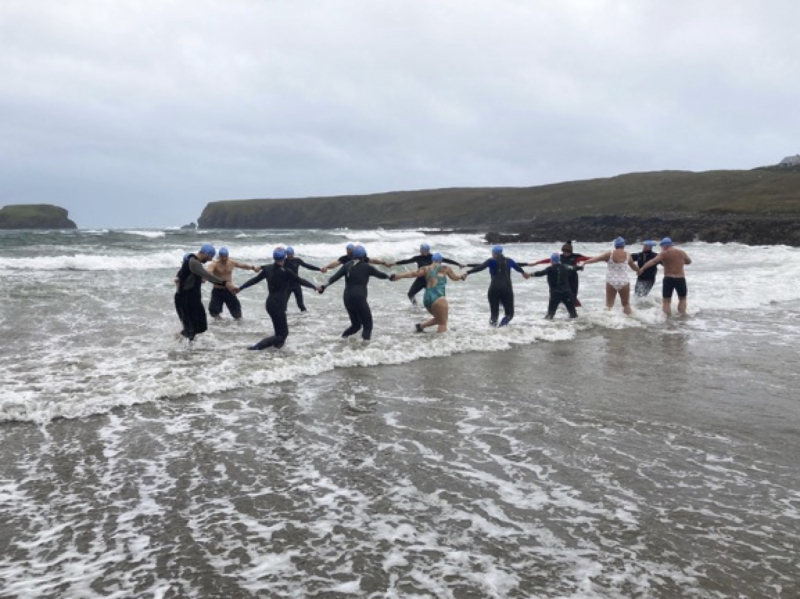 Bayble beach on Saturday October 23 saw the Seas of the Outer Hebrides project take their bid to find fresh new ways to find out what people want for marine management and Marine Protected Areas in the Outer Hebrides right out into the waves.

They explain: "Slowly the circle advanced into the sea. The waves rushed over our toes, crashed over our knees, encircled our waists.

"Suddenly there was a whooping, the circle was spinning and we were laughing and gasping as the cool water enveloped us.

"We were connected in a huge circular embrace, united in our collective joy, perhaps even a shared “madness” and most definitely a shared love for the ocean and its wildlife.

"It was a windswept beach in October in the Outer Hebrides, where we held the Cùram cuain (“embrace the sea”) event for the MarPAMM - Seas of the Outer Hebrides project on Saturday – 27 hardy souls on the beach in the strong winds…16 in the circle that entered the shallows.

"Why were we doing this?

"As part of the EU funded* MarPAMM project, “Seas of the Outer Hebrides” (SEASOH) is piloting fresh new ways to engage with stakeholders to find out what people want for marine management and Marine Protected Areas in the Outer Hebrides Marine Region.

"At this event we worked with artists Saoirse Higgins and Jonathan Ford to put a call out for communities with a passion for the sea to help us build a powerful vision for marine protection in the Outer Hebrides.

"As well as providing fishing grounds, the waters off Bayble beach are a Marine Protected Area for Risso’s dolphins and sandeels. The site was designated in late 2020 following a public consultation held in 2019. This is one of 39 designated marine sites in the Outer Hebrides for which SEASOH is working towards writing a management plan.

Saoirse and Jonathan reflected:“We gathered at Bayble beach on Saturday at low tide and waited in anticipation for the Hebridean Sea Swimmers and friends to arrive in force. The weather was wild, warm and energetic, as was our embrace of the sea that day.

"Exiting car changing rooms, dry-robed and ready for action, the swimmers were briefed on their mission to embrace the sea. Issued with specially designed ‘Cùram Cuain’ blue and orange swim caps we all headed for the beach.

"The performance began - the swimmers created their own group fathom (from Faedm - to embrace in Old Norse), holding hands to form a human circle on the sand, they edged their way in unison into the breaking waves; moving around in a circle in the water, creating their own sea orbit.  This was a special moment in time, connecting in body and mind with this area of protected sea. 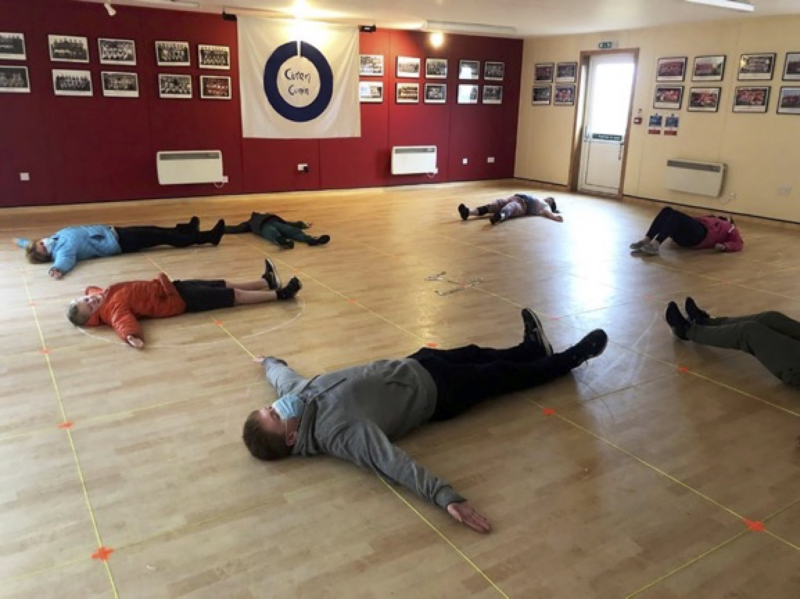 "The next stage of this two-part performance/event took us to Ionad Stoodie hall. Saoirse and Jonathan had spent the day before transforming the main hall floor into a luminous gridded “map” of the sea.

"This part was about placing each individual’s fathom onto the gridded map - connecting us as humans directly with the sea around us. Our “fathomeers” were paired up and outstretched arms finger tip to finger tip measurements were taken. Everyone’s individual fathom circles were chalk drawn onto the grid using a bespoke DIY fathom rope compass.

"Once everyone in the group had completed their circle, they lay down in it - think Leonardo Da Vinci’s Vitruvian Man. For a couple of relaxing minutes, a soundtrack of the sea drifted around the hall as we thought about our connections with the ocean.

"If you could ask the sea a question what would it be? If you could embrace something from the sea what would it be? Everyone had their own answers to these questions and left them with us as they departed the hall. Before finally leaving we had a parting gift for each person - a lanyard sea portal to capture their favorite sea view and email us the photo. In return we plan to post each individual their own personal fathom of the marine protected sea to adopt and cherish for the future.”

"Huge thanks to everyone involved in this work– the event participants, coastguard, artists and SEASOH team. All played their part in helping us to deliver a truly fresh format for engagement.

"This work will continue – please see here to find out how to be involved. Also, SEASOH will be consulting on management recommendations for MPAs in the spring. We will be asking what people think of a community-led vision for MPAs, who should be involved in their management and more. Look out for our consultation and make your voices heard!

Seas of the Outer Hebrides (SEASOH) is delivered by a partnership of Comhairle nan Eilean Siar, Marine Scotland, University of the Highlands and Islands and NatureScot.

The seven-partner MarPAMM project has been supported by the EU's INTERREG VA Programme, managed by the Special EU Programmes Body to develop tools for monitoring and managing a number of coastal marine environments in Ireland, Northern Ireland and Western Scotland.  The Special EU Programmes Body is a North/South Implementation body sponsored by the Department of Finance and Personnel in Northern Ireland and the Department of Public Expenditure and Reform in Ireland. It is responsible for managing two EU Structural funds Programmes, PEACE IV and INTERREG VA which are designed to enhance cross-border co-operation, promote reconciliation and create a more peaceful and prosperous society. The programmes operate within a clearly defined are including Northern Ireland, the Border Region of Ireland and in the case of INTERREG VA, Western Scotland. The INTERREG VA Programme has a value of €283 million and aims to address the economic and social problems which result from the existence of borders. For more information on the SEUPB please visit www.seupb.eu