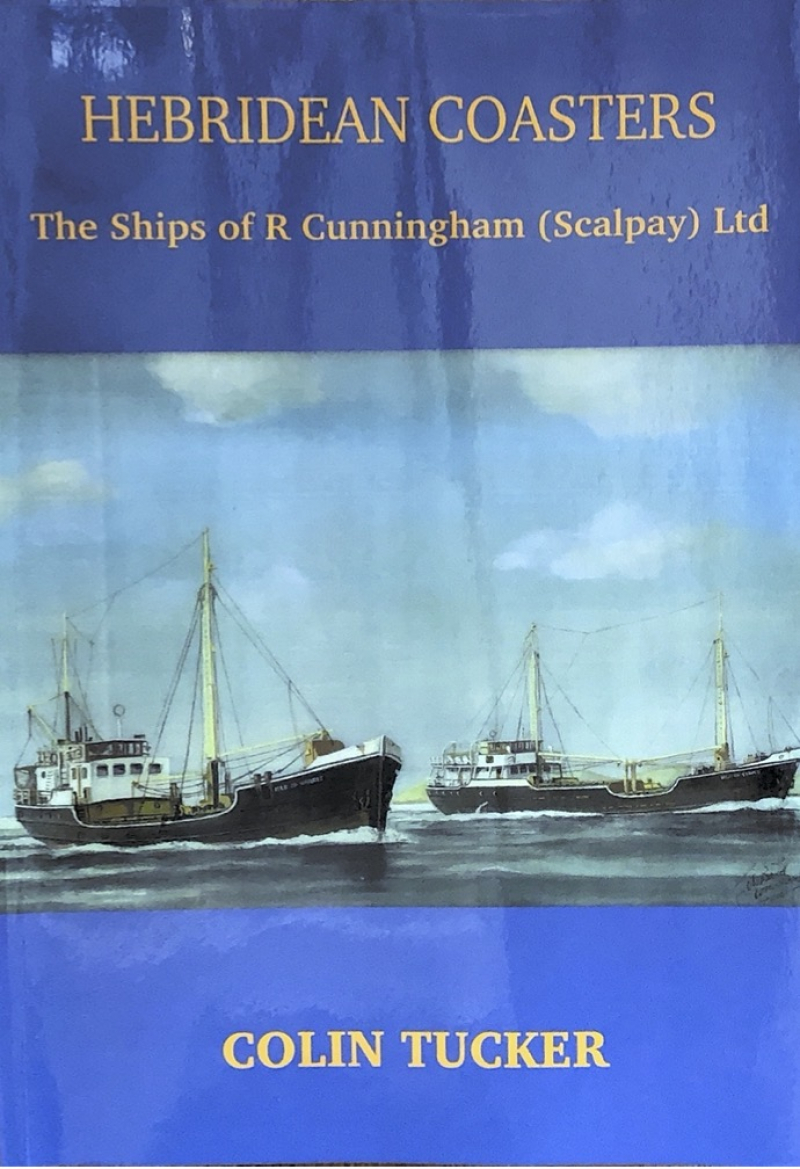 When our seaways led to Scalpay…

History can sometimes be news…and the publication of a very straightforward book called Hebridean Coasters: the Ships of R Cunningham (Scalpay) Ltd is one of those occasions.

It’s because it is another brick in a growing wall of evidence which challenges the orthodoxy of how history in the Western Isles is portrayed.

The prevailing picture of the islands – as advertised to visitors and would-be migrants – is one of isolation, empty beaches, and so-called wilderness.

The dominant traditional historical image in the background is one of crofting villages and subsistence agriculture.

The reality was somewhat different (writes Fred Silver, editor of EVENTS and welovestornoway.com).

The late great Fr Calum MacLellan pointed out to me more than 20 years ago that there was a paradox. In his childhood and when he was a young person on Eriskay, the island was far less isolated than it had become in the years immediately before the causeway was completed in 2000-2001.  This was because the sea used not to be a barrier but was the vital link between all communities, and not just small islands.

In 1843, a wedding guest travelling from Edinburgh to London after the marriage of James Matheson and Mary Jane Perceval, chose to make the journey by sea since, before the railways, that was the fastest way, although the voyage was stormy.

Family histories from that of Uist’s Flora Macdonald in the 18th Century, to the Metagama migrants of the 1920s, the back-and-forth movements between Lewis and Patagonia in the early 20th Century and even Rubhachs working in the car industry in Detroit in the 1960s who returned home to live, all show how travelling both back and forth across the Atlantic was constantly done.

The chronicles and records of the long civil war which spluttered across the Highlands and Islands from 1493 with the end of the Lordship of the Isles to 1746 and the Jacobite suppression, tell exactly the same tale…constant sea-borne traffic for raids, flights from authority, and of course, for trade and fishing.

The late Achmore-based historical writer John Marsden in his 1995 work, Sea Roads of the Saints, makes exactly the same point about life in the Islands in the 500-800 AD period – and then there is whole history of the Norse kingdom of the Isles ruled from the Isle of Man for centuries, and utterly dependent on maritime links.

The mid-18th Century saw Stornoway explode as an industrial centre, with tens of shipbuilding firms, for instance until iron-ships with engines started to sweep tradition aside from the mid-19th Century onwards.  It is no coincidence that Stornoway had in 1772 obtained official coats of arms for at least 10 guilds of crafts and skills. Or that it was able to defeat the Matheson family over the planned Garve-Ullapool rail link in 1892…or raise the money to build the original, far larger Town Hall opened in 1905.

Why bring this up as part of a commentary on a book about a Scalpay-based shipping line?

The Cunninghams’ international cargo shipping line did not erupt in isolation.  It was part of a wider history of island industry, entrepreneurship and skills which has been lost sight of because of the obsession amongst journalists and historians (often one and the same) with crofting rights and landlords, and distant marketing agencies and ‘influencers’ with so-called wildernesses.

So what has writer Colin Tucker, who stays in Coll on Lewis, made of R Cunningham (Scalpay) Ltd?

Colin has already published much excellent work on Isles shipping, the most recent being ‘Mary Jane and The Marquis... Steamship Communication to Stornoway 1819 to 1855’.

And he has followed an effective path again with this work, gathering together all the available data, plus personal, reminiscences of some of those involved.

One point which he makes – about the lack of cargoes out of Stornoway, compared to those coming in – I feel is missing the point.  The cargoes coming in were bulky items – coal, grain, salt and so on.  The exports were quite different, often less bulky – so there was an imbalance caused not by lack of activity but by the differing types of activity.

The start of the business can be traced back to the 1860s when Alasdair Cunningham travelled – at the age of 17 – to Wick to collect a boat called the Restless Wave.  This was the first of a succession of fishing smacks that were converted to cargo carrying.  Later on, the majority of the boats used came from the Netherlands – a demonstration in itself of the international nature of business at that time.  The crews, however, were from Scalpay.

Cargoes were of vital materials, such as coal and salt, needed for food preservation in that era.  Of particular importance was the supply of fuel to the islands’ many lighthouses.

Only in the 1910s and 1920s was it necessary to start equipping the line with engine-powered vessels.

A fascinating wee insight into pre-mechanical life – and life in a family firm – comes with an anecdote involving the Crinan Canal where if no horses were available, human power could be used to haul the boat through.  The book recalls: “On one such occasion, Ian Cunningham who was on holiday at home from his work as a carpenter in the Clyde yards, was hitching a free lift back to the Clyde, unleashed the harness and having a short fuse, threw the rope at the skipper’s feet with the retort: ‘You will not make a so-and-so horse out of me’, packed his bags, set off to Canada and spent the rest of his life on that continent.”

There are many photographs, both black and white and colour, and the insights into life on board – in storms and out – make great reading.  While the lists of ports served take me back to Fr Calum’s point.  The sea linked, not separated, in those times.  Ports included many all across the UK, Ireland, northern Europe and Scandinavia.

So why did it end?  Just as Fr Calum explained to me in his kitchen in Eriskay 20 years ago, it was roads and rules.  The final straw was a change in regulations that transferred the gas contract to the roads and roll-on, roll-off ferries in 1991.  And the trading activity of the last vessel of the line ended in 1993.

‘Well done’ to Colin Tucker for letting more light fall on the varied history of the islands and their many seaways.

The publication by Scalpay Historical Society/Comunn Eachdraidh Scalpaigh was made possible by grants from Scalpay Community Council; local Comhairle nan Eilean Siar councillors; and the Small Projects Fund of the Western Isles Development Trust.  The books sells for £12 (Plus £3 P & P) and is available by email from This email address is being protected from spambots. You need JavaScript enabled to view it. or via 01859 540488 or 07551 061891