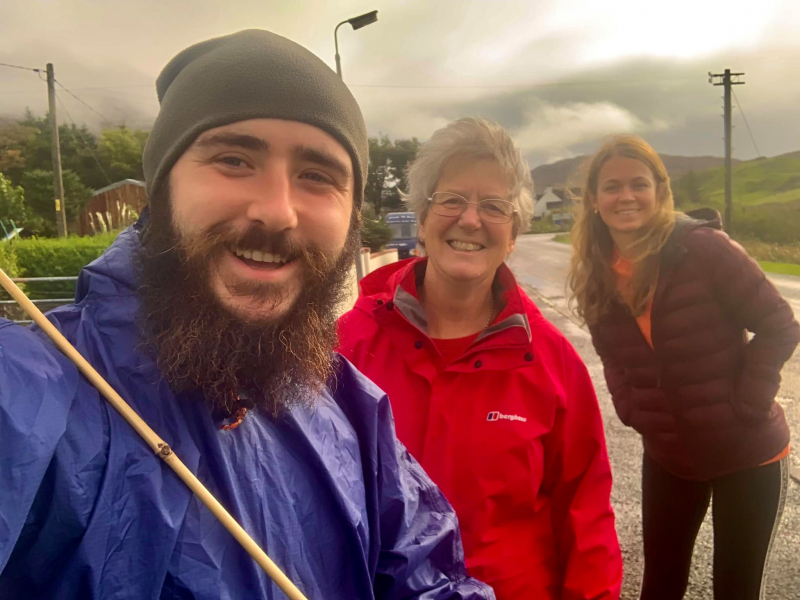 Army veteran Daniel MacNeil has given his heart to Harris, after a cold, wet and windy week walking around the island’s shores.

Dan has undertaken the mighty task of walking around the entire UK coastline to raise funds for SSAFA, the armed forces welfare charity which supported him through some dark times after he left the army.

A former gunner in the Royal Artillery, his departure from army life was sudden, coming alongside a diagnosis of a crippling illness which left him in constant pain.

That and the huge change in his circumstances put him into financial trouble and he plunged into depression, contemplating suicide and suffering daily until SSAFA got in touch and started to offer him support.

On his JustGiving page at https://www.justgiving.com/fundraising/danwalksuk Dan said: “Since returning to civilian life it has been tough for me dealing with chronic pain, depression and anxiety.

“SSAFA came and helped with my bills and lifted a weight off my shoulders and I can’t thank them enough for everything they have done.

“Lockdown has really challenged my mental health, especially not having a job and a decent routine. One day it came to me to start a walk around the coastline of Britain to help those who are struggling with civilian life.

“I’ve sold everything I own, all my materialistic things, and I hope to have some amazing experiences ahead!”

Having already walked around Barra, South and North Uist earlier this year, Dan crossed the Minch and spent much of the late summer in Skye.

When he boarded the ferry for Harris on Sunday (10 October) he was feeling tired and demoralised – and it showed on his live broadcast from Uig ferry terminal.

That’s when Harris magic kicked in, as Harris resident Iain Dowell met him off the ferry, donated to SSAFA and arranged dinner and a night’s sleep at the Hotel Hebrides in Tarbert.

Since then he’s been offered places to stay, fed from roadside food shacks and even handed chocolate and drinks through the windows of passing cars. One young boy staying at a holiday house ran up to the road with a bag of goodies when he saw him pass.

The generosity and kindness that have followed him all round Harris through this week prompted him to decide that the beauty of Harris’s landscape is exceeded by the beauty of its people.

Yesterday he said: “The people of Harris, you might not know it, but you’ve honestly touched my heart.

“The amount of love and support you’ve shown me, you’re all absolute legends! The generosity and the kindness you’ve shown me will live with me for the rest of my life. You’re all a bunch of amazing and beautiful human beings.

“The weather has been on and off like a light switch – it’s been sunny four times today and raining four times. I’m constantly putting on my poncho but that’s the Hebrides for you.

“People are amazing – offering coffee, teas, cash for SSAFA. You should be proud of the amazing community you have here. Not once did I stop smiling.”

Today (Friday 15 October) Dan is travelling from Tarbert up to Lewis to begin the rugged walk around the Lewis coastline – with offers of accommodation already posted to his Facebook page, where you can follow his progress at https://www.facebook.com/danwalksuk

He’s distinctive not only because of his SSAFA vest in bright red and blue, but because he’s carrying a flag over his shoulder to ensure people know he’s coming. The pictures show Dan with some of his roadside supporters around Harris this week, including Iain Dowell and a youngster holidaying on the west side of the island.