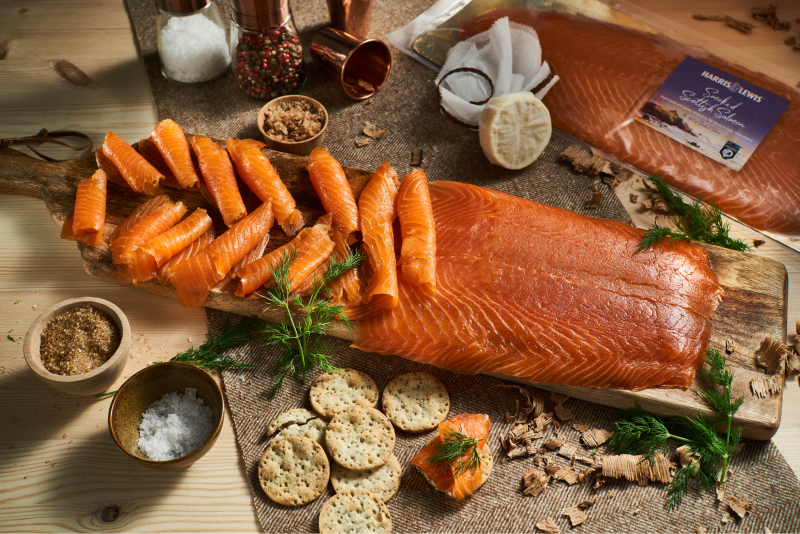 Out of 5,383 products worldwide to receive a Great Taste 1, 2-or 3-star accolade at the event in September, Harris & Lewis Smoked Scottish Salmon, produced by The Scottish Salmon Company, will now be able to display the unmistakable black and gold logo, a stamp of excellence recognised by retailers and consumers alike.

Judges described it as “melt in the mouth” and ”sublime”, tasting “a big smoky aroma but subtle enough to allow the delicate flavour of the salmon to come through”, noting that “the fish was beautifully cured with a perfect balance of salt and sugar and the salmon was light and clean without being oily – really delicious and cleverly done.”

Dani Redd, Editor of Great British Food said: "We received thousands of product entries to the Great British Food Awards, from artisans all across the UK. We were taken aback by the breadth and quality of what was on offer. After much deliberation, we managed to select a shortlist. These are products of the highest quality, which have been made with a great deal of care.

“The Harris & Lewis Smoked Scottish Salmon from The Scottish Salmon Company stood out for several reasons. First of all, its provenance; it has been an indigenous species on the islands for generations.

"Second, the company's commitment to sustainability. But finally, and most important, the taste of the fish itself - it has a firm texture and a salty taste that evokes the pristine island waters where it originated from.”

Su Cox, Communications and Business Development Director at The Scottish Salmon Company, said: “We are fully engaged with every step involved in producing our fish, ensuring full traceability and the finest quality Scottish Salmon.

“Each fresh fillet is hand-cured with Sea Salt and Demerara Sugar and gently smoked at our Harris & Lewis Smokehouse in Stornoway, giving it a beautiful intensity and rich flavour.

“Having only launched our online shop in March 2021, we are looking forward to displaying this badge of honour on Harris & Lewis range, in addition to our Native Hebridean Smoked Scottish Salmon which won a Great Taste Award last year.”

The Great Taste 3-star award-winning Harris and Lewis Smoked Scottish Salmon is available from The Scottish Salmon Company’s online shop, shop.scottishsalmon.com at £30 for a minimum weight of 900g.