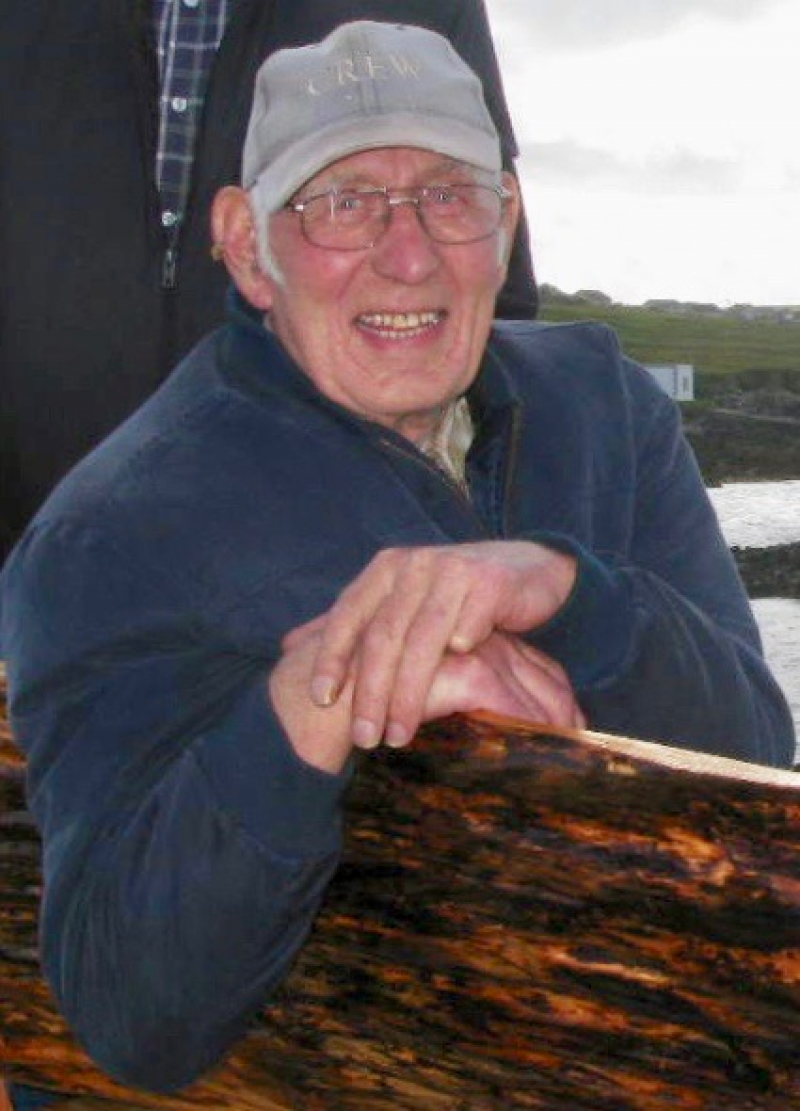 Villagers in Portnaguran described ‘a cloud of gloom’ settling over the village as news spread on Saturday evening (2 October) of the death of lifetime resident Kenneth ‘Kenniman’ Macdonald at Bethesda Hospice, at the age of 82.

Described as a quiet, kind and diligent man, Kenny loved and was loved by his home village, dedicating much of his later life to keeping the area trim and neat, and to sharing his knowledge and affection for the place with visitors and fellow-residents alike.

He took to himself responsibility over many years for renewing the gleaming white paint of the seafront and pier walls, for strimming and mowing the grass and for keeping the village litter-free.

Son Iain Eric said: “He was always there with the pot of paint, the strimmer or the mower. He had a sense of duty, was a diligent worker and was very proud of his village.

“He used to go to the pier to meet visitors, but he was never a gossip, was always respectful and never imposed his views on anyone.”

Born at 19 Burnside, Portnaguran, one of five children of John Macdonald and Isabella Campbell, Kenny left home at 16 to join the Merchant Navy. He travelled to ports all over the world, before returning home to marry Mary Ann Campbell of 11 Portnaguran and settle on her family croft.

After his marriage he worked as a welder and labourer at Arnish and later went offshore to work on a diver support vessel. With two sons, Murdo and Iain Eric, to support, he also had his own boat, the Seeker, at Portnaguran harbour and would fish and put out creels in Broad Bay.

Neighbour and brother-in-law Murdo Campbell said: “Once he was home from the Merchant Navy he felt, having travelled the world as a seaman, that he was perfectly happy just to be here.

“He was keen to support local initiatives, so he would go to Buth an Rubha once a week, to the community café at Aird and he would always be the first at the Young at Heart club, setting up the tables and getting the hall ready. Otherwise he would make a weekly trip to Stornoway for shopping and that was it.”

The maintenance and well-being of his village was extremely important to him, and he was one of a locally-convened committee which worked hard to enhance the surroundings in their corner of Lewis.

Murdo said: “We had a lovely committee of like-minded people and we created a picnic area and a walk around the village. In fact one of Kenny’s old fishing boats, the Isabella, became the focal point of the picnic site opposite the pier.

“While he wasn’t outspoken in meetings, he was a do-er, a grafter in the village. The work on keeping the village neat and tidy just started – he was never asked to do it, he just took it on.

“If there was anything to do he quietly got on with it. Others on the committee would arrange funding and he was more than happy to do the manual work.

“All spring and summer he was out painting and we would pick up litter and mess left by people having picnics or camping at the pier. He loved Portnaguran and he didn’t want anybody to mess it up.”

Visitors who stopped there or at the pier would often find themselves greeted by Kenniman, who would answer their questions.

Murdo said: “People would come to admire the view or to sit at the pier and he would go out to talk to them – visitors from all over the place who wanted to know about the village he loved.

“People would say to him ‘this is one of the most beautiful places in the island’ and he would come and tell us where they had come from and what they had said.

“He wasn’t a guy to blow his own trumpet, but it is beautiful, and he helped to keep it that way.”

Kenny leaves sons Murdo and Iain Eric, grandsons Munro and Finlay and sister Marann Morrison. His wife Mary Ann passed away in 2009. He is also mourned by a large circle of friends and neighbours, especially by his close and supportive circle at croft 11, brother- and sister-in-law Murdo and Fiona Campbell and neighbour Iain Thormoid Maclean.

Son Iain Eric said: “They were good friends and neighbours and always ready for a cèilidh. They kept each other going and they will miss him very much.”

The picture shows Kenny on a memorial bench to an old schoolfriend, overlooking Portnaguran, and the attractive effect of the white-painted walls of his village (Sandie Maciver/SandiePhotos).

(This article has been updated and corrected since first being published.)