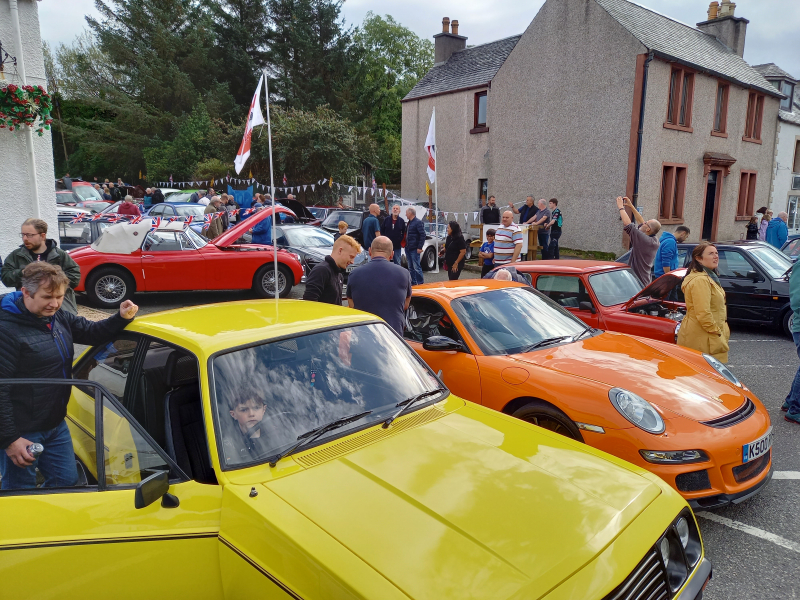 One of the biggest gatherings of classic, performance and unusual cars in many a year virtually brought traffic to a standstill in Stornoway on Saturday (18 September).

Malcolm ‘Kiwi’ Macleod had organised an end-of-season get-together for drivers as a celebration of everything on four wheels, the end of lockdown and last fling of the classics driving-out season.

His former workshop and yard at Bayhead was full to capacity with classic British cars including excellent examples of the Ford, Austin, Triumph and Jaguar marques, as well as some more exotic performance vehicles with names like Ferrari and Porsche on the badge.

Marshals helped the swelling number of vehicles park safely on both sides of Bayhead, but passing drivers still couldn’t help slowing down to look and there was a huge turn-out of walk-up enthusiasts anxious to see under the bonnet, and even to sit in, some of the unusual vehicles.

The whole event, including a free barbecue, was organised by Kiwi in aid of the Hebridean Men’s Cancer Group, many of whose members were also present on the day.

The final sum raised was a staggering £2,231.46, with Kiwi describing himself as ‘over the moon’ with the result.

He said: “There were twice as many cars as we expected and we had to get them parked on the road and all over the place to fit them in. It made it well worth all the effort.

“A big thank you to all who came along to make the day such a wonderful success. What a fantastic selection of cars and so great to see the young ones with the not-so-old pride and joys. I counted over 48 cars, and every car was and is local.

“A big thank you to all the helpers and barbecue ladies for making the whole day an enjoyable and pleasant experience, for the wonderful donations in support of the local Hebridean Men’s Cancer Group and to the local constabulary for looking after the traffic as we departed on our local drive towards Back.”

Pictures are by Martin Hall, Derek Mackinnon and Donnie Morrison.