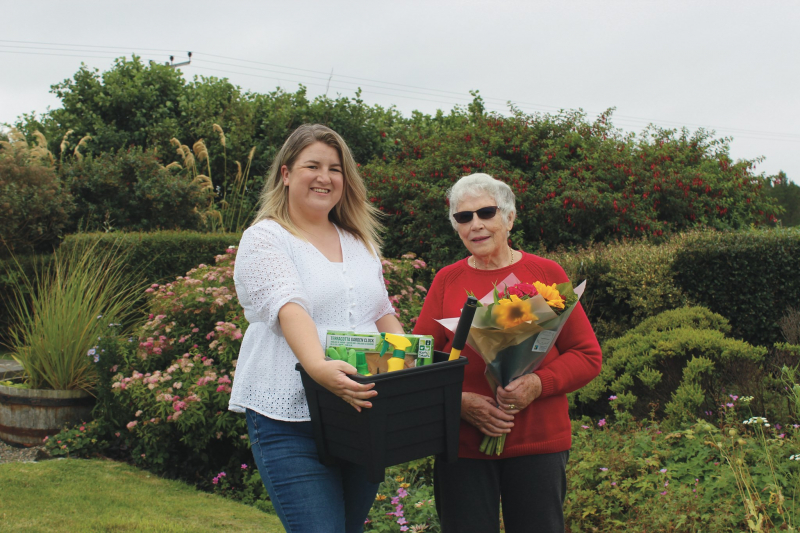 Lexy Pillans from Claddach Vallay, North Uist, has been voted winner of the first ever inter-island garden competition Uist in Bloom.

A total of 93 votes secured first place for Lexy, who entered on behalf of Taigh Sgìre Sholais. And as a result, £500 in prize money has now been awarded to the community centre in Sollas from contest sponsor Western Isles Lifestyle Lottery.

Iain and Mary Margaret Craib, who have together created an impressive community garden space at Church Hill, Griminish, were tied in second place with Gretta Campbell, who has cultivated a beautiful garden in Aird, also on Benbecula. The runners-up were each awarded a £25 voucher for Maybury Gardens for finishing with 60 votes.

North Uist and Benbecula Locality Planning Partnership organised the competition with gardeners across the islands invited to submit shots of their green spaces for a public vote conducted on Facebook. Each entrant was to nominate a community centre to receive £500 from Western Isles Lifestyle Lottery, should their garden triumph in the vote.

10 entries were received, representing nine local halls across South Uist, Benbecula and North Uist. Hundreds of votes were cast over a two-week period, with the highest number, 93, for Lexy Pillans and her colourful garden in Claddach Vallay.

Jemma MacVicar, development officer for the North Uist and Benbecula Locality Planning Partnership, presented an assortment of gardening equipment to Lexy (pictured above) and a £50 voucher for Maybury Gardens. 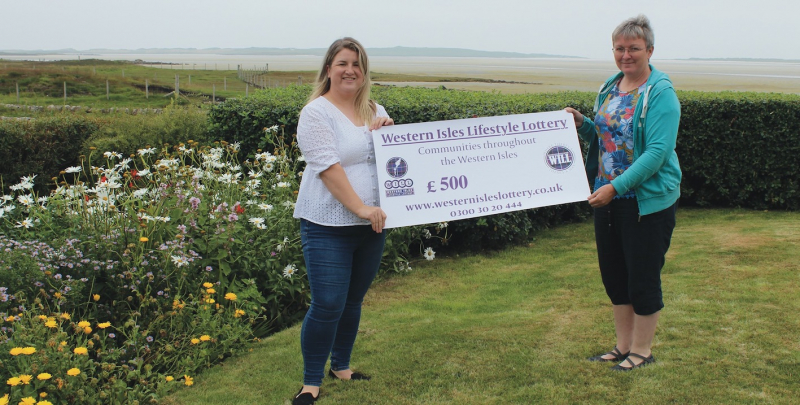 Above, Joan MacDonald, representing the Taigh Sgìre Sholais committee, accepted the £500 prize from Western Isles Lifestyle Lottery. Earlier this year a fire caused significant damage at the Sollas centre and the Uist in Bloom prize will go towards repairing the much-missed Taigh Sgìre Sholais.

“We were delighted to have had so many entries submitted for the first Uist in Bloom competition, said development officer, Jemma MacVicar.

“In addition to the entries, the number of community centres backed, across the islands, was fantastic. I think the appreciation people have for the amount of work these gardeners have put into their outdoor spaces to make them so beautiful is reflected in the incredible number of votes cast for all the entries. I want to thank everyone who took the time to enter and each individual who voted.

“It was a pleasure to present prizes to the first and second placed entries and to give £500 to Taigh Sgìre Sholais on behalf of Western Isles Lifestyle Lottery. It was decided that the competition would support a local hall as these facilities, which are at the heart of our communities, have had little chance to fundraise during the pandemic. Taigh Sgìre Sholais has been even more impacted as a result of the fire that broke out in the centre earlier in 2021. I hope the prize will go some way towards restoring a popular community hub on North Uist.”

Janet Paterson of Western Isles Lottery said “The first Uist in Bloom has been a huge success. The Lottery Team based in Stornoway work closely with sub teams across the Isles to share ideas and ensure the proceeds from the Lottery in each area are put to best use. A lot of hard work went into this year’s Uist in Bloom which greatly improved the aesthetics of the area and work has already begun to make next year’s event even more impressive with ring-fenced funding in place. The Lottery Team are proud to have sponsored such a great summer event and congratulate everyone involved for their efforts. Special mention must be made to Jemma MacVicar who we know worked exceptionally hard to make this such a success”.

North Uist and Benbecula Locality Planning Partnership was established in 2018 as an offshoot of the wider Outer Hebrides Community Planning Partnership. Jemma MacVicar was appointed as development officer for the partnership earlier this year, with her role established to bring together statutory community planning agencies, voluntary organisations and individual members of the community to develop and progress an action plan, which will have a meaningful impact on the way of life for residents of North Uist and Benbecula.

Jemma MacVicar continued, “We, at the North Uist & Benbecula Partnership, are so grateful for the support of the Western Isle Lottery which allowed us to launch Uist in Bloom.  The event has been a great success in bringing our communities together to celebrate the achievements of our enthusiastic gardeners while supporting their communities. The lottery also funded all the beautiful roadside floral displays around North Uist and Benbecula, which really have brightened up the area and again brought people together in enjoying the displays and volunteering to care for the plants.

“All the entrants would be worthy winners and it was certainly a close competition, however knowing the devastating impact to the Sollas community on being unable to use their much loved Taigh Sgire following the recent fire we really hope the money will help them to reopen very soon.

“Although the competition is closed, this just means planning begins for Uist in Bloom 2022, which will be bigger and better! With continued support from Western Isles Lottery we hope to expand the roadside displays, plant wildflower gardens and, hopefully if restrictions allow, have our 2022 competition in person with open gardens to allow our hard working gardeners to show their talents to their communities while raising money for local causes”.