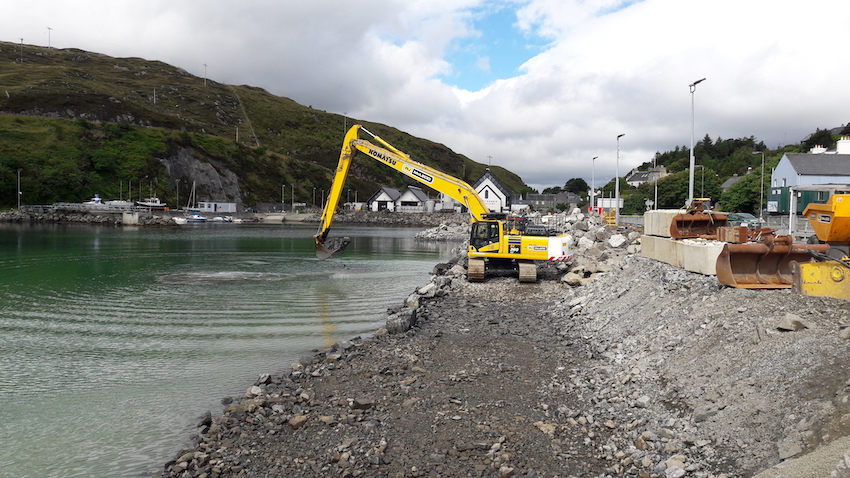 The decision to order two new car ferries for the Islay route sparked off a flurry of reactions…although no one mentioned how much more sensible it would be if the ferry procurement programme was organised with a steady flow of work.

With UK infrastructure enterprises it always seems to come as an immense surprise to those in charge that new equipment is constantly needed…the resulting stop-go approach to ordering totally wrecks the indigenous supplier network and at a UK level, has left the country unable to provide either its own trains or its own nuclear power stations.

Nonetheless, in a probably entirely unjustified burst of optimism, Comhairle nan Eilean Siar has welcomed the announcement that two vessels will be ordered, not one as previously announced, as part of the New Islay Ferry Project being taken forward by Caledonian Maritime Assets Limited (CMAL)

CMAL say that they have invited four shipyards to bid for the contract to build two new ferries for Islay – but none are in Scotland.

CnES Chair of Transportation, Councillor Uisdean Robertson said: “It is welcome that two additional ferries will be joining the CalMac fleet meaning there will be an opportunity to cascade MV Finlaggan to  another route.

"Comhairle nan Eilean Siar would welcome the opportunity to work with CMAL, CalMac and Transport Scotland on finding the best route for any vessel cascade and note that operating Finlaggan as a second ferry on Lochmaddy and Tarbert routes in Summer would be welcome.

"A second ferry on this route had been requested by the Harris Transport Forum in their recent meeting with the Transport Minister. At the same time the vessel could be used as a relief ferry throughout the winter.

"It is now imperative that CalMac engages with the Comhairle and other community interests in the Outer Hebrides and the West Coast around the best deployment of the additional vessels.  Many of the challenges we have seen with ferries over the past period has arisen from a failure to engage with and listen to Local Authorities and other local interests in the communities served by the ferries.

"It is essential that CalMac listens to the local intelligence and knowledge around deployment and capacity in order to alleviate the unacceptable ferry chaos we have seen over the past period and the consequent devastating social and economic impacts.  The Comhairle stands ready to work with CalMac and others to help return stability and reliability to the service.”

Of course, on previous experience, it's perfectly likely the new ferries won't be in service until the early 2030s but you can't fault CnES for trying to look on the bright side on this occasion.

Meanwhile, Highlands and Islands MSP Donald Cameron has said that the failure of a Scottish shipyard to secure the contract to build the two new CalMac ferries for Islay represents “a devastating indictment” of the SNP Government’s role in procuring new ferries for west coast communities.

The Scottish Conservative MSP said: “As this saga has gone on and on, it’s impossible to think of a more comprehensive failure to serve our island communities or, indeed, the wider public interest, than this latest development.

“This news represents a devastating indictment of the SNP Government which has now betrayed practically everyone interested in securing a reliable and resilient ferry service in Scotland, including those employed in the commercial shipbuilding industry.

“The priority now, of course, must be on getting the new ferries built and in service as quickly as possible – island communities deserve nothing less – but this catalogue of failure will not be forgotten or forgiven anytime soon.”

Unusually perhaps, Mr Cameron ends himself shouting out in the same end of the CalMac football ground as the GMB union.  Responding to news yesterday afternoon (Tuesday 14 September) confirming that Port Glasgow shipbuilder Ferguson Marine will miss out on an order to build two new ferries for CalMac’s Islay route, GMB Scotland Organiser Gary Cook said: “The manufacture of the ships Scotland needs will now be exported to the rest of the world – our commercial shipbuilding sector is mirroring the failure of our offshore wind sector.

“Ferries paid for by the public purse will be manufactured in Eastern Europe or Turkey, that’s jobs and value that should be coming to Inverclyde going abroad.

“This is the price communities pay for political failure, in over two decades of devolution Scotland still does not have an industrial plan that properly invests in jobs and infrastructure.

“You don’t need to look hard to learn the lessons of this latest bad news story or to understand why Scotland keeps losing the manufacturing contracts we desperately need.”