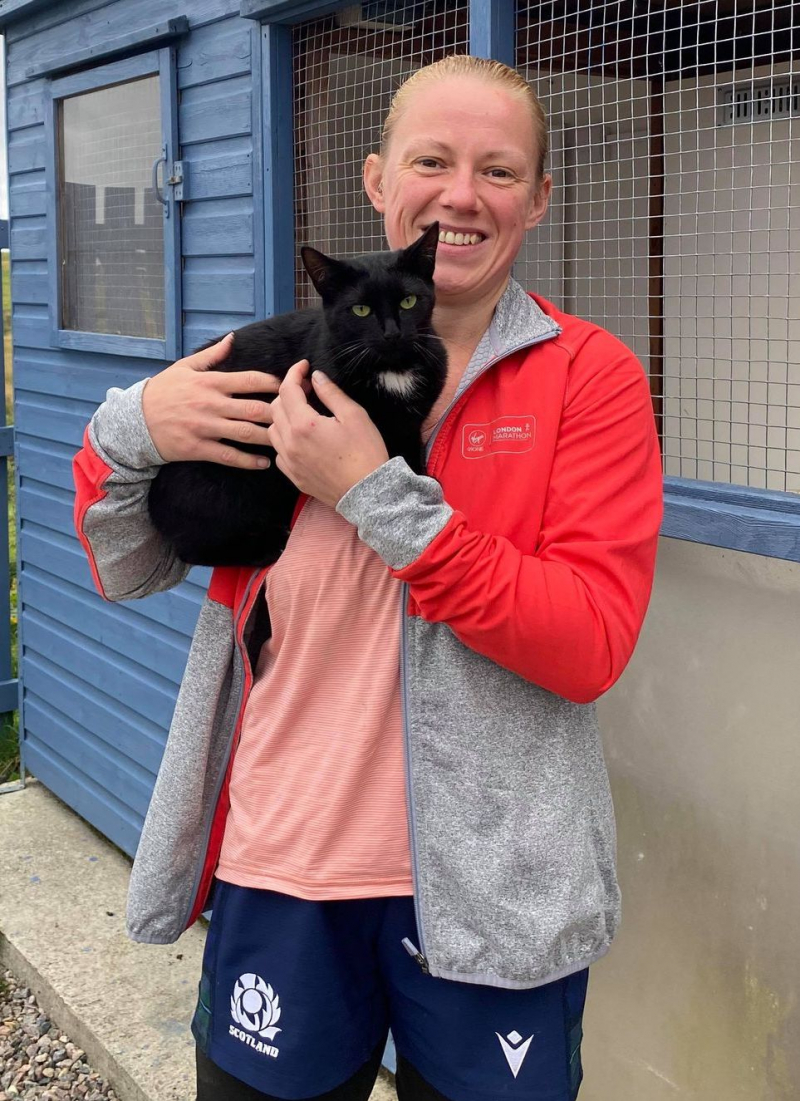 Some people will go to any lengths to support the cause they care about most – and Mairi Crate of Stornoway is one of those people.

Mairi has been a long-term volunteer with the island cat rescue group Western Isles Support for Cats and Kittens (WISCK), doing a regular shift as a pen cleaner and feeder for the rescue and feral cats which come into care.

Not only that, but she fosters kittens at home, sharing her home with seven furry fosters so far this year and making sure they are healthy, confident and people-friendly before they move on to be adopted.

Now she’s decided to go the extra mile – or 26 of them, to be precise – by running the virtual London Marathon 2021 on 3 October, in aid of WISCK and the armed forces charity SSAFA.

Mairi said: “This is my first marathon. It’s something that has always been on my bucket list and I felt, with lockdown and getting back into running again, now was as good a time as any to try.

“Unfortunately, because of the pandemic, it won’t actually be in London, it’ll be virtual, but the experience will be good all the same.

“I’ve been following a 16-week training plan called less is more. It’s three runs a week – a short three-mile one at the start of the week, a longer six-to-eight miles in the middle of the week and a longer run at the weekend.

“I’m currently on week 11. The distances increase each week and then, the week before the marathon, I’ll just be doing a couple of shorter runs to tide me over.”

Mairi is managing all of this round her daytime job as a clinical support worker for NHS Western Isles – and round her voluntary work with WISCK.

Needless to say it’s the kittens she cares for that have led Mairi to consider how she can help. In August WISCK hit the astonishing milestone of 56 cats and kittens in care at one time.

That means an awful lot of catfood, litter and vets’ bills that need to be supported and even greater need for volunteers able to give their time and effort to help look after stray and feral cats and kittens.

WISCK chair Cat Campbell said: “Mairi is such a great volunteer and does so much for us, it’s quite humbling that she’s added this huge fundraising effort to all the volunteering she already does.”

Mairi said: “Last year I fostered seven cats, but I also help with pen cleaning and feeding, so it felt like a lot more with all the cats and kittens that we had in. This year I have fostered four so far and had three more to stay for a few days, so there was never any doubt in my mind who the fundraising would be for.

“I am also supporting SSAFA, the charity who help support service veterans and their families throughout the UK. Both my grandfathers were in the navy, so I felt this, too, would be a good charity to support.”

Mairi’s sponsorship page is open at https://www.gofundme.com/f/nr2vn7-london-marathon-2021 and you can also donate to support her during WISCK’s street collection day on Saturday (4 September) in Stornoway town centre.