The new construction work under way on Goat Island in Stornoway Harbour which began this month comes after Stornoway Port Authority awarded £2.5 million worth of major contracts as part of a wider £12 million investment in its Newton Basin/Goat Island development.

The construction contract for a new marine engineering workshop has been handed to Ayrshire-based 3b Construction, alongside a large subcontract package to local company, Breedon Hebrides, whose history with the project dates back over 70 years with one of its predecessor companies having been the main contractor for the original Goat Island slipway project in 1950.

The project will provide two covered boat repair bays within the new engineering building, one of which will be available on a long-term lease, and the other on a short-term basis. This will provide a valuable asset that will allow local businesses to create skilled jobs and further utilise the port’s facilities.

Both the commercial and marine leisure markets will be serviced by this building and the facilities at Goat Island.

The overall project has been funded by a variety of bodies. Highlands and Islands Enterprise have approved finance of £3.5 million, while £2.75 million comes from Comhairle nan Eilean Siar and Scottish Government, via the Government’s Regeneration Capital Grant Fund.

Completion of the washdown is expected by late summer and the marine engineering building second quarter 2022. 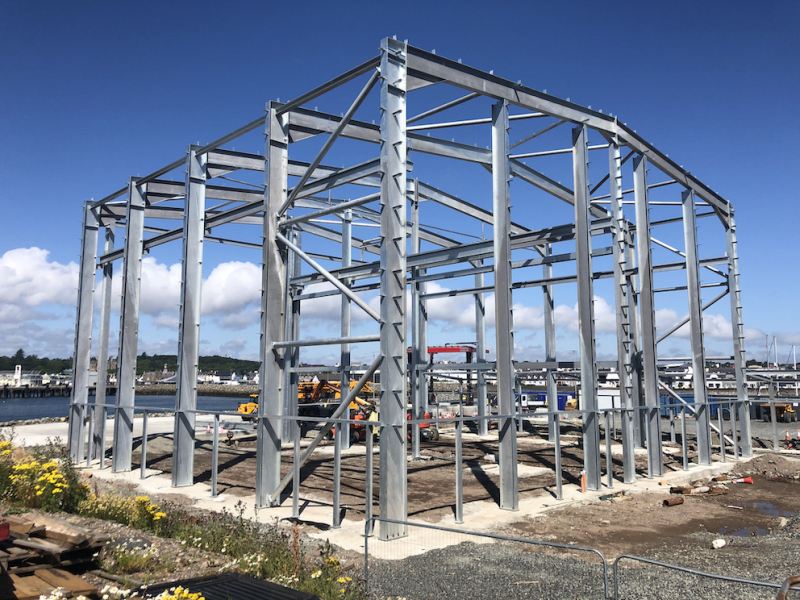 Alex MacLeod, Stornoway Port Authority chief executive, said: “This is a hugely exciting project and one that is central to the Port’s vision for the future. Partnering with the correct contractors is critical to ensure the successful delivery of the Newton Basin/Goat Island development, so we are delighted to be working alongside 3b Construction and Breedon Hebrides – two vastly experienced businesses with a track record of success.”

Donald Crichton, Chairman of the Comhairle nan Eilean Siar’s Sustainable Development Committee said: “The Comhairle is delighted to see the final part of the Newton Basin and Goat Island areas being concluded. Particularly pleasing is the way in which partners and stakeholders have worked together to support the £12m developments, improve the area, support creation of new jobs and offer state of the art facilities for the marine industry.”

Tom Arthur, Community Wealth Building Minister, said: “The ongoing programme of regeneration in Stornoway is seeing the revitalisation of the harbour and town centre with the establishment of a new commercial corridor, bringing about new opportunities for local business and employment in this important location in the Outer Hebrides.

"I’m pleased the Regeneration Capital Grant Fund has supported the overall progress that has been made so far and will help with unblocking land, leveraging investment, and bringing about new local jobs to Stornoway. Investing in our communities will ensure every part of Scotland recovers from the pandemic, helping build an economy for everyone.”

Rachel Mackenzie, Area Manager for HIE in the Outer Hebrides, said: “It’s great that the development of Stornoway Harbour has taken another step forward with the appointment of a contractor. We are really pleased to support SPA’s Newton Basin project which aims to safeguard the crucial role of the port as an economic driver in Stornoway and the islands. The development of the new marina will provide a valuable asset for local people and the new marine engineering workshop will retain existing jobs and create new jobs.”